A mere five months after the European Council agreed the roadmap to create European banking union, the first signs of disagreement are starting to appear among the members. The idea emerged almost a year ago as a mechanism to break the vicious circle between sovereign and bank risk and thereby construct a more robust monetary union. Now these disagreements are threatening the project's progress and have raised fears that the consensus will only be enough for a decaffeinated banking union.

The good news is that the first step, the establishment of the Single Supervisory Mechanism, is near completion. The figure of a sole supervisor, a responsibility that will fall to the ECB, was approved in May. Previously, and to harmonize regulation between different states, the directive was passed that introduces the new Basel III rules. Nonetheless, the new supervisor will not be fully operational until mid-2014. The ECB must not only hire new personnel but it also wants precise details on the situation of the institutions that will come under its supervision. To this end, they must undergo exhaustive audits, as carried out on Spanish banks last summer.

From this point on, consensus becomes more complicated. European authorities are still looking at two regulatory initiatives that, although they predate the idea of banking union, are crucial to progress being made in this area.

The first is the creation of a common regulatory framework that lays the foundations to handle future banking crises and facilitate the orderly resolution of institutions, as most European countries lack such a system. Among others, this framework will include rules on the allocation of losses among creditors of banks being resolved (the so-called bail-in) with the aim of minimizing the cost for taxpayers. The debate regarding these rules, which intensified after Cyprus's bailout, in addition to the order of priority for liabilities, includes the possibility of loans between the resolution funds of the different states or the contribution of deposit guarantee funds (DGF) to the cost of the resolution. Nonetheless, the aim is for the new framework to enter into force in January 2015.

The second initiative pending is the reform and harmonization of DGF so that all countries have a fund, pre-financed by banks, that is relatively the same size. Given the fiscal consequences of public guarantees for the DGF, this is one of the most delicate issues yet to be resolved and it is currently at an impasse.

The biggest disagreements, however, are arising from what should be the union's second pillar: the creation of the Single Resolution Mechanism (SRM). The controversy lies in whether it is possible to create, within the framework of the current European treaties, a single Europe-wide authority with full powers to act. In the opinion of the German Finance minister, Wolfgang Schäuble, for a single resolution authority to successfully carry out its work, it would require legal and coercive powers that are not covered by the current treaties, which must therefore be revised.

Until they have been revised, the German minister suggests that the SRM be implemented via the coordinated action of national resolution authorities, which would act under the aforementioned rules governing crisis management. Only the national funds would be available to finance resolutions although these authorities could resort to the ESM if necessary.

Certainly the design of the single resolution authority will have to take the issue of legal certainty very much into account. At the end of the day, the decisions it takes will have critical consequences not only for the future of banks but also for shareholders, creditors and potentially taxpayers. However, an SRM as planned by Germany would involve other, quite considerable problems. For example, mere cooperation between national authorities would not guarantee that decisions are taken in the interest of Europe's financial system as a whole. This has been acknowledged by the ECB itself which believes that, in order for the single supervisor to be effective, there must be an SRM with a single resolution authority. However, the fundamental problem would be the lack of a common resolution fund, preventing a total break between sovereign risk and bank risk. Sacrificing the goal that justifies the whole journey seems to be too risky a decision. 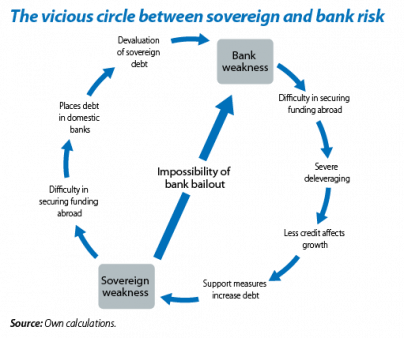