Almost 87 years have passed since «Black Tuesday», better known as the Wall Street crash of 1929. This terrible event was the beginning of a long period of worldwide economic depression. Among the consequences of this crisis were tougher regulations on the financial sector (in 1933 the Banking Act was passed in the US which, among other measures, introduced a deposit guarantee system and separated commercial and investment banking). We are all aware that this old acquaintance of the financial sector, the crisis, visited us again in 2008. Similar to the previous collapse, the main response by economic authorities has been aimed, once again, at strengthening the regulatory framework for banks in order to make the sector more robust and better able to withstand shocks.

This article reviews the most important regulatory reforms introduced over the last few years. But first, to understand these measures better, we will look at some evidence provided by the financial crisis. On the one hand, the sector's low levels of capital to withstand unexpected shocks made public aid necessary to recapitalise some banks, known as bail-outs. The crisis also highlighted deficiencies in the supervisory system, as well as systemic risks caused by banks deemed «too big to fail» but also groups of small banks which were «too many to fail». On the other hand, the crisis also led to the indiscriminate closure of wholesale markets, underlining the inadequate funding structure of some banks in relation to their business model.

One of the most important global regulatory measures implemented as a result of the crisis has been the reformulation of the capital framework, known as Basel III, which takes the form of the Capital Requirements Directive (CRD IV) in Europe, in practice establishing larger and better quality capital requirements, as well as introducing liquidity requirements to tackle adverse scenarios. To implement these greater requirements whilst also minimising the impact on financial stability, a transition period was established up to 2019. Nonetheless, a preference prevails among the various players (markets, supervisors, etc.) for fully-loaded ratios; i.e. once all the measures required have been applied in 2019. As a result of all this, the last few years have seen a continual rise in solvency, both in Spanish banks (with the exception of 2012, a year when high provisions were made) and European banks as a whole (see the graph). Although the Basel framework has evolved substantially with Basel III, it is fair to say that the previous framework which just started to be implemented in many countries when the great crisis of 2008 was about to erupt, Basel II, already represented significant progress in the measurement and management of risk in banks (although it did not arrive in time and certainly would not have been enough to prevent the crisis).

In Europe, another important regulatory event has been the creation of the banking union, a project arising from the sovereign debt crisis in 2012 and which fundamentally aims to separate sovereign risk from bank risk. With this goal in mind, the banking union has been built up on three basic pillars: the Single Supervisory Mechanism (SSM), the Single Resolution Mechanism (SRM) and the European Deposit Insurance Scheme (EDIS). The SSM came into force in 2014, giving the ECB the role of sole supervisor for all banks in the euro area, a task it carries out in coordination with the competent national authorities. In order to use a standard procedure to supervise and assess banks, the SSM has adopted a forward-looking, risk-oriented approach. This process, known as the Supervisory Review and Evaluation Process (SREP), analyses four key aspects: the business model, governance and management of risk, capital structure and liquidity structure of banks. This analysis allows the SSM, as a prudential supervisor, to set the capital and liquidity requirements for each bank.

The second pillar, the SRM, established a regulatory framework (the Bank Recovery and Resolution Directive or BRRD) with specific powers and instruments to intervene quickly financial institutions in difficulty, and at the lowest possible cost for the public treasury. One of the cornerstones of this resolution system is the internal recapitalisation or bail-in, which has come into force in 2016 and extends the obligation to absorb losses to the bank's creditors. Those liabilities that can be written down or converted into capital to recapitalise the bank («eligible liabilities») have been determined following a pre-established order of seniority: shareholders absorb losses first, followed by holders of hybrid and subordinated debt, etc. Recently some institutions, including the governor of the Bank of Italy and the IMF, have suggested that the new resolution framework should be more flexible, for instance allowing for the use of temporary public aid within the BRRD.

The third and last pillar is still being intensely debated. The aim of the EDIS is to ensure that all deposits within the banking union enjoy the same degree of protection irrespective of the bank and the country of origin. The proposal made by the European Commission, if accepted, would gradually be introduced in three stages, going from a reinsurance system (national systems could access the European fund once their resources had run out), a phase of progressive mutualisation via a co-insurance scheme (both funds would be responsible for costs) and finally full mutualisation (planned for 2024). Some governments, such as in Germany, are asking for progress in EDIS to be conditional on a reduction in the exposure of European banks to the public debt of their respective governments, most of which have high levels of debt.

The creation of the banking union should promote greater consolidation at a crossborder level which would help to improve banks' profits in a highly complex environment, as pointed out by the ECB. In any case, at present this consolidation is making slow progress as there are still considerable regulatory, economic and cultural barriers that limit economies of scale at a pan-European level.

The far-reaching changes entailed by CRD IV and the banking union create a great deal of uncertainty regarding how this new regulatory framework should be applied and operate. Although many of the initiatives reviewed here have already been implemented (or are in the process of being implemented), certain rules have yet to be tested (such as bail-ins) so there are still doubts regarding their effectiveness in practice. This regulatory uncertainty is affecting many other areas. For example, precisely in relation to bail-ins, all European banks must comply with a minimum requirement for own funds and eligible liabilities (MREL) which has yet to be specified and will force banks to issue new and relatively costly debt. Another example comes from the Basel Committee, which is reviewing both internal and standardized models to reduce the large, unwarranted differences in the weighting of risk assets (RWA) between different banks. Harmonising these models should not result in any significant increase in capital requirements but there is a great deal of uncertainty regarding the final impact. The Basel Committee is also reviewing the leverage ratio (a simple capital to assets ratio, without taking into account the risk of the assets), as well as the possibility of penalizing the treatment of sovereign debt, which is currently exempt from capital requirements. With a view to 2018, there is also the plan to introduce new rules for calculating accounting provisions regarding asset impairment (the Bank of Spain has just introduced some changes in the existing rules, a step in this direction). All this uncertainty harms banking and makes it even more difficult, if possible, for banks to bolster their eligible own funds and liabilities, as required by the new regulations.

Given this situation, several institutions, including those from several supervisory authorities in the Eurosystem, have demanded a period of relative regulatory stability to help both banks and supervisors to implement, effectively and coherently, the whole new regulatory and supervisory framework and to verify what effect this application may have in practice on financial stability. The European Commission initiative known as Better Regulation is aimed precisely at reviewing new regulations and simplifying them as far as possible, to ensure the cost of achieving their objectives is not too excessive. Ultimately this would lead to lower costs for financial intermediation. 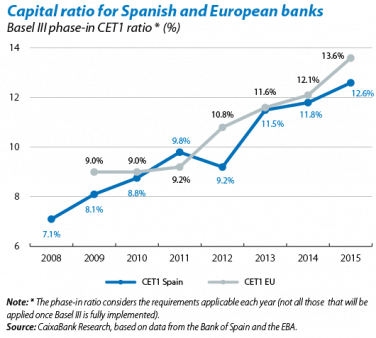