Spanish exports have been the main pillar of the economic recovery. However, the figures from the National Accounts for 2013 Q3 show that there has been a substantial deceleration: exports are still growing but at a slower rate. Specifically, in the first half of 2013, the year-on-year change in goods exports was 8.0% in nominal terms, while in Q3 growth has only been 4.4%. Thus, should we be worried?

The countries of the euro area are the main trading partners of Spain: 49% of the goods exported are destined for these countries. Therefore, an initial hypothesis is that the euro area's recovery has not been enough to maintain the dynamism of exports once these have recovered their pre-crisis volumes. However, this does not appear to be the case. In fact, exports to the euro area accelerated in Q3. Therefore, the explanation for this lower growth in exports must lie outside the euro area, the growth rate in Q3 being only 1.0% compared to the 13.9% year-on-year of the first semester.

We should therefore analyse in more detail the trend in exports towards some of Spain's main trading partners from outside the euro area: namely the United Kingdom, USA and China. These three countries account for 13%, 7% and 3% of goods exported outside the euro area, respectively. Growth in exports towards each of these three countries fell in Q3. The change in trend in exports to China was smaller while that of exports to the United Kingdom was somewhat more significant. However, the biggest change was in the exports to the USA, which grew by 5.1% in nominal terms during the first half of the year but fell by 12.1% in 2013 Q3. This shift in the trend of exports to the USA explains 17% of the drop in growth in Spanish exports between the first half of 2013 and 2013 Q3. 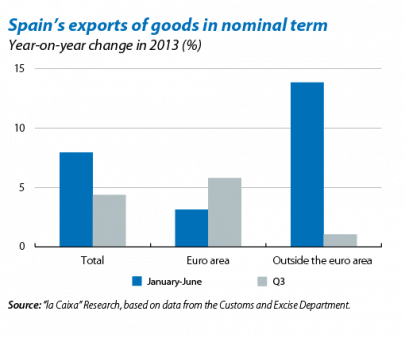 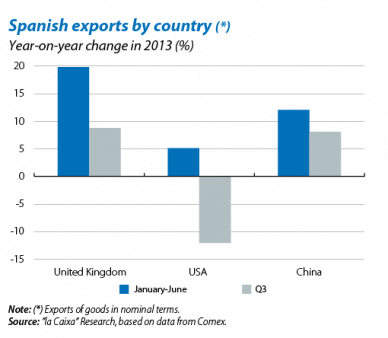 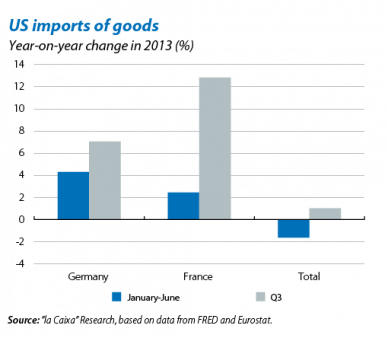