Household wealth by country: great differences and some reasons

The wealth of households reveals differences between euro area countries that seem surprising. This is what can be deduced from the first household finance survey at a European level coordinated by the European Central Bank (ECB). According to this, the median net wealth(1) of Spanish households in 2008, the year when the survey was carried out, was 182,700 euros. In Germany, however, it was just 51,400 euros in 2010. What lies behind these differences which, in principle, seem to contradict our perception of how income and wealth are distributed among Europe's countries?

Two factors explain these figures. Firstly, the share of households that own their main residence is very different between countries, ranging from 83% in Spain to just 44% in Germany. These differences are even more acute in the lowest income quintile: 78% of Spanish households own their residence while, in Germany, this figure is just 16%.

Given that, at a European level, most household assets are related to real estate, namely 69% of the total, fluctuations in house prices have a significant effect on their wealth. Since the survey was carried out, house prices have fallen by 26% in Spain while they have risen by 11% in Germany. Taking these movements into account, we can get an initial idea of the median real estate property of households that own a residence in 2012. In this case, German households have a median value of 199,800 euros, higher than the figure of 155,100 for Spanish households.

In short, there are certainly differences in wealth between Spanish and German households but these are due to specific factors. As long as the wealth of households continues to be concentrated in the real estate sector in Spain, it is likely to be more affected by fluctuations in house prices than other European countries.

(1) Net wealth is caculated by deducting the debt of households from their total assets. 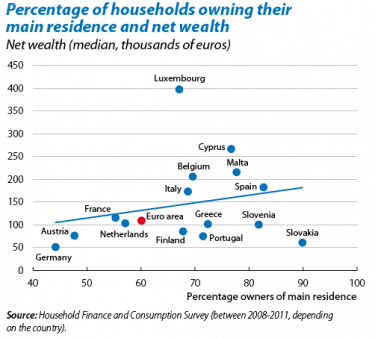 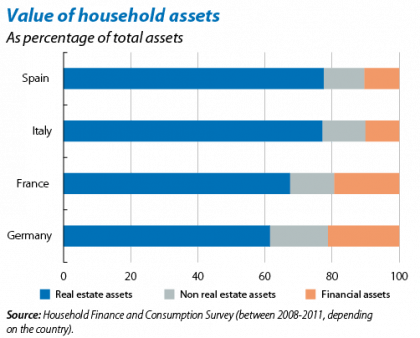 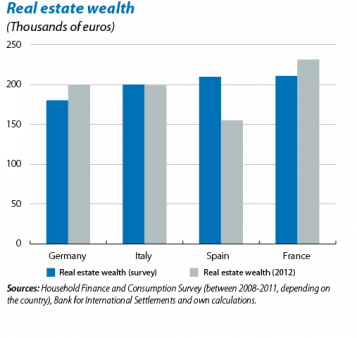