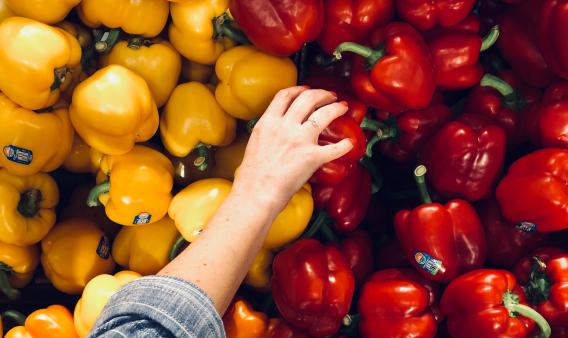 Young adults (20 to 39 years of age) in Spain and Portugal have been more severely affected than other demographic groups by a more volatile economic environment and the effects of the Great Recession. In Spain, household consumption has already reached almost pre-crisis levels on average, yet this is not the case among young people.

• The area in which young adults have cut back their spending the most in relative terms is transport (private and public, including expenditure on maintenance and repairs): its percentage relative to total expenditure has reduced by 2.3 pps between 2006 and 2017. The main reason for this drop is that the percentage of young adult households who had expenses related to cars they owned fell from 25% in 2006 to 13% in 2017 (in contrast, the average expenditure on cars per young adult household who had allocated money to this item remained virtually unchanged). This largely reflects a change in the preferences of young people towards more economical and sustainable modes of transport.

Young adults and housing in detail: from purchasing to renting

The factors that explain the drop in the proportion of home ownership in favour of renting among young adults are economic and sociological.

• Young adults have been the group most affected by the financial crisis. The average annual income of young people has been particularly penalised following the financial crisis, and this is in addition to the difficult labour conditions for young people, which have not been favourable for getting a foot on the housing ladder. Although the labour indicators at the aggregate level have improved since 2014, but they remain particularly weak for this group, as shown by an unemployment rate of 17% for young adults (20 to 39 years of age) in Q1 2019 or a very contained growth in wages.

• The meagre growth in wages makes buying a home difficult, in a context of a vigorous recovery in housing prices. As an example, the economic effort required from young people aged between 25 and 34 in order to get on the housing ladder has increased markedly between 2014 and 2016. Furthermore, although the effort required in 2016 was lower than before the crisis, it should be borne in mind that the conditions for accessing mortgage credit are now more demanding than they were in the previous expansionary cycle. For instance, households need to save a significant sum of money in order to get a mortgage, as demonstrated by the fact that the proportion of loans with a loan-to-value3 ratio above 80% represents just 13.1% of all mortgages granted in Q1 2019 (17% in 2006). As such, the initial deposit required currently constitutes a significant barrier to entry, amounting to 45,192 euros on average in 2016 according to Spain’s Emancipation Observatory, i.e. 2.5 times the average annual income of a person aged between 25 and 34.4

• The gap in the economic effort required to access home ownership between young people aged 25 to 34 and the total for all workers has increased since 2014, since the recovery in wages has not reached the young adult group. Specifically, the average gross earnings per worker increased by 1.3% in Spain between 2014 and 2016 but decreased by 3.8% for young people aged 25 to 34.

• Taxation has also had an influence due to the tax changes introduced in 2013, which removed the personal income tax deduction for investing in a primary residence and reduced the tax bias that favoured buying over renting.

• There has been a change of preference among young people in favour of a more flexible and footloose lifestyle (greater geographical and occupational mobility could be important underlying factors).

• In addition, the tendency to postpone key decisions, such as the age at which young people leave home or start a family, also leads them to delay the decision to buy a home.

The fraction of households with a young adult as the head of the family (aged 20 to 39) that had bought savings or investment instruments in 20145 was lower than the fraction of adult households aged 40 to 60 (see the table for more details). On the other hand, a larger fraction of young adult households had debts. There are also substantial differences between young households that are homeowners and those that are not. This is due to the fact that buying a home is the most important financial decision a household makes, due both to its value and to the fact that it represents the main instrument for the accumulation of wealth by acting as a form of savings mechanism.

• Liabilities: the percentage of non-homeowner young adult households that had taken out some form of non-mortgage debt in 2014 was 35.6%. This is a relatively high figure (although somewhat below the 40% of 2005) and quite similar to that of non-homeowner households between 40 and 60 years of age (41.6%). Therefore, more than a third of young people who do not own a home do, in fact, have other types of financial needs that lead them into debt, through both consumer loans and business loans (as self-employed workers and entrepreneurs).

1. To calculate this expense, we focus only on rentals at market rates. In contrast, when we look at the percentage of young people who rent, we are also including social rentals.

2. This is the rental value of a home under ownership. It is estimated by calculating what a tenant would pay for the same accommodation, taking into consideration factors such as the location and the facilities in the area, as well as the size and quality of the property itself.

3. This is the ratio between the mortgage amount and the value of the property acquired. The average in Spain for new mortgages stands at 65%.

5. Data from the household finances survey (HFS) of 2014, the latest survey available. 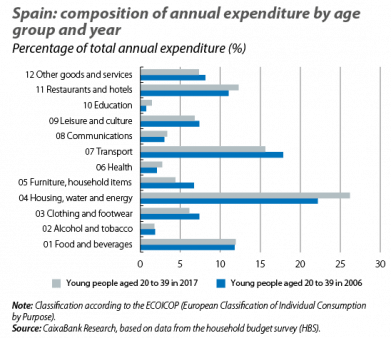 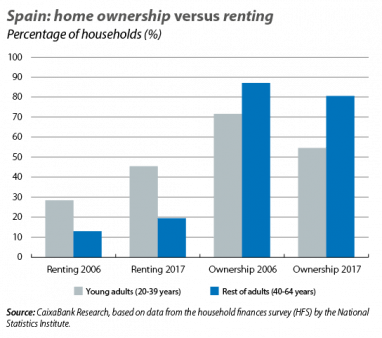 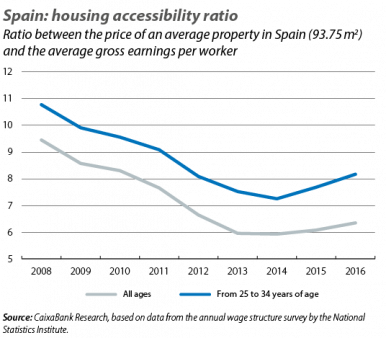