Malaysia’s economy has been remarkably strong with average annual growth of 4.8% between 2006 and 2016. And the situation looks like continuing. The IMF estimates the Malaysian economy will continue to enjoy growth rates of 4% to 5% over the next five years. The country also boasts solid macroeconomic fundamentals. Inflation is moderate at around 2% and the country has a large current account surplus (about 2% of GDP). Its fiscal deficit (3% of GDP) has also remained small in spite of a dip in revenues resulting from the slump in oil prices (the country is one of Asia’s major producers of gas and oil). Nevertheless, Malaysia is one of the countries most sensitive to episodes of financial volatility at a global level. A case in point occurred after Trump’s election in November 2016. Two weeks after his victory, the ringgit had depreciated by almost 6% against the dollar, one of the largest reductions for emerging currencies, while capital outflows were considerable. The gap between what appears to be a solid macroeconomic situation and investor sensitivity warrants investigation to shed light on how concerned should we be about this relatively unknown and small country in Asian terms (30.8 million inhabitants).

International investors seem to be most swayed by the country’s high exposure to economic and monetary policy in the US. According to the IIF, Malaysia is the fourth emerging country with the highest exposure (after Mexico, Korea and China).1 In particular, a sharper-than-expected rise in the fed funds rate would tighten up the financial conditions of some Malaysian companies as it could push down the ringgit and many firms have a considerable amount of debt in dollars. Looking at corporate debt in dollars as a percentage of GDP, Malaysia ranks second in Southeast Asia with 6.1%, only exceeded by Singapore with 6.7% and not very far behind Mexico or Brazil with 11% and 7.8%, respectively. It is therefore important to examine how the country might respond to such episodes. Malaysia’s response capacity depends on its exchange rate, whose fluctuation is controlled, and on its level of international reserves. This could once again be a source of concern for investors as the country now has less leeway. According to the IMF, its ratio of reserves to short-term external debt (remaining maturity under one year) is now below 1, suggesting a more limited response capacity in the short term.

Although any risk assessment must include such considerations, there are factors which might alleviate the most exaggerated concerns. It is true the country has a relatively high level of foreign currency debt. Gross external debt has risen sharply and now stands at 70% of GDP, very close to the typical thresholds of vulnerability for emerging economies. However, internationally Malaysia is a net creditor with a net international investment position (PIIN2) of 6% of GDP. It should also be remembered that many Malaysian companies benefit from natural hedging since they are exporters paid in dollars. And the central bank helps those companies without such hedging by offering financial products such as derivatives.

So the problem related to external financing is therefore minimal. But could the country be at risk from its excessive national debt, albeit not directly as a result of tougher international monetary conditions? Here the difference between a superficial glance and a more thorough examination is crucial. Total non-financial debt represents 191% of GDP, the highest figure in Southeast Asia. Household debt, representing 89% of GDP, is above the generally recommended threshold of around 60% of GDP.3 Nevertheless, when analysed in more detail we can see that the financial assets of households come close to 180% of GDP. Moreover, non-financial corporate debt is controlled thanks to the aforementioned natural and financial hedges, and the corporate sector exhibits a low NPL ratio. Public debt is relatively contained (56% of GDP) although one third is held by foreign investors, a larger share than in most emerging countries.

In conclusion, the country has solid macroeconomic fundamentals and prospects. Debt has certainly increased but, when studying the overall situation of the economy, there seems to be no cause for alarm. And although we must certainly keep a close eye on developments regarding the link between tighter international financial conditions and national impact, any episodes of doubt should be temporary and the positive long-term outlook should prevail. 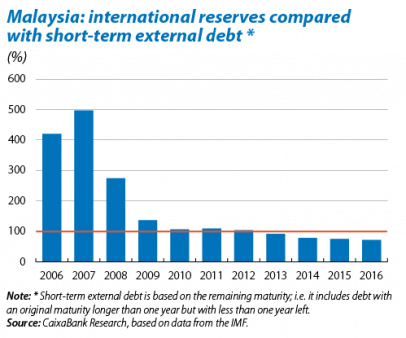