What are the best industrial policies for a globalised world? The answer is complex as we are currently witnessing a redefinition of what we understand as industrial policies and what their goals and tools should be. This is happening because globalisation and the emergence of new technologies have brought about a metamorphosis of industry, as explained in the article «Industry is dead! Long live industry!» in this Dossier.

The first obstacle we encounter in defining exactly which sectors should be covered by industrial policy is the very ambiguity of the term «industry». This term comes from the Latin word that originally meant «diligence and hard work». During the last century industry was associated with manufacturing companies but, as a result of the economy’s shift towards the tertiary sector, the concept of industry has widened its boundaries. Because of this, modern industrial policies must take into account the fact that industries also consume and produce services. The activities of pre- and post-production, such as innovation, design and marketing, can generate more value than the production of a tangible good per se. The American firm Apple is a case in point of this new «servitisation of manufacturing» and industrial policies must therefore be redesigned to include the changes the industrial sector is currently going through.

Historically, traditional industrial policies tended to adopt a sector-based and in many cases protectionist approach, supporting industries such as steel and coal. These policies might have been reasonable in post-war Europe to help rebuild the continent and boost sectors requiring heavy investment but this kind of policy makes no sense in today’s globalised world and given the new technologies that have reduced the minimum scale required for production in many industries. Moreover, the financial system is now able to fund large investment projects. As a consequence, new industrial policy has tended to adopt a more general approach, analysing the economy’s activities as a whole and determining what is expected from them. New industrial policy is therefore based on two fundamental actions. The first consists of creating the appropriate regulatory and legislative framework that respects copyright, does not inhibit innovation and ensures that services associated with industry can flourish. The second is to identify those economic activities that might be held back by faults in the market and, in turn, design policies to help these activities realise their full potential.

The first action is crucial as it creates a fertile breeding ground for entrepreneurship and innovation. The best way to foster innovation and R&D is by providing beneficial conditions for the development of new ideas and projects and, indeed, the graph shows that R&D expenditure is higher in those countries with a more favourable environment for entrepreneurship, measured by the World Bank’s ease of doing business index. It is essential to create a regulatory framework that guarantees contracts are fulfilled, that minimises the red tape associated with start-ups and strengthens legal security. The economy must also be encouraged to integrate within global trade so that new industry can reap the advantages of global value chains.

On the other hand, another important aim of new industrial policy must be to encourage servitised manufacturing and promote the synergies between industry and its associated new services. Some industries will decide to provide these services themselves while others will outsource them but, whatever the case, industrial policy must smooth the way for such processes.

Lastly, competition policy is another key element since, with the emergence of great technological innovations comes the risk of a few companies monopolising the markets, creating barriers that block any innovation by their rivals. To prevent such a situation, competition policy must promote national, active policies of competition, must keep markets open and get rid of any barriers to both entry and exit. The pharmaceutical industry in Switzerland, the car industry in Spain, the chemical industry in Germany and the computer industry in the US all epitomise the virtues of competition and of domestic rivalry between firms.

The second action mentioned above must be subordinated to the first because industrial policies can only correctly determine the functioning of markets and intervene wisely once the right regulatory framework is in place. In fact, industrial policies focusing on promoting certain specific sectors have historically tended to be relatively limited in terms of effectiveness and, a priori, there is no reason to think that the public sector has access to any more or better information than the markets to decide which sectors to allocate resources to. In fact there is the risk that the institution responsible for deciding where to invest public resources may be influenced by pressure groups, distorting the allocation of the resources even further. The most successful industrial policies have therefore concentrated on supporting R&D and the training of human capital. As far as R&D is concerned, the production of knowledge and innovation are public goods since the use of knowledge by one person does not diminish when it is used by another and this can discourage some companies from carrying out research and innovating. Because of this, it is important to combine a system of patents that encourages innovation through industrial policies that support basic research in order to increase the spread of technological advances. One example of how to implement such policies appropriately would be the allocation of R&D aid via public tenders and according to merit, prioritising high-tech activities that tend to suffer from credit constraints because they have high levels of intangible capital. The policies for training human capital are very closely linked to promoting innovation and industrial policies should improve the training of this capital when there is not enough private incentive in the markets. Investment in higher education and encouraging synergies between business and academia are just some of the ways to bring this about.

If we look at the European Union’s new industrial policy, we can see this has both good and bad points. Among the good points is the reduction in the relative weight of old sector-based policies, which went from 44% of all European Union aid to member states in 1992 to just 10% in 2012, according to data from the European Commission. However, all that glitters is not gold. The main problem is the EU’s productivity gap1 with the US as the European Union has not taken as much advantage of the opportunities offered by new technologies and R&D spending in the US is much higher. The main reason for this phenomenon is the small degree of competition in the EU’s new services. To boost competition, the agenda of reforms should be completed to bring about a single services market, reduce the fragmentation of European financial markets and eliminate regulatory barriers. These reforms are particularly pressing, for example, to create a bona fide European telecom industry. One indication that the European Union might be returning to old habits it seemed to have abandoned is the goal set by the European Commission for manufacturing to regain a 20% share of GDP by 2020 (this share was 15% in 2014). In addition to not being very realistic, this target does not take into account the fact that the relative share of traditional industry has fallen due to higher growth in industrial productivity than the average growth for the economy, as well as its integration with the services sector. European industrial policy should therefore focus on carrying out reforms on its regulatory framework to facilitate the expansion of new industry and its associated services.

In summary, industrial policy is currently undergoing a transformation in parallel with the production and technological changes occurring in the world economy. The main function of new industrial policy is to design policies that help the production sector to prosper and grow. It is not a question of favouring one sector at the expense of another but of creating the right conditions to foster innovation, growth and job creation. Such a task is motivating but not easy and Europe’s public powers would be well-advised to buckle down and get down to business as soon as possible. 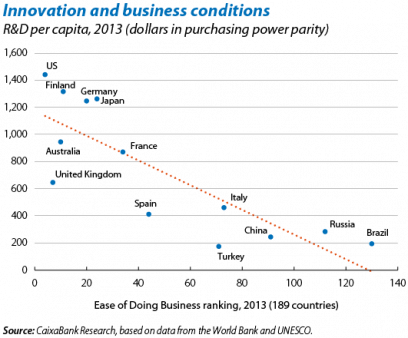