The entire international community is closely monitoring China’s change in its economic production model. This is a fundamental step for the Asian giant to enjoy more sustained and balanced growth in the long term. And if the country is successful, some aspects of this process could serve as a reference for other emerging countries aspiring to take similar steps and join the group of advanced economies.

This change in the model of production is based essentially on two areas. In terms of supply, the tertiary sector is becoming more important in detriment to the secondary. In this case the figures are astounding: the services sector has increased its share by 11.8 pp in the past 16 years and accounted for 51.6% of GDP in 2016. In terms of demand, household consumption is expected to take over from investment. A case in point is the change in trend observed since 2007 in the relative weight of household consumption. After a sharp comparative drop due to the incredible growth in investment over the past few decades, it has stabilised at around 37% of GDP and seems to be embarking on a slightly upward trend.

Another area that clearly shows the far-reaching transformation of the Chinese economy is the composition of its stock market index. Looking at the trend in the relative weight of different industries, we can see considerable readjustment.

Comparing the six main sectors for China’s stock market, since the start of the 2000s consumer industries have enjoyed the most growth. The industrial sector, on the other hand, has seen the least growth over the same period, in line with the country’s shift towards deindustrialisation (see the second chart).

These trends should get stronger in the future. In particular, the performance by the industrial sector is likely to get worse. On the other hand, the health and IT sectors should improve their performance as the Chinese economy becomes more tertiary. Consumer-related sectors should also become relatively stronger, particularly the consumer discretionary sector,1 which is likely to gain in importance at a more advanced stage of the country’s economic transition.

Of note is the exceptional performance by financials in China’s share index. In this case, however, we need to be cautious as one of the major challenges facing the Chinese economy is precisely how to reduce its ballooning levels of debt.

China’s equity market is still relatively unimportant compared with developed economies (48% of GDP compared with 146% in the US). The kind of companies included in stock market indices can also produce biases. However, the broad trends that characterise China’s economic transition are also reflected in the changes occurring in its stock market’s sector composition. This trend should get stronger as its equity market gains in importance and the economy becomes increasingly open to foreign investment.

1. The consumer discretionary sector is made up of non-essential goods and services that can be acquired by consumers (sports apparel, restaurants, automobiles, hotels, leisure, etc.). 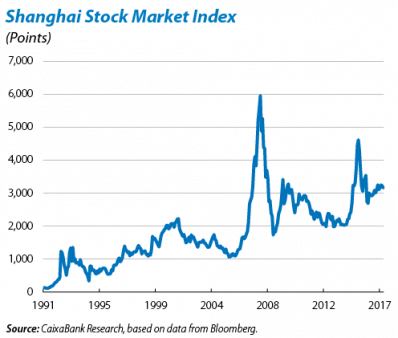 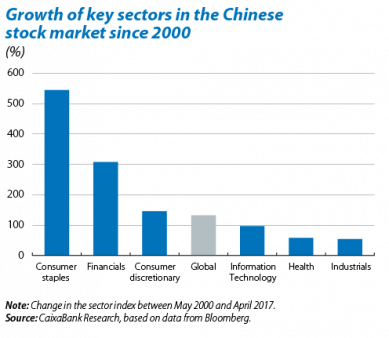