The coronavirus pandemic is having a severe impact on emerging economies. Around 100 countries, most of them emerging, are exploring the possibility of obtaining assistance from the IMF or expanding that which they already have in place. Are we entering into a new widespread crisis in the emerging markets like that of the 1980s and 1990s? 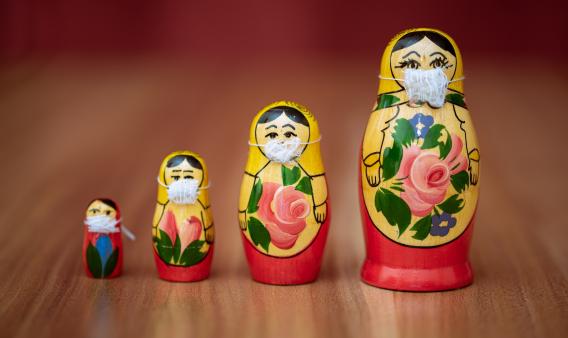 The coronavirus pandemic is having a severe impact on emerging economies. As we will set out in further detail below, the shock of the COVID-19 outbreak is being transmitted through real and financial channels both quickly and intensely. As a result, around 100 countries, most of them emerging, are exploring the possibility of obtaining assistance from the IMF or expanding that which they already have in place. What is going on? Are we entering into a new widespread crisis in the emerging markets like that of the 1980s and 1990s?

From what position are emerging economies facing the shock of the COVID-19 outbreak?

Recently, we thought that the economic health of the emerging economies was generally good, with the exception of a few already-identified cases, known as the fragile economies (such as South Africa and Turkey). Upon reviewing the major macroeconomic and financial balances, we can see this is still the case (see first table).

However, underneath this positive overall assessment lie certain vulnerabilities. The main one, by far, is that emerging economies’ level of indebtedness, either public or private depending on the country, has increased more than what should be advisable in the last decade. This is the case, for instance, with the levels of public debt of Brazil, Hungary and India and those of foreign debt of Turkey, Poland, Hungary and South Africa.

The real transmission of the COVID-19 shock

There is a great deal of uncertainty surrounding the future impact of the measures being implemented to combat the COVID-19 crisis. In order to assess the impact of the current crisis in each emerging country, it is also necessary to take into account their exposure to certain areas that are likely to be especially hard hit. Broadly speaking, the recession will be deeper for countries with a closer trade relationship with the US, China and the EU (where the pandemic is more prevalent); for countries more reliant on tourism (a sector that is particularly sensitive to the closure of borders); for countries with higher oil exports (which have plummeted due to the combination of a fall in demand and producers losing their grip on the supply), and, finally, for countries that are more dependent on the sectors hardest hit by the containment strategies (which we expect to end up being applied in almost all countries).

As is evident from the second table below, the major emerging countries are all exposed to these particularly vulnerable areas to some extent. However, Mexico, South Africa, Brazil, Russia and Poland are expected to experience a particularly pronounced economic decline.

The financial transmission of the COVID-19 shock

Various financial transmission channels have been activated in recent months – at an unusually high rate and with an unprecedented degree of intensity. Indices that seek to summarise how stressed or relaxed financial conditions are have registered a sudden tightening in recent weeks. For instance, according to Goldman Sachs’ global financial conditions index, which takes into account changes in interest rates and spreads for a set of developed and emerging economies, among other factors, the financial conditions have stood at levels similar to those observed in 2008-2009. This tightening has been accompanied by an unprecedented decline in the net inflows of foreign capital not seen since those years, as reflected by an extreme depreciation of the major emerging currencies against the US dollar (compared to the beginning of 2020, on the order of 20% in the cases of South Africa, Brazil and Mexico at the time of writing).

This episode points towards two weaknesses in emerging economies. The first is their dependency on foreign financing and, therefore, their sensitivity to a sudden stagnation of capital inflows. Although the current account deficits are not particularly worrisome in most emerging economies, the foreign funding needs, in gross terms, are clearly high in Turkey, South Africa, Hungary, Brazil, India and Indonesia due to the substantial levels of public and private debt repayments due in 2020. In the first two countries, there is also a low level of reserves, which could accentuate the liquidity problems.

The second weakness is the high exposure to debt denominated in US dollars. Once again, South Africa and Turkey appear on the lists, but so do Poland and Hungary if we swap the dollar for the euro or the Swiss franc. The conviction that avoiding a scarcity of dollars is key has led to the reactivation of the Federal Reserve’s swap lines with various emerging countries’ central banks. This certainly offers some assistance, although the experience of 2008-2009 and the sheer level of indebtedness in dollars both serve to warn us that this is only part of the solution.

Compounding the tightening of financial conditions and the dollar crunch, there is a third aspect derived from the doubts surrounding public solvency. Although the state of the public finances in general is not greatly alarming, perhaps with the exception of Brazil, what is of concern is the fact that a significant portion of public debt is denominated in dollars or other foreign currencies (over 10% of GDP in the case of Turkey, Hungary and Poland). The increase in risk premiums of sovereign bonds, as evidenced by the increase in the premiums of CDSs and some downward credit rating revisions (Mexico and South Africa, for example), suggests that investors perceive the countries of greater risk to be: Indonesia, Mexico (here the weak link is the quasi-state oil company Pemex), Brazil, South Africa and Turkey.

What is the margin for manoeuvre?

The reading so far highlights the importance of the real channels and, above all, the financial channels in the transmission of the shock of the COVID-19 outbreak in emerging markets. Can they do anything about it? The available margin for manoeuvre varies greatly depending on the country and the aspect of economic policy that we take into consideration. With regards to the fiscal position, with the exception of Brazil, the available margin is fairly large, although perhaps insufficient to fully absorb an economic and financial shock on the scale of the COVID-19 crisis. Less obvious is the margin available to monetary policy, since in most emerging economies the real interest rate is negative or very low and the incidence of unconventional monetary expansion measures is, in practice, an unknown, given that it is unexplored territory.

For the time being, most emerging countries are taking fiscal policy action through a combination of state guarantees, deferrals of tax and Social Security payments and advances of social transfers similar to those we have witnessed in advanced economies. The fiscal response from emerging economies is also similar to that of advanced countries in that there is significant disparity in their magnitude: some countries, such as Mexico, are being rather unambitious, while others, such as Russia, are mobilising more public resources. As for monetary policy, the offence is taking the form of reference rate cuts and some macroprudential actions.

An uncertain future... which could rapidly change

These actions, while necessary, are not going to be the only factors that will determine how emerging economies’ macroeconomic and financial situation will develop in the near future. The key part of the match, as previously mentioned, is being played away from home: it is critical that the recovery of the advanced world is as quick as possible and that the financial tensions are contained. The uncertainty regarding both aspects is extreme, and yet we shall nevertheless venture to sketch out some potential future scenarios.

If the predictions for the fall and recovery of growth are fulfilled, in general terms the emerging economies analysed herein will register severer recessions in 2020, before recovering some of the lost ground in 2021. The danger here, as in most economies, is that the impact turns out to be less temporary than expected and ends up causing permanent income losses, which could have major social and political implications. Although serious, this is not the most dangerous aspect, at least in the short term.

The greatest danger lies in the risk of a far-reaching financial crisis occurring. While it is almost impossible to identify the ways in which this could materialise, the paths that could lead to this financial collapse may already have been revealed: an intensification of external vulnerabilities, the dollar crunch, depreciatory pressure, new tightening of financial conditions and doubts over sovereign solvency.

Let us return to the initial question: are we on the brink of a global financial crisis in the emerging economies? The odds are not low. In contrast to the conclusions drawn in the immediate past, the major conclusion of this Focus is that the group of potentially fragile emerging countries encompasses all – or almost all – of them. If the financial tensions worsen, as has happened in other major crises such as that of the late 1990s, then contagion would be likely and the duration uncertain, and it would almost certainly come in various waves. None of this is inevitable, but for everyone’s sake we trust that decision makers will continue to act swiftly and, in the case of the major central banks, in an ambitious and coordinated manner. 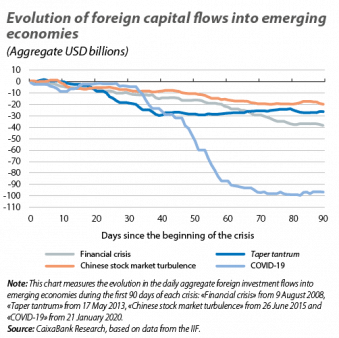