The recent recovery in emerging currencies is being interpreted either as the beginning of a more lasting regime change or a temporary upward trend. We explore the macroeconomic fundamentals and market dynamics to determine which side has the most arguments. 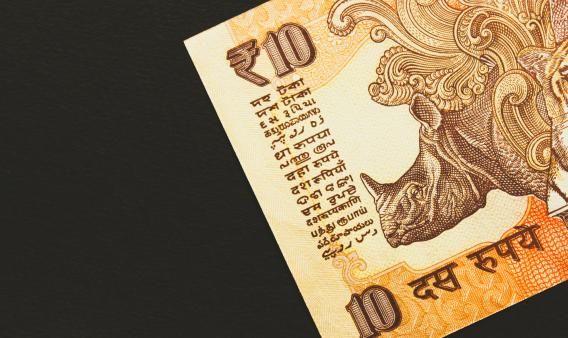 In the past year, emerging currencies have endured significant downward pressure, with some currencies suffering a complete collapse. In the last 12 months, the major emerging currencies as a whole have depreciated by more than 9% against the dollar, with the Argentine, Turkish and Brazilian currencies losing over 20% of their value, while those of Russia, South Africa, Mexico and Colombia have suffered double-digit declines. This loss of value has also occurred in a context of significant volatility in emerging currency exchange rates, which surged in March to levels not seen since the tumultuous summer of 2018. Both the loss of value of many emerging currencies and the uncertainty currently surrounding them pose bad news for economies that have taken extensive advantage of the favourable financial context of recent years to borrow in dollars (for instance, the total dollar-denominated debt of Turkey's non-financial firms and government is equivalent to 26.3% of GDP).

In this context, the recent recovery of emerging currencies – which, it must be said, has not been without its ups and downs – has given rise to the logical expectation that we may be on the doorstep of a more long-lasting regime change. But there has also been no shortage of voices suggesting that this improvement will be only temporary. In order to determine which side of the argument has more merit, we must explore two major aspects: macroeconomic fundamentals and market dynamics (in particular, shifts in so-called carry trading).

Emerging currencies and macroeconomic fundamentals: less pressure than in the past, but with some currencies in the spotlight

While they may not serve for predicting short-term currency fluctuations, macroeconomic fundamentals can help us to identify underlying trends that may apply either upward or downward pressure on exchange rates. According to the IIF, which develops one of the leading models for assessing how exchange rates react to macroeconomic fundamentals, the imbalances in terms of currency exchange rates are not excessive, although there are significant discrepancies in certain cases (see first chart).1 For instance, despite their notable depreciations in the past year, the Argentine peso, the Turkish lira and the South African rand are still overvalued in effective and real terms.2 At the other end of the spectrum, and once again according to the IIF, the significant depreciations of recent months have left several Latin American currencies clearly undervalued (the most obvious example being the Brazilian real, although the Chilean and Mexican pesos are also candidates), together with the Polish zloty, the Chinese yuan and the Russian rouble, to name just a few of the most important examples. 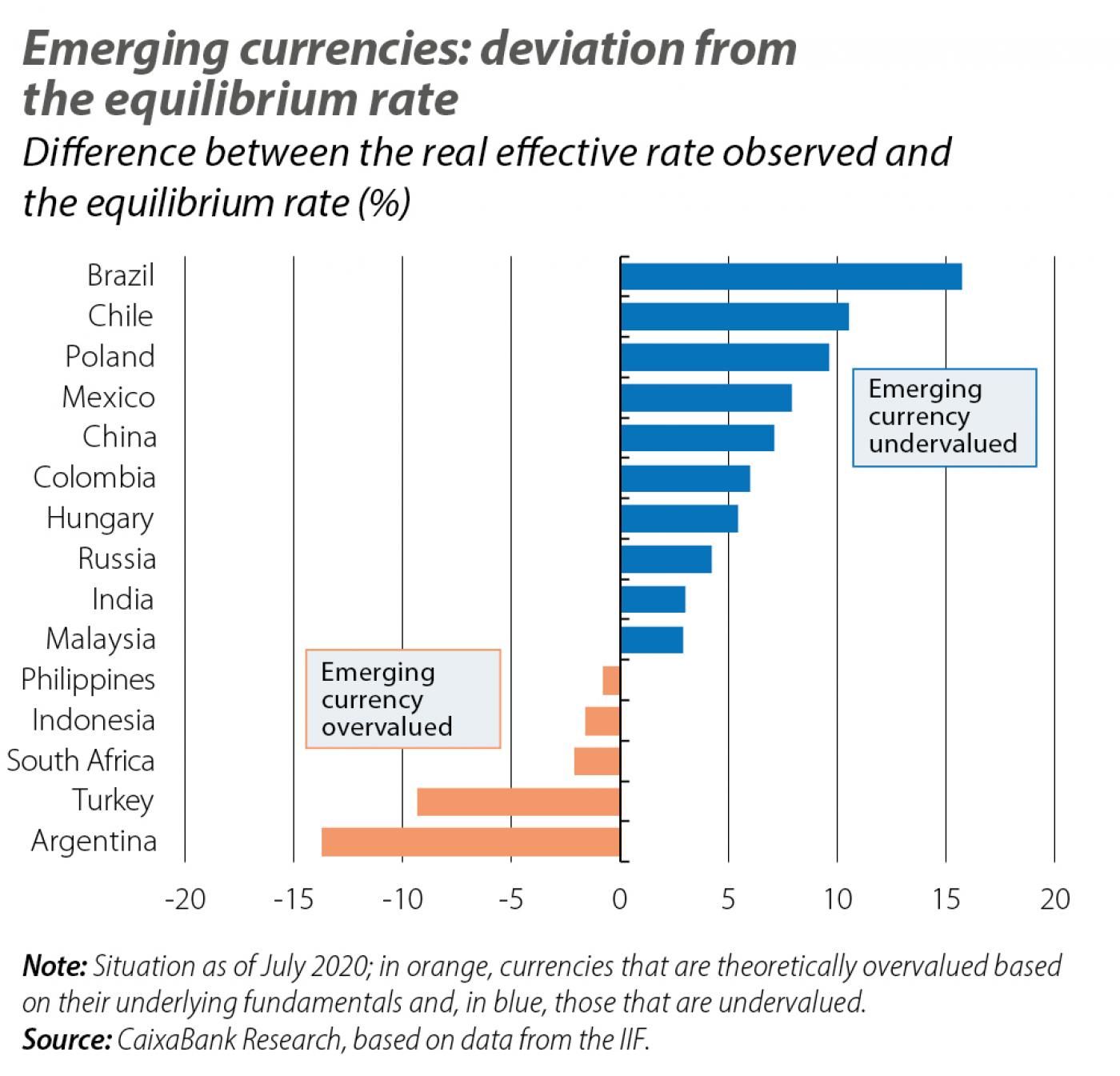 Broadly speaking, the gaps between actual currency exchange rates and what could be considered their equilibrium levels based on the underlying fundamentals are somewhat narrower than those estimated a year ago. In most cases, this is a result of the significant depreciation that emerging currencies have suffered in the current year to date, although it is also related to changes in many emerging currencies’ current account balances. Specifically, for the bloc of emerging economies as a whole, the current account balance went from 0.98% of GDP a year ago to 0.62% today (with a bigger adjustment in countries with a surplus than in those with a deficit).

The factor behind this widespread trend is the shock of the COVID-19 pandemic, which requires us to take the IIF’s results with a pinch of salt. On the one hand, there is a great deal of uncertainty surrounding how the pandemic will develop over the coming quarters, as well as regarding what effects it will have on the economy in the medium and long term. If the crisis is long-lasting, then the various structural variables that determine the equilibrium current account balance can be expected to undergo changes. However, in addition to the structural element captured by the equilibrium current account balance, there are other macroeconomic aspects that could play an important role in the short term, and these will tend to apply downward pressure on several emerging currencies. In this regard, the main vulnerabilities include doubts over the state of the public finances in countries such as Brazil, South Africa and India; geopolitical risk in countries such as Russia; inflationary pressures, once again in Turkey in particular, and the scarcity of international reserves (and here we must repeat the names Turkey and South Africa).

Emerging currencies and market expectations: less support from the spread in rates

It is well known that, in the short term, financial drivers influence exchange rates more than the supply and demand that arises from currency payments in international trade. In fact, financial positions are vastly more important than commercial positions: according to figures from the BIS, in 2019 an equivalent of 6.6 trillion dollars a day was traded on the foreign currency financial markets, while according to the WTO global trade in goods and services amounted to 25 trillion dollars a year. So what are the exchange rate expectations of players in the currency market?

The consensus of market analysts, who incorporate into their diagnosis both exchange rate trends of a strictly financial nature and macroeconomic considerations, suggests that the long-term view (one year from now) is not all that different from the one presented in the previous section. Specifically, emerging currencies are broadly expected to appreciate against the dollar up until the end of 2021, with the notorious exceptions of Turkey and, with a less significant depreciation anticipated, South Africa, Mexico and the Philippines (see second chart). Nevertheless, the market is less optimistic in the short term, as it expects there to be downward pressure on the currencies of Mexico, South Africa, China, Chile, Malaysia, India and the Philippines in the next quarter. 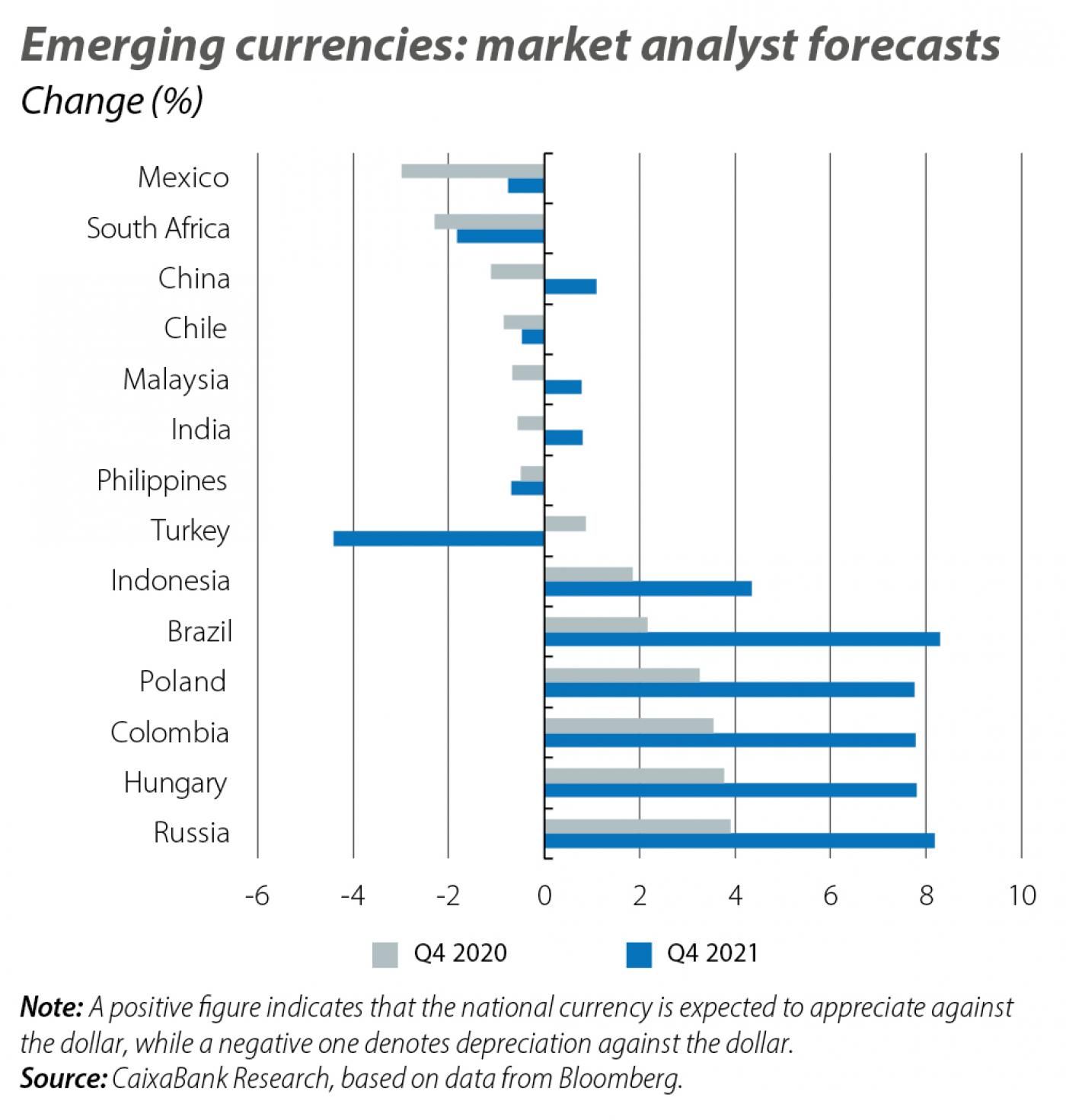 The combined view obtained from reviewing both the macroeconomic variables and the latest market developments suggests that the recent respite in the volatility of emerging-currency exchange rates should not be taken for granted. The downward pressures on some emerging currencies could end up being significant.