Financial (re)integration in the euro area

One of the main achievements of the euro, financial integration, has broken down. With the outbreak of the sovereign debt crisis, conditions to access credit once again depend largely on the geographical origin of the economic agents in question. In other words, the disparity of credit conditions between countries has increased and Europe's monetary and debt markets have become re-nationalized. Analyzing the underlying reasons for this financial fragmentation is key to understanding its implications and possible long-term solutions.

The credit conditions of bank loans under a million euros, those most used by SMEs, show the greatest disparity. Between January 2010 and January 2012, the interest rate for new loans to SMEs in periphery countries rose by 1.7 percentage points while this rise was only 0.3 points in the core countries. It is true that such disparity in interest rates partly reflects the credit risk of lending to firms located in countries experiencing a harsher recession. But it is also due to the greater financing cost borne by banks in the periphery as a result of the sovereign debt crisis. As from the beginning of 2010 when the Greek crisis worsened, yields on sovereign debt rose, first in Greece and then in the rest of the periphery countries, due to fears of a euro break-up. The consequences for the banking sector were immediate: it was increasingly difficult to secure funding in the markets and, even when this could be obtained, it was notably more expensive. The most pressing liquidity requirements could only be met by resorting to the ECB. This ended up affecting both banking and company activity, deteriorating even further an economic activity that was already highly depressed.

The path towards financial reintegration must be embarked upon as soon as possible but this is not simple. First, it is necessary to reinstate sources of bank funding in periphery countries. In this respect, the advances made in creating banking union are crucial. For the time being, the ECB's announcement of the OMT programme in August 2012 has dispelled the risk of the euro area breaking up. As a result, tensions in financial markets have diminished to a large extent: bank debt markets have reopened in the periphery countries, banks have reduced their dependence on ECB funding and yields on sovereign bonds have fallen considerably. These improvements are gradually being passed on to the financing conditions for SMEs: between August 2012 and March 2013, the interest rate on bank loans under one million euros fell by 0.2 points, both in the periphery and in the core.

However, in spite of these improvements, access to financing is still a problem for the periphery's business sector. Specifically, 22% of SMEs in periphery countries state that access to financing is their main problem compared with just 11% in the core. Restoring confidence in the European project will depend on the advances made in the institutional sphere and the bulk of the evidence available suggests this process will be slow. Until this is accomplished, the access of banks in the periphery to stable sources of funding at a reasonable price will not get completely back to normal. Measures to help this process become more manageable are therefore vital (see the Focus «Will the ECB venture into unknown waters?» for an analysis of the different measures that might be taken by the ECB). 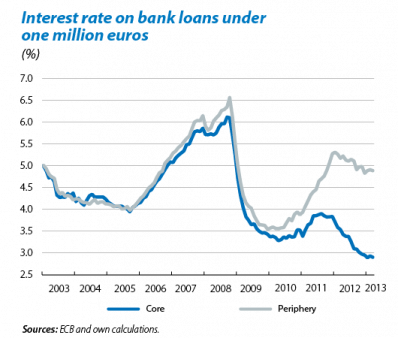 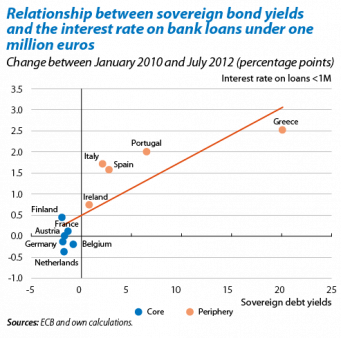