There has been a dramatic fall in the sovereign risk of the peripheral countries since the peak reached during the crisis. The rates of descent have varied greatly, however, especially over the past two years with the re-emergence of some local sources of risk.

The difference between the yield on a country’s 10-year bond and that on the German bund is normally used to analyse the trend in sovereign debt risk. This is known as the risk premium. But this variable also reflects other aspects apart from agents’ perception of sovereign risk, such as changes in investor risk aversion and how liquid the bond markets may be. Alternatively, statistical techniques can be used to estimate which part of the variation in sovereign yields is due to factors in common with other countries (such as monetary policy in the case of euro area countries) and which is due to each country’s own particular factors, such as perceived political risk.

This approach is adopted by the index presented in the first chart.1 As can be seen, the sovereign risk index rose dramatically at the height of the euro area’s debt crisis. It then fell considerably after the famous press conference given by the ECB President, M. Draghi in July 2012, when he promised to do whatever it takes to sustain the euro. More recently, the index has seen a modest rise, albeit from very low levels, pending the outcome of the French elections.

To gauge the perceived sovereign risk of Spanish public debt it is also useful to compare the 10-year interest rate observed in the market with the interest rate forecast by the model that takes both common and idiosyncratic factors into account. As can be seen in the last chart, the actual yield is lower than the yield suggested by the estimated trend in common and idiosyncratic factors. This is not the case in other peripheral countries and could point to an improvement in the economy’s outlook and, in short, in the perceived risk of Spain’s sovereign debt. 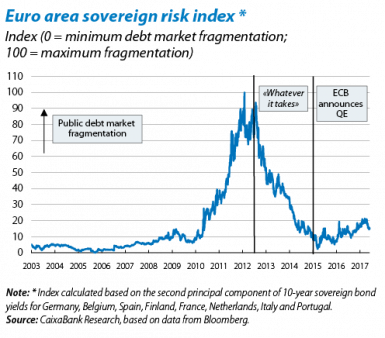 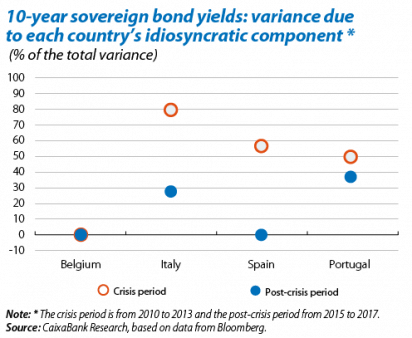 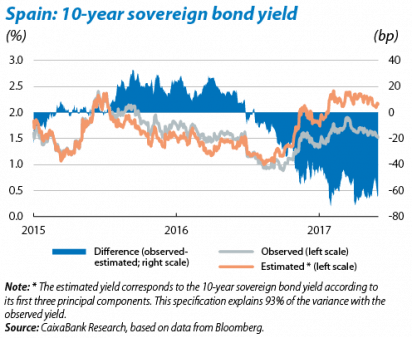