One of the big questions of the moment is whether the current rise in prices will spread to wages. To answer it, we analyse current wage dynamics in the euro area and what path they might follow in the future. Wage dynamics are a very important variable for the ECB’s monetary policy. Indeed, the ECB’s mandate is to ensure price stability, and wages are a key determinant of inflation: in the medium term, wages affect the evolution of prices, both on the supply side (because rising wages increase the cost of goods and services) and on the demand side (as higher wages increase the demand for goods and services, and hence their price).

In the current context of high inflation due to rising energy prices, one of the big questions is whether the increase in prices will spread to wages. Unsustainable wage increases could feed back into inflation, which would be an additional source of concern for the ECB. A priori, second-round effects (inflation spreading to wage rises) are less likely in a context of inflation triggered by an energy shock in a globalised world like ours, as it squeezes business margins and companies have less capacity to increase prices and wages. Thus, we must pay attention to current wage dynamics in the euro area and consider what path they might follow in the future.

In the euro area, observing the evolution of wages is a somewhat more complicated task than in other advanced economies. The main problem we face is the delay in the publication of the data. Whereas in the US, for example, information on hourly wages is published every month on the first Friday of the following month; in the euro area, Eurostat’s quarterly labour cost indicator is published two and a half months after each quarter end. Thus, as of the date of this article’s publication, the latest data available in this series is that of Q4 2021.1

With this in mind, we can see in the first chart that the year-on-year growth in wages in Q4 2021 was 1.6%. This is a somewhat contained level; as a benchmark we can refer to the criteria established by Phillip Lane, the ECB’s chief economist, according to which a 3.0% wage increase would be consistent with medium-term inflation of 2.0%, precisely the ECB’s target.2 This lower buoyancy in wages compared to in the US (+5.6% year-on-year in March) is due, among other factors, to the job-preservation mechanisms implemented during the pandemic in the euro area (such as Spain’s ERTE furlough scheme). While these measures were highly effective in maintaining employment and avoiding drastic reductions in household incomes, when the economy finally reopened they did not allow workers to enjoy the wage rises that usually accompany job changes.3 For now, wages are still contained, but how will they evolve in the future? To answer this question, we analyse their relationship with the main determining factors: the unemployment rate, inflation expectations and past inflation.4

The rise in inflation observed since the end of 2021 and the increase in medium-term inflation expectations could contribute to more dynamic wages in the coming quarters (it should be noted that price increases do not generally spread to wages immediately, as there is an adjustment period).

The inflation outlook also poses an upside risk for wages: we expect inflation to remain high in the euro area during the middle of the year, although it should gradually moderate (even in a scenario in which energy prices remain at their current levels, eventually the year-on-year inflation rate would fall due to base effects). Based on the historical relationship between inflation and wages, if average inflation in 2021 and 2022 were to be around 4.7% (the average rate consistent with our current inflation forecasts), this would imply a wage growth 0.54 pps higher in 2023, in year-on-year terms, than we would see if inflation were to average 2% between 2021 and 2022. Also, if we assume that this higher inflation would cause medium-term inflation expectations to move above target, increasing them by, say, 1.5 pps to 3.5%, then wage growth in 2023 would be 0.42 pps higher than in a scenario in which expectations remain anchored at 2%. Combining these two effects, wage increases in 2023 would be approximately 1 pp higher than they would be in a situation with controlled inflation and expectations anchored at 2%. 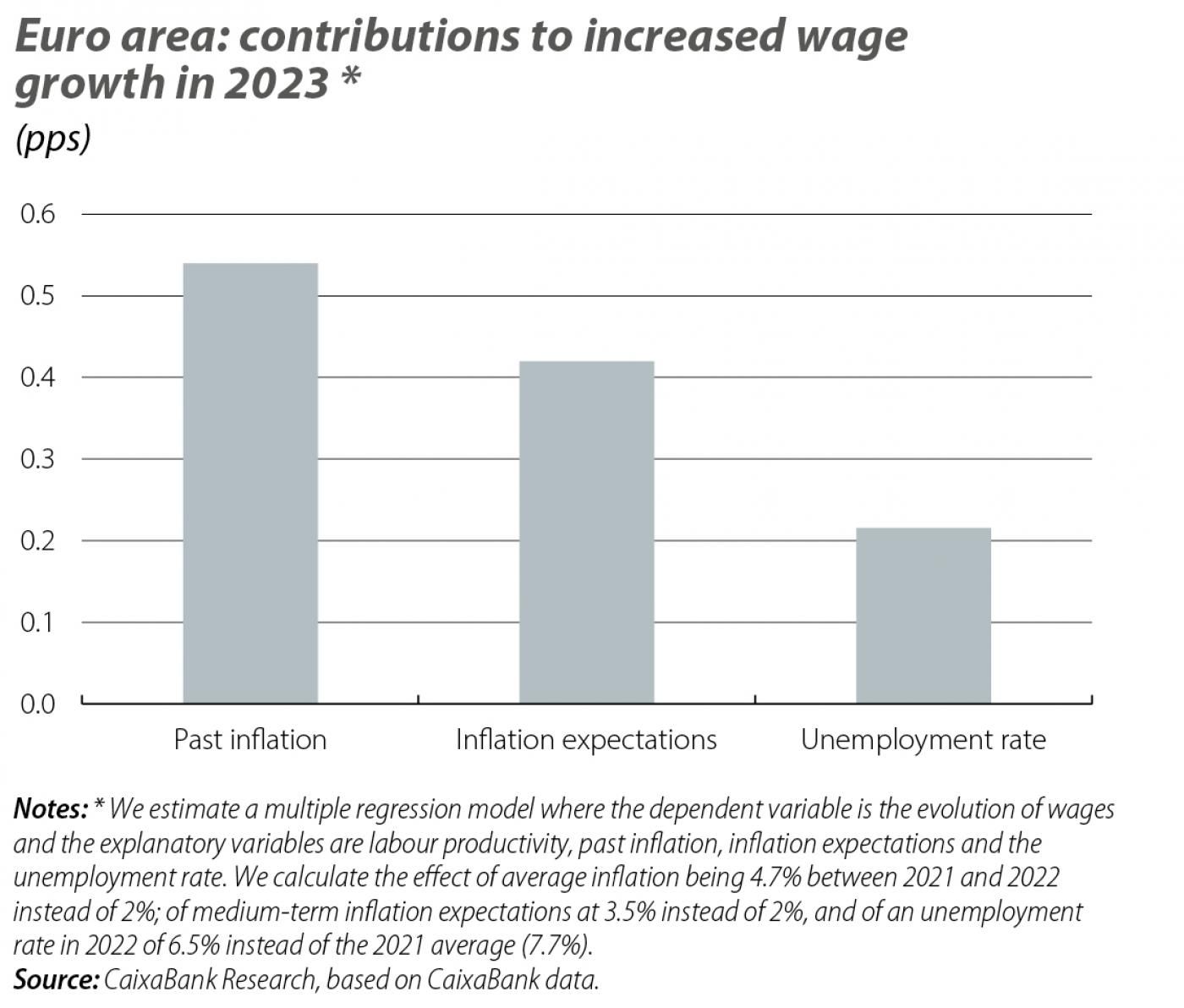 On the other hand, the unemployment rate could exert greater pressure on wages due to it being at historically low levels (6.8% in February 2022, or 2.6 pps below its historical average) thanks to the rapid recovery in the labour market.5 However, what happens in the euro area’s labour market in 2022 is uncertain and will largely depend on the duration of the war in Ukraine and the economic impact of the sanctions, especially for those economies that are more dependent on Russian gas (such as Germany and, to a lesser extent, Italy).

In summary, according to the available data, at the end of 2021 wage dynamics were not an additional concern for the ECB, being clearly below 3%. Indeed, the contained wage dynamics of the last year are one of the reasons why the ECB has not yet raised rates, despite the high inflation; in fact, the medium-term inflation projections have so far been below 2.0%. However, the scenario is changing. On one hand, the ECB has made a recent shift in its communications, highlighting that inflation expectations are now above 2%, so it is likely to raise rates this year in order to prevent these expectations from remaining above the target. On the other hand, the wage increases we are likely to see (taking into account the high inflation and a historically low unemployment rate) should lead to medium-term inflation of around 2%, allowing the ECB to gradually raise interest rates. Thus, we are likely to see net asset purchases brought to an end in Q3 and the first interest rate hike before the end of 2022. This and subsequent rate hikes should prevent the current high inflation rates from becoming chronic, both through inflation expectations and unsustainable wage dynamics.