Immigration policies: not only entering but also integrating

Immigration is a reality in almost all western countries and, given the context of an ageing population growing at an uneven rate among countries, it is a phenomenon that will gain in importance over the coming years. Managing immigration poses a significant challenge for the host countries, however. If immigration is here to stay, it is of the utmost importance for governments to develop an immigration policy that successfully manages migration flows and helps recent immigrants to integrate effectively.

To ensure migration flows are orderly and effective, policies need to focus on two areas. Firstly, illegal immigration must be controlled successfully at the border, ensuring that immigrants living in a country have all their necessary documentation in order. Secondly, regular migration must be encouraged and it should be in line with the country’s needs and objectives. In this respect one of the crucial aspects for granting a visa is to take into account the main objective for migration, such as getting a job, joining the family or fleeing a war, to name the main reasons.

Economic immigration lies at the heart of immigration policies in the first place because of its potential impact on the host country’s labour market.1 In general permits can be granted focusing on either the demand for or the supply of labour. Via demand, obtaining a work permit (be it temporary or permanent) tends to depend on the specific needs of the job market and whether there is a proven shortage of labour for a specific occupation. The problem lies in duly verifying this shortage. Several countries have mechanisms to help them identify which occupations are finding it difficult to meet their demand for labour. For example, for certain jobs in the US an offer must be advertised in the local market before the company can hire people externally. Via supply, obtaining a permit usually depends on the characteristics of the immigrant. An illustrative case are the points–based migration systems used by Canada, Australia and New Zealand in which visas are granted when the applicant achieves a minimum score in a questionnaire that takes into account aspects such as knowledge of the country’s language and educational attainment. You can check yourself if you would be eligible for a permanent visa in Australia in the table below (if you don’t reach at least 60 points, you are not even allowed to apply). Both types of policy, supply and demand-based, can achieve the same result; it is merely a question of how each system is designed and, in practice, most countries use a combination of the two. What is important is whether the system provides the legal mechanisms so that immigrants can be hired with all levels of training and experience, taking into account both the present and the long-term needs of the labour market as well as the impact of immigration on the country.

Another large proportion of migratory flows comes from family migration and free movement. These categories are made up, respectively, from the immigration of direct relatives of a citizen residing in a country, be they nationals or foreigners, and by immigrants from a country with an agreement allowing the free movement of people, such as the EU and the agreement between Australia and New Zealand. For both kinds of flows, a permit depends on these immigrants not becoming an economic burden for the host country, so there is usually a minimum income requirement or their rights to certain social benefits is restricted and even, for a relative of an immigrant, the requirement of a minimum level of knowledge of the country’s language to ensure they can integrate.

The last relatively significant category is migration due to humanitarian reasons,2 made up of asylum seekers seeking protection in the host country. In this case the criterion for granting a permit is governed exclusively by the need to protect the immigrant and not by economic criteria or the aim of maximising integration in the country. The current system to apply for asylum in developed countries, which protects rights but is complex, has not been adapted to handle large and unexpected flows of refugees such as those observed in 2015 and 2016. Broadly speaking, the main areas which can be improved are the capacity to handle applications for asylum and temporary refuge as well as coordination between host countries. All these actions are of the utmost importance but are also highly complex.

In addition to managing migratory flows, an effective immigration policy must also have efficient integration measures, an important issue both for the immigrants and also for the economy and social cohesion of the host country. Entrance policies attempt to maximise the integration of immigrants but this takes time to materialise and is not always successful. A host of factors can hinder the process but the most common are usually a limited knowledge of the language, inadequate or unrecognised qualifications and employment discrimination.

One of the starting points to improve the integration of immigrants is therefore to ensure their skills and qualifications are accredited in their country of origin. The case of a Russian nuclear physicist who could only work as a taxi driver in London may seem extreme but the truth is that, in the EU, around 33% of immigrants with university qualifications are working in jobs that require a lower level of education.3 Another vital step for integration involves being able to communicate correctly in the host country’s language. Immigrants also tend to have a limited knowledge of how the labour market works and a small network of contacts, making it difficult for them to integrate. And it is not only immigrants who face such limitations; their children also tend to encounter problems at school and in the world of work.

Integration policies must therefore take many different aspects into account, which could make them very complex. However, there is one integration mechanism that has been shown to be highly effective; getting a job. This helps, for example, to perfect language skills and to develop a network of contacts. Partly because of this, immigrants who arrive with a work permit integrate more quickly than those arriving with a visa granted for family or humanitarian reasons. Most integration policies must therefore focus on helping immigrants to find a job. In this respect, one of the main challenges faced by immigrants is discrimination due to their country of origin when looking for employment. Several studies carried out in developed countries show that, when identical CVs are sent to companies that only differ in terms of the applicant’s name, those with a foreign name have less chance of being called for an interview.4 On the other hand, another of the key aspects in measures to encourage employment are active employment policies, which must pay particular attention to certain groups with specific problems, such as immigrants.

The last step for the full integration of an immigrant in the host country is to take on that country’s nationality (known as naturalization). Most countries only grant this after many years of residence and after passing a test to ensure a minimum knowledge of the language and country (you can try to take Spain's citizenship test, required to obtain Spanish nationality!).5 Obtaining nationality may be the biggest incentive for an immigrant to integrate into their host society and establishing demanding requirements that link nationality with integration tends to have very positive results.

In summary, migratory policies make up, as we have seen, a whole series of measures that go beyond the protection of a country’s borders. Appropriately handling migration flows is the first step but successful integration in the host country must be the ultimate goal.

1. Economic immigration accounted for 14% of permanent migratory flows (of more than one year's residence) in OECD countries in 2014. See the article «The phenomenon of immigration in advanced countries: from perception to reality» in this Dossier for more details.

2. Around 9% of permanent migratory flows in OECD countries corresponded to immigrants due to humanitarian reasons.

3. Compared with about 25% among the native population. OECD (2015), «Indicators of Immigrant Integration». 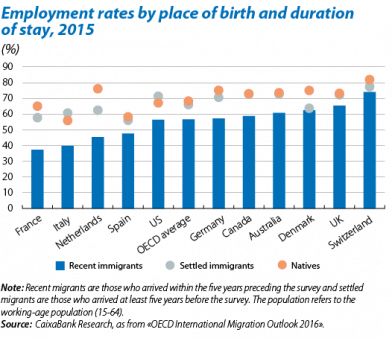