As we have seen in the previous articles, a population with more grey hairs reduces economic growth. The impact of ageing is not inevitable, and far from it, but in order to counteract it we must first identify the channels through which it affects the economy, as well as their relative importance.

As we explained at the beginning, ageing reduces economic growth because it affects the size and productivity of the labour force. Until now, many studies on ageing and economic growth focused on the reduction of the workforce, but very few analysed productivity. One study that did, however, was that conducted by Maestas et al. (2016) for the US, breaking down economic growth into changes in the proportion of the population that works (i.e. the number of workers per capita) and changes in the productivity of the labour force (GDP per worker).1 We will extrapolate this approach to the case of Spain and, using this breakdown, we will then estimate what impact ageing has on each of these factors using sophisticated statistical techniques similar to those used in the previous article.

Ageing reduces economic growth both through a reduction in the labour force and, in equal or greater measure, by causing lower productivity

Since we have seen that the ageing of the population has a significant impact on productivity growth, we consider it appropriate to analyse in which areas this is reflected. Thus, we break productivity growth down into three components: wages (the income per hour worked), the number of hours worked by each worker and the value added for each dollar of income.

According to our estimates, the lower productivity growth caused by the ageing of the population translates, above all, into lower wage growth (two-thirds of the impact), as reflected in the table. In other words, a 1% increase in the proportion of the population aged 60 or over translates into a 0.13% lower annual wage growth (as a benchmark, the average annual wage growth in the past two decades has been 2.3%).2 Also, one third of the impact of ageing on productivity occurs in the intensive margin of the supply of labour, i.e. a reduction in the number of hours per worker. This is a much smaller impact than that seen in salary adjustments.

The impact of ageing on economic growth varies by sector

Ageing does not necessarily have to have a negative impact on labour productivity. Whether or not it does depends, among other factors, on the sectoral configuration of the economy, as well as on the response of workers, firms and the general government to counteract it. In fact, Acemoglu and Restrepo (2017)3 claim that greater ageing could be associated with higher productivity if it ends up driving investment in the automation of production processes. In the same vein, Jimeno (2019)4 discusses how ageing can incentivise the implementation of technological changes, although he also points out that these changes are unlikely to completely counteract the lower growth in GDP per capita.

As we have suggested, part of the discrepancies found in the economic literature on the impact of ageing on economic growth are due to the differing sectoral configurations of each economy and each sector’s potential for automation. To explore this point, we grouped the autonomous community regions into three groups based on their most important economic sector (agriculture, industry or services) from the point of view of employment in relative terms (in comparison with the rest of the autonomous community regions),5 in order to calculate the impact of ageing on each of these groups separately. The results show that in regions where industry plays a greater role in the economy, the impact of ageing on economic growth is positive, thanks to gains in labour productivity that could be explained by the increased automation of industrial processes. In contrast, in regions dominated by services (less automated, due to the very nature of the sector), ageing significantly reduces growth in GDP per capita. This reduction is explained by the decline in both the labour force and productivity in equal parts. These differences in the results according to the predominant economic sector highlight the importance of taking into account economies’ sectoral configurations when measuring the impact of ageing on economic growth, and they may help us to understand why some studies have identified a positive impact and others, a negative impact.

2. Based on the assumption that wages are approximately in line with the marginal productivity of labour, ageing should not affect GDP per euro of income, as we have identified in our analysis.

3. See D. Acemoglu and P. Restrepo (2017). «Secular stagnation? The effect of aging on economic growth in the age of automation». American Economic Review.

5. Grouping of autonomous community regions according to the relative importance of each sector (in comparison with the rest of the autonomous community regions) in terms of employment: agriculture (Andalusia, Extremadura and Murcia), industry (Aragon, Catalonia, La Rioja, Navarre, the Basque Country and Valencia) and services (the Balearic Islands, the Canary Islands, Cantabria, Castilla-La Mancha, Castile and León, Galicia and Madrid). 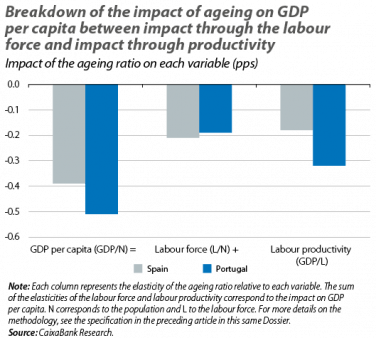 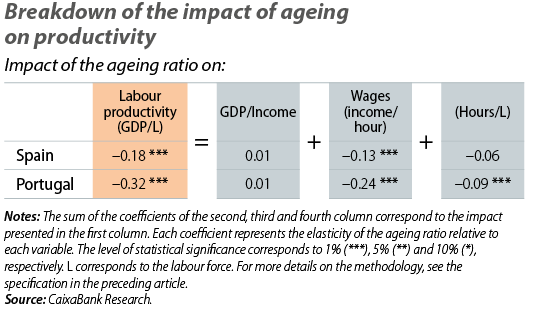 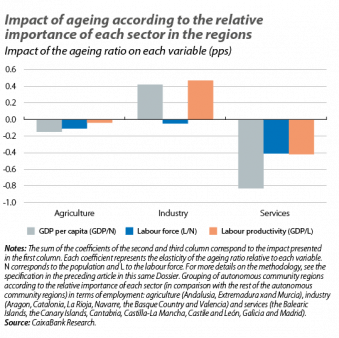