The migratory phenomenon in Spain: from immigration to emigration?

A large number of people immigrated to Spain in search of opportunities during the first decade of the new millennium. In fact, between 2004 and 2008 Spain received a cumulative flow of 3.7 million people and, in 2007, broke the record for the number of foreigners entering the country, over 900,000 in total, becoming the second largest receiver of immigrants in absolute terms among the OECD countries after the United States.1 However, the crisis not only put a stop to immigration2 but also stimulated emigration; to such an extent that net migration remained in the red between 2012 and 2014. In this article we analyse the evidence regarding the most recent migration phenomena observed in Spain, with particular attention on emigration over the last few years and the departure of more highly educated young people.

Immigration affects the host country in many different ways. In this Dossier, the article «The economic impact of immigration» analyses the main channels through which this phenomenon affects the economy. For Spain, where the volume of immigrants born outside the country represents 13.2% of the population, a figure similar to countries such as Germany and the United Kingdom,3 different studies have analysed the effects of the recent wave of immigration on the country. These analyses coincide in noting that, insofar as the labour market is concerned, the flow of immigration had zero or minimal effect on the total levels employment and wages received by the Spanish although it did affect the specialisation and distribution of jobs among native workers, encouraging them to carry out jobs involving fewer manual tasks.4 The arrival of immigrants also had a positive effect on the participation rate for skilled native female workers resulting from the increased availability of services provided by immigrants,5 as well as helping to postpone the problems caused by its ageing population. The impact of the larger supply of labour on economic growth was also appreciable: according to government estimates, immigration lies behind more than 50% of the growth in Spanish GDP between 2000 and 2005.6 However, at an aggregate level immigration had a negative effect on productivity and reduced the amount of capital per worker as immigrant workers were employed in typically labour-intensive sectors such as construction. Along the same lines, it is estimated that immigration contributed by one third to the housing boom of 1998-2008, in terms of prices and also new construction.7

The flow of immigration and emigration changed suddenly when the Spanish economy entered the recession in 2008. It has been calculated that, every year since 2009, around 400,000 people have left Spain while, in the period 2002-2005, this figure remained at 50,000 on average. Spain has seen several marked waves of emigration in its past (such as the emigration to America in the 19th century and early 20th, movements due to the Civil War and emigration to developed Europe in the 1960s and 70s), so this phenomenon is not new. Although these figures have caused some alarm due to fears that the most highly qualified young people are leaving the country, the so-called «brain drain», a slightly more sophisticated analysis reveals that most of those who have emigrated are foreigners and mainly the immigrants who had arrived with the migratory wave of 1998-2007.

In particular, out of the 352,003 people who emigrated from Spain in 2015, only 64,136 had been born in the country. The extent of the emigration of young Spaniards born in Spain is therefore smaller than we might suppose on first looking at the statistics (they account for just 18% of all emigrants). However, it should be noted that this number has more than doubled since 2009 with France, the United Kingdom, Germany and Argentina being the main countries chosen by such emigrants.8

As in the case of immigration, emigration also has notable consequences for the country of origin. Continued flows of emigration could limit the growth potential of the Spanish economy and aggravate the problems entailed by its ageing population. In particular, the emigration of young skilled workers reduces the size of the skilled labour force, which could erode growth in productivity and, ultimately, economic activity.9 In the case of Spain, the emigration rate among skilled workers in 2011 was among the lowest in the OECD, specifically 2.8%, in contrast with advanced economies such as France, Sweden, the Netherlands and United Kingdom with rates of 6%, 7%, 8% and 11%, respectively.10 Moreover, a recent study by the Bank of Spain states that, as from 2011, the share of lower qualified people has risen among the population of emigrants born in Spain.11 These findings suggest that emigration is not limiting growth in production capacity, at least at present. Nevertheless it is a phenomenon that needs to be monitored closely as the emigration of young Spaniards will probably continue for some time yet, as is the case in most of the developed economies.

Lastly, it should also be noted that many people who have emigrated in the last few years will probably end up returning. In a recent analysis, the OECD estimated that between 20% and 50% of the immigrants received by a country leave within the first five years of their arrival, either to return home or to go on to another country.12 Spain, which is already posting notable rates of growth in economic activity and employment, should be able to offer those who have emigrated enough opportunities for professional and personal development for them to want to return.

8. It should be noted that the statistics may be underestimating the number of people who have left the country as they are based on the registration figures of residents abroad and there may be a significant number of emigrants who have not registered as resident in another country. 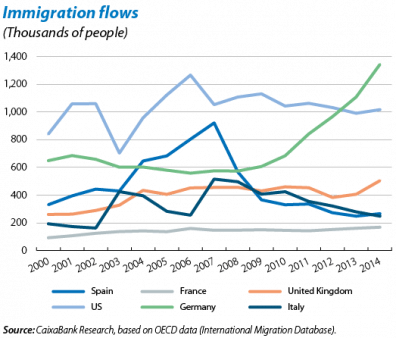 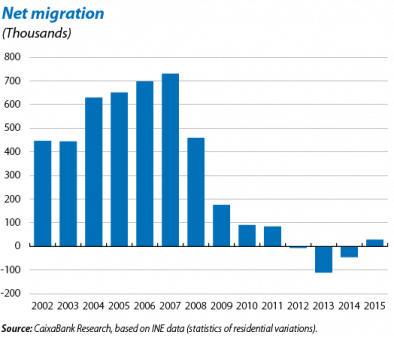 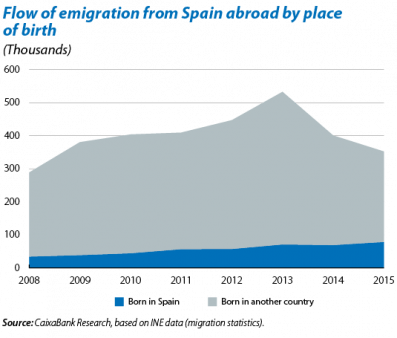