• China is responding with economic policy space to deal with the coronavirus. On the one hand, measures will be taken in the first half of the year to support the sectors experiencing the greatest difficulties. On the other hand, a significant fiscal stimulus package is expected to provide investment in the second half of the year.

• The set of measures will be beneficial, as they will facilitate a full recovery of China's economy, although they will also increase the deficit in a country with an already high level of corporate debt (150% of GDP).

A dreadful start to the year: what has been the economic policy response?

The outlook in China is gradually clearing up: following the uncompromising containment measures implemented by the Chinese government in late January, the number of new COVID-19 coronavirus infections in the Asian giant has fallen significantly and, by the end of February, 80% of companies had already restarted operations – although it will be some time before they are operating at full capacity. This improvement suggests that, while the economic impact of the coronavirus in China will be highly significant in the short term (after the dire economic activity data for January and February, nobody doubts that GDP will contract in year-on-year terms in Q1), little by little the economy should return to normal (although in Q2 the weakness of foreign demand due to the global spread of the coronavirus will also have a negative impact). Thus, looking ahead to the second half of the year the economy should bounce back, provided there are no resurgences of the epidemic and the global economy recovers.

To date, the Chinese fiscal and monetary authorities have reacted with a very measured and cautious response at the economic level to tackle the effects of the coronavirus. This is because the authorities have considered that this is largely a supply-side crisis that has paralysed the country’s productive capacity, although if decisive action is not taken it could also have a significant impact on demand. Therefore, the authorities have focused on mitigating the disruptive effects that this crisis could have in the hardest hit sectors – otherwise, citizens could lose their jobs, with all the effects that entails – rather than launching a large-scale stimulus package that would be unlikely to prevent a significant drop in economic activity in the short term.

In particular, faced with this delicate situation, the government and the central bank have opted for a somewhat surgical response, with injections of liquidity and fiscal aid for the companies most at risk, with the aim of blocking the possible channels of financial contagion. On the one hand, the central bank has cut the interest rate at which it provides short-term financing to banks by 10 bps, it has injected liquidity into the banking system by reducing the reserves required to be held by banks that lend to small and medium-sized enterprises, and it has declared a six-month moratorium for these companies’ debt and interest payments. On the other hand, the government has reduced the social security contributions paid by companies, cut VAT and electricity rates and granted subsidies to firms in order to maintain employment.

What fiscal and monetary policy will we see going forward?

All the indicators suggest that China’s economic policy makers will adopt a gradual and two-pronged approach in the remainder of the year. On the one hand, they will continue to implement measures in the first half of the year designed to help the sectors in difficulty. At the monetary level, for instance, it is expected that the financial conditions will be relaxed further in order to encourage lending and the flow of liquidity. On the other hand, once the economy is put back into gear, there is expected to be a significant fiscal stimulus package aimed at investment in order to help the Chinese economy gain momentum in the second half of the year and ensure a stronger rebound. As was the case in 2016, most of this stimulus will come in the form of measures aimed at incentivising local governments to borrow and to finance infrastructure projects through debt issues that are not included in the budget.

Most analysts calculate that, as a result of the stimulus, the augmented deficit (i.e. including other expenses that do not appear in the budget, such as those articulated through issues of special debt by local governments to finance infrastructure projects, which must also be taken into account since this is how such administrations can increase their spending while circumventing their budgetary restrictions) will increase this year by 3.0 pps (bringing it to around –16.0% of GDP). This is a similar increase to that produced by the stimulus of 2016, but notably lower than that of the stimulus of 2009 aimed at cushioning the impact of the financial crisis (see second chart). In the end, the fiscal policy space is much lower today, given the significant rise in the level of local government debt, which represents 80% of all public spending.

The set of measures set out above will be beneficial on the whole, since they will facilitate a full recovery of the Chinese economy following the blow it will suffer in the first half of the year due to COVID-19, if the pandemic is definitively controlled. However, unfortunately, all that glitters is not gold: the measures may also result in an increase in the levels of debt and a pause in the incipient deleveraging process in which the country was immersed in order to reduce its high corporate debt (150% of GDP). All in all, this may be a temporary and controlled slowdown in the path of debt reduction. Indeed, for the Chinese government, preserving financial stability and facilitating the deleveraging process are prime objectives, hence the prudent and gradual approach currently being taken in relation to the coronavirus crisis. Nevertheless, what it clear is that we cannot entirely rule out the possibility that, when the unprecedented (at least since the time of the Cultural Revolution) and sharp fall in GDP in Q1 is confirmed, the government might be tempted to implement a bigger than expected economic stimulus and focus its entire strategy on boosting growth at the expense of the containment of debt. 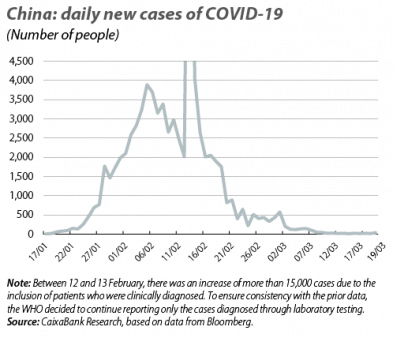 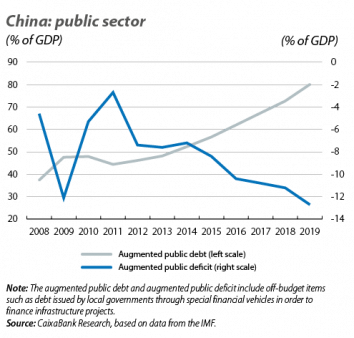 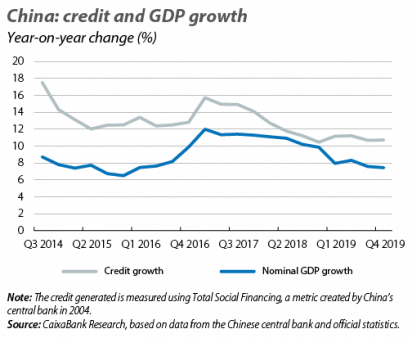