This month's dossier looks at one of the key issues for the long-term sustainability of public finances in developed countries: the design and management of pension systems, a cornerstone to the welfare state.

The need to reform public pension systems comes from both the expected demographic trends in advanced economies and also from design failings in pay-as-you-go (PAYG) systems.

With regard to demographic trends, unless highly significant changes occur in migratory flows or policies to boost the birth rate, the outlook is for a gradual but inexorable ageing of the population and all that this entails in terms of a deteriorating dependency ratio, i.e. the number of pensioners for every employed worker.

With regard to design, PAYG systems are efficient mechanisms to collectively insure against risks such as longevity. But their partially redistributive nature places them at the heart of political debate and, unless there are very strict legal safeguards, the tendency is to set benefit levels with an implicit return that are higher than the real returns generated by the economy which is, ultimately, the profits resulting from the creation of jobs and from developments in work productivity.

Most of the reforms introduced in western countries over the last few years have attempted to guarantee the viability of public systems by incorporating more or less automatic mechanisms that adjust the system's benefits, both to demographic trends and also to the availability of resources actually generated by the economy. Reforms have also ideally attempted to modify people's behaviour, both in terms of the decision regarding how long they will work as well in relation to participation in the labour market. The reform that is being discussed in Spain falls within this context.

Reforms have gone further in some countries, attempting to promote private pension plans as a complement to public pensions. Private pensions are based on accumulation systems and therefore encourage saving, while the benefits depend on the returns achieved by the assets in which the resources saved have been invested. By definition, these are therefore systems that are not redistributive and where the benefits cannot exceed the funds actually generated. Obviously they also have their drawbacks, including administration costs and the risk assumed, given that their benefits depend on the volatility of the assets invested in.

Whatever the case, it is useful to note something that is often forgotten when discussing the dichotomy between public and private pensions. Beyond political connotations, their co-existence clearly makes sense. The public system is based on returns from an asset that is central to any economy, namely its labour force. Benefits will ultimately depend on growth in employment and real wages. On the other hand, private systems depend on returns from financial assets, basically bonds and shares. Past experience shows that the correlation between all these assets is very low and might even be negative. Common sense, and the basic rules of financial diversification, therefore suggest that it would be wise for developed economies to base their pension systems on a combination of both models, particularly when accumulation systems also help to diversify risk by accessing international financial assets. 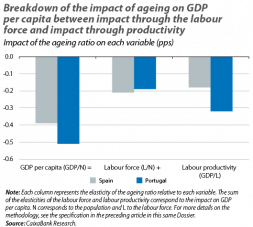