The Spanish government has already sent the Recovery, Transformation and Resilience Plan to the European Commission. The Commission now has two months to evaluate it and the European Council has an additional month to approve it. 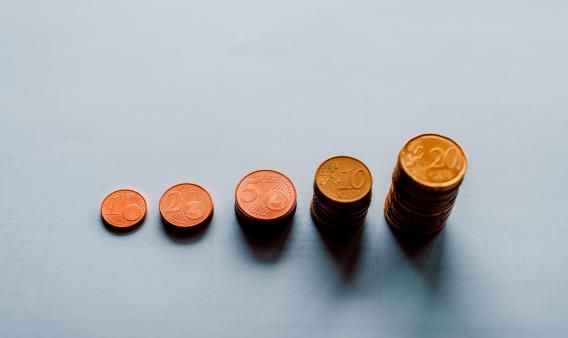 Spain expects to receive some 70 billion euros between 2021 and 2023 in non-refundable grants from the European Recovery and Resilience Facility.1 In addition to this amount, a further €70 billion could be received in the form of loans that Spain can apply for in order to complete the investments and finance public policy programmes. Once the European Council approves the Plan, Spain will receive an initial automatic payment of around €9 billion in pre-financing (the rest will be gradually released based on intermediate milestones being met and reforms being implemented).

The Recovery Plan outlines what the €70 billion in grants will go towards, as well as the key features of the reforms in 30 major areas (these, in turn, are to be deployed through 110 investment projects and 102 reforms). It combines investments that can be deployed quickly, with wide territorial and sectoral traction that can generate employment (refurbishment of housing, electric vehicles, solar panels, charging stations, investments in transport infrastructure, etc.), together with other more transformational investments (hydrogen, batteries, etc.). These investments will focus on key sectors, as shown in the first chart. 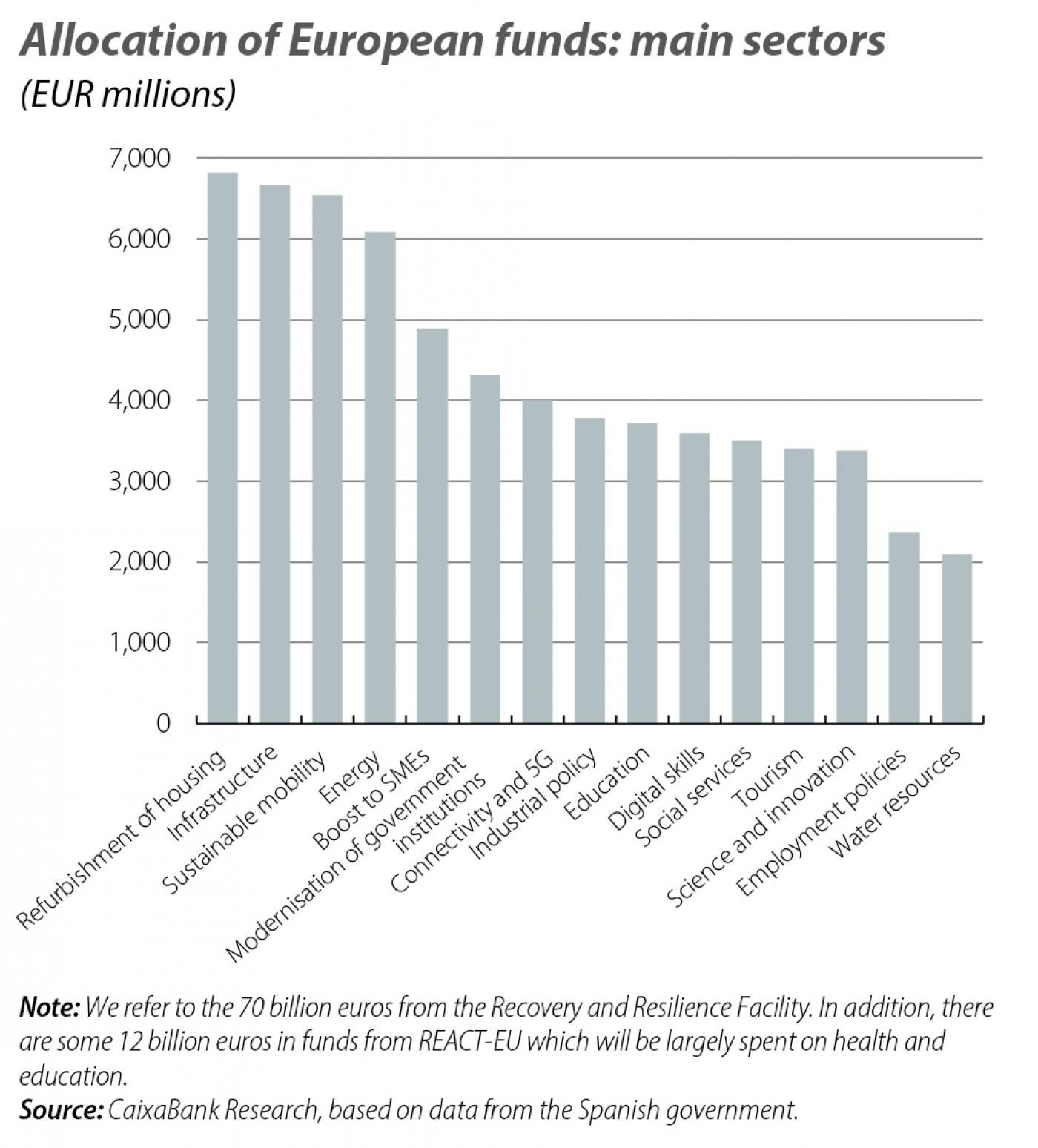 The government plans to spend €26.6 billion from the European funds in 2021 and the initial strategy is to focus this spending primarily on projects that can be implemented quickly (over 40% of the investments planned for this year are concentrated in energy, infrastructure, sustainable mobility and housing refurbishment).

The scale of the Plan represents the main challenge for achieving a high degree of efficiency in its execution. Its final impact will largely depend on the capacity to implement it and on whether the funds are allocated to projects that have a greater expansionary effect on the economy. To make the most of these funds, it will be essential for the criteria and procedures used to evaluate and select the projects to be well designed.

The governance of the Plan could have benefited from a greater involvement of external experts, both from academia and from institutions and companies, in its management and oversight. In its current form, the Plan’s main governance body will be an Inter-Ministerial Commission in which all ministers will participate. Each ministry will monitor and manage the implementation of the programmes that fall within their remit. In terms of coordination between government institutions, agreements between ministries and autonomous community regions will be used to channel funds for certain projects (e.g. housing) and there will be a Sector Conference, chaired by the minister of finance.

It should be noted that management of the Recovery Plan should be conceived as a structural reform in itself, as it represents a major opportunity to improve the efficiency of public policies. In this regard, given its magnitude and duration, rather than committing ex ante where to spend all the resources, it would be appropriate to include an initial learning phase in which the effectiveness of different projects or mechanisms could be tested for later evaluation, with the future disbursements of funds being focused in those areas with the greatest traction.

In order for this learning phase to succeed, it is essential to promote a culture and institutional structure centred around the evaluation of results in general government institutions. Mechanisms should be created to evaluate the various NGEU projects ex post, involving independent experts in order to redirect more resources to those projects that are working better.

It is encouraging to see that there is a willingness to undertake profound reforms in all key areas (labour market, pensions, education, modernisation of general government institutions, business creation and business size, etc.), although the contents are still somewhat generic.

In the labour sphere, emphasis is placed on the labour market’s great Achilles heel, its high degree of duality: on the one hand, people with jobs for life, and on the other, workers – mostly young – with highly precarious situations who go from one temporary contract to the next or who work part-time.2 The Plan calls for a simplification of the different types of employment contracts in order to make the use of permanent contracts more widespread and limit temporary contracts to circumstances which actually require a limited duration. The aim is to encourage the use of permanent-discontinuous contracts for recurring seasonal activities and penalise excessive use of very short-term contracts. This reform must be sufficiently ambitious so as to revise the types of contracts that exist and make permanent recruitment truly more attractive. The Plan also mentions the consolidation of an internal adjustment mechanism that would serve as an alternative to dismissals (a kind of structural furlough scheme)3. Such a mechanism could, for instance, allow the number of hours worked to be adjusted in the event of temporary declines in demand or to align with sectoral conversion processes. This would give companies more flexibility in reacting to adverse shocks and would also help to mitigate job destruction in difficult times. These reforms in the labour sphere are planned for 2021. 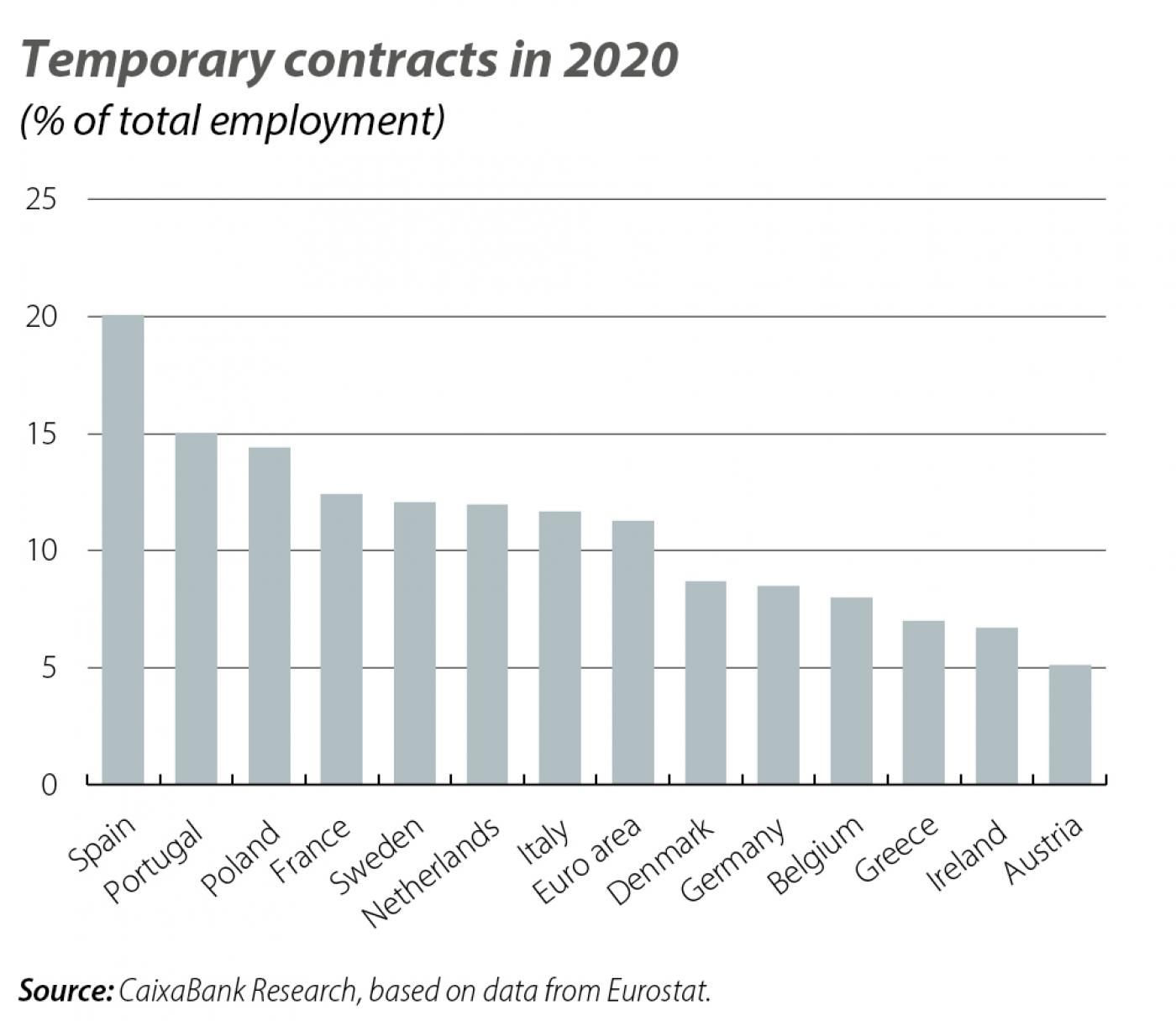 On pensions, it is essential to ensure the sustainability of the system through a reform which draws political consensus, is long-lasting and is transparent, thus allowing people to make proper long-term saving plans. The Plan contains several interesting proposals, such as i) greater incentives to increase the retirement age through economic improvements in the available pension and benefits for companies that continue to employ older workers (approval anticipated in 2021); ii) promoting workplace pension schemes (expected in the first half of 2022) with actions such as: workplace pension schemes that are publicly backed but managed by private companies, shifting tax incentives (yet to be specified) towards these sorts of schemes rather than individual schemes, transferring contribution rights from previous companies and extending the use of such schemes through sectoral agreements between companies and workers; and iii) revising the parameters of the pension system (anticipated in 2022 at the latest) to ensure the system’s sustainability and avoid excess pressure being put on young people, including variables such as life expectancy, the ratio of pensioners to workers and aggregate expenditure.

In addition, the maximum contribution base amount will be raised, a measure that will increase companies’ labour costs (social security contributions in Spain are above the European average). There are no figures for the expected increase, but to mitigate its impact it will be implemented very gradually over a 30-year period after it is approved before the end of 2022.

As we said, the NGEU programme is in itself a great opportunity to modernise the general government institutions, which is critical in order for them to have the agility and technical capabilities to implement the funds in the best possible way. In this respect, a large amount of funds (€4,315 million) will be used to modernise government institutions. In addition to bolstering their technology infrastructures, it would be desirable to prioritise investments in human capital and training (upskilling and reskilling) and to implement methods for evaluating public policies.

Finally, a committee of experts would be put in charge of designing a tax reform, the bulk of which would be undertaken in 2023, aimed at reducing the high structural deficit mainly through generating an increase in tax collections. In this regard, it is encouraging to note that the bulk of the measures are expected to be implemented once the recovery is consolidated. In particular, the main measures proposed include a review of tax benefits, an increase in green taxes, changes to corporate tax – in order for digital economy activities to be taxed and to achieve a minimum taxation rate of 15% – and, in the case of wealth tax, the introduction of a minimal taxation rate in all autonomous communities. It would be beneficial if this upcoming tax reform took into account the impact of each measure on economic activity in order to avoid a decline in the economy’s competitiveness. Furthermore, changes in revenues should be accompanied by a comprehensive analysis of the public accounts that focuses on shifting the priority for public spending towards the most productive uses and on improving its effectiveness.

In short, the Recovery Plan is an extensive document based on an accurate diagnosis of the main weaknesses that the Spanish economy must address, which coincide with those repeatedly highlighted by the European Commission. Over the coming months, these good intentions will be fleshed out with more content and it will be time to confirm that the measures are heading in the right direction. We must turn words into action.