A difficult end to the year amid new outbreaks 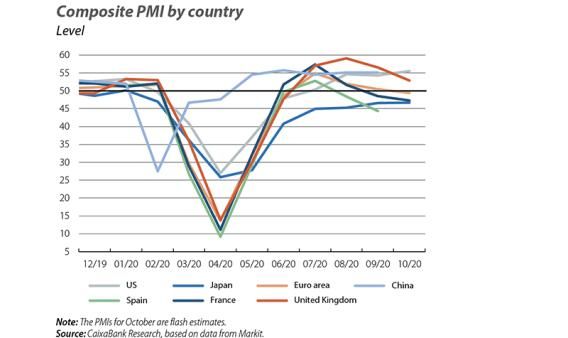 Loss of buoyancy in the closing stages of the year

Despite the rebound of GDP in Q3, the latest economic activity indicators show a loss of buoyancy towards the end of 2020, especially in European economies, where the composite Purchasing Managers’ Index (PMI) fell for the third consecutive month in October to 49.4 points (–1.0 compared to September). The deterioration was due to the fall in the services component (the manufacturing component improved), reflecting the fact that the new restrictions on socialising are already beginning to hit numerous service sub-sectors. In contrast, in the US the composite PMI increased to 55.5 points (54.3 in September), comfortably above the 50-point threshold. However, the US economy’s greater buoyancy could be compromised by the new coronavirus outbreaks that are already occurring, and it would come as no surprise if the second wave were to occur somewhat later on the American continent, as was the case with the first wave. In this context, CaixaBank Research’s outlook for global GDP forecasts that the decline in economic activity in 2020 will be followed by a relatively vigorous recovery in 2021 (in the order of 5%-6%). Again, however, what happens during the first few months of 2021 will be key and will depend on the fluctuations of the pandemic and the progress made in the field of healthcare to combat COVID-19. 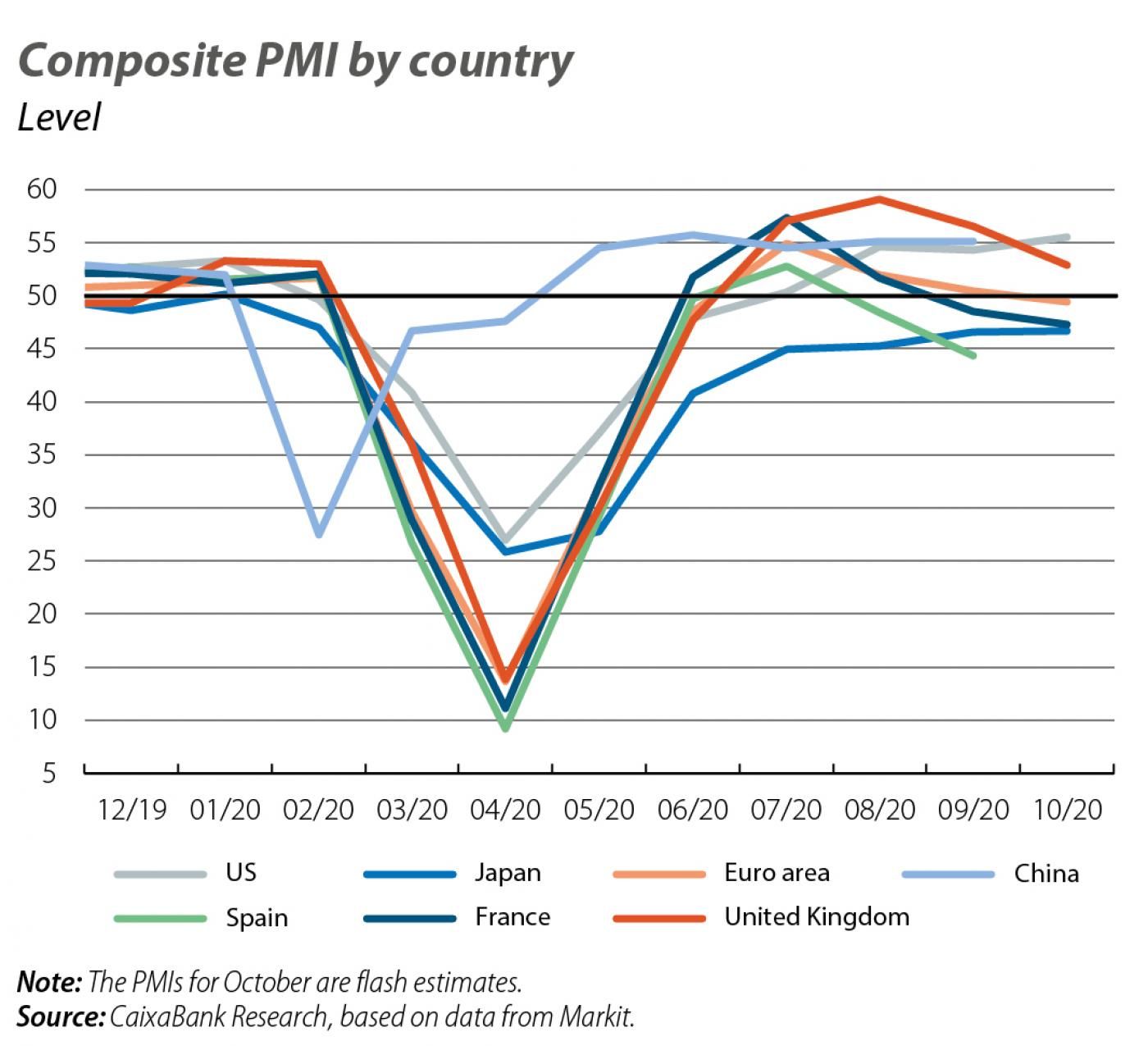 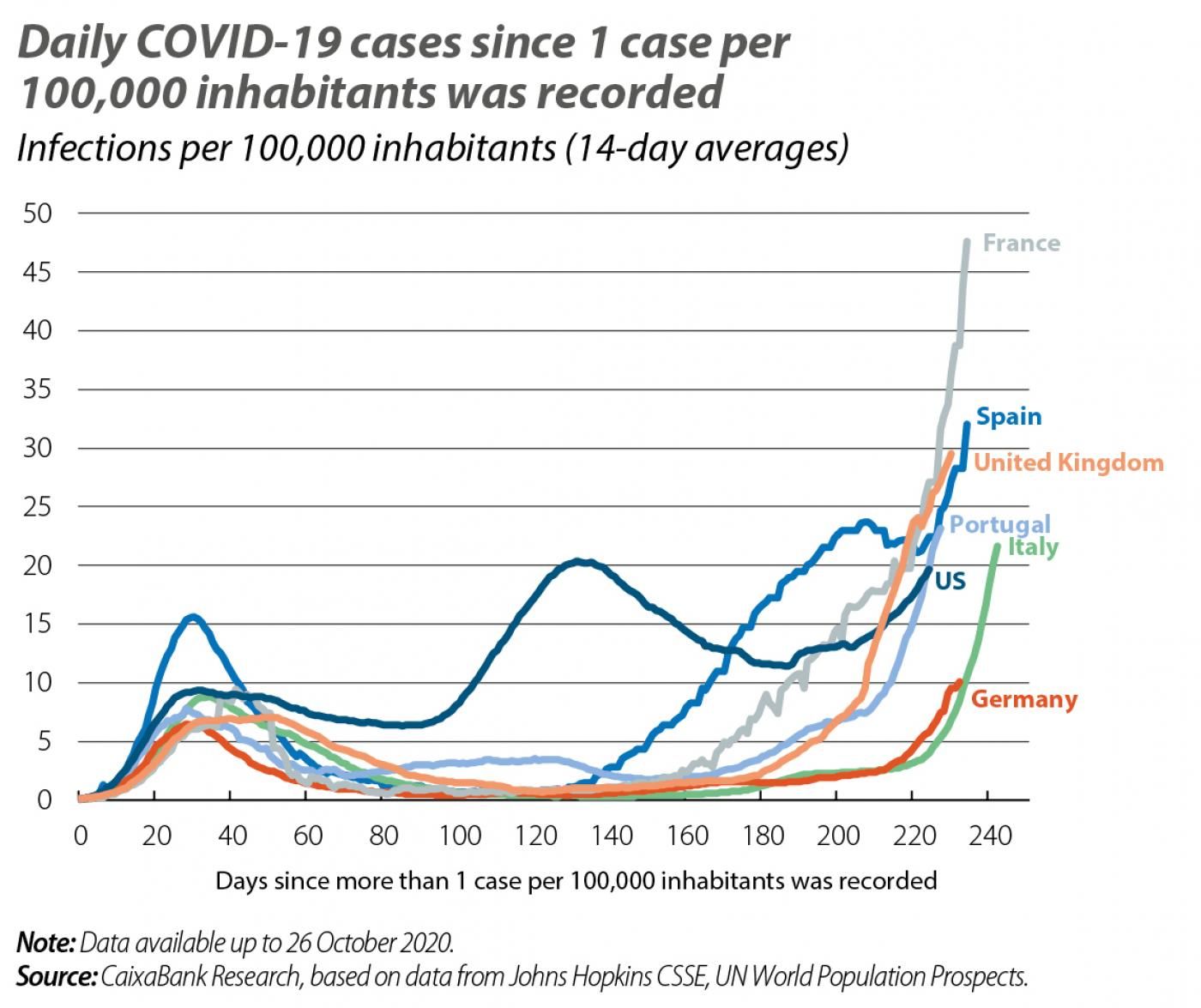 Considerable rebound in US economic activity in Q3 2020

US GDP increased by 7.4% quarter-on-quarter, a significant advance following the sharp fall registered in Q2 (–9.0% quarter-on-quarter) due to the impact of the COVID-19 pandemic. With this solid recovery, the year-on-year growth rate improved substantially, although it remained in contractionary territory (–2.9% year-on-year in Q3, compared to –9.0% in Q2). This rebound is both expected and logical, following the lifting of the strict lockdown in place in April and May. Nevertheless, the progress has been greater than that expected by many analysts (including CaixaBank Research). Indeed, the high degree of uncertainty that surrounded the revival of the economy in Q3 was apparent in the disparity between the estimates of the Atlanta Fed and the New York Fed just before the figure was published (9% non-annualised quarter-on-quarter and 3.5%, respectively). By components of demand, the improvement was widespread, although private consumption registered a particularly high increase (+8.9% quarter-on-quarter), supported by spending on durable goods. In contrast, public spending declined compared to Q2, although this trend should be reversed if the new stimulus measures being discussed by Congress are approved (see the Brief Note of 29-10-2020 for details). 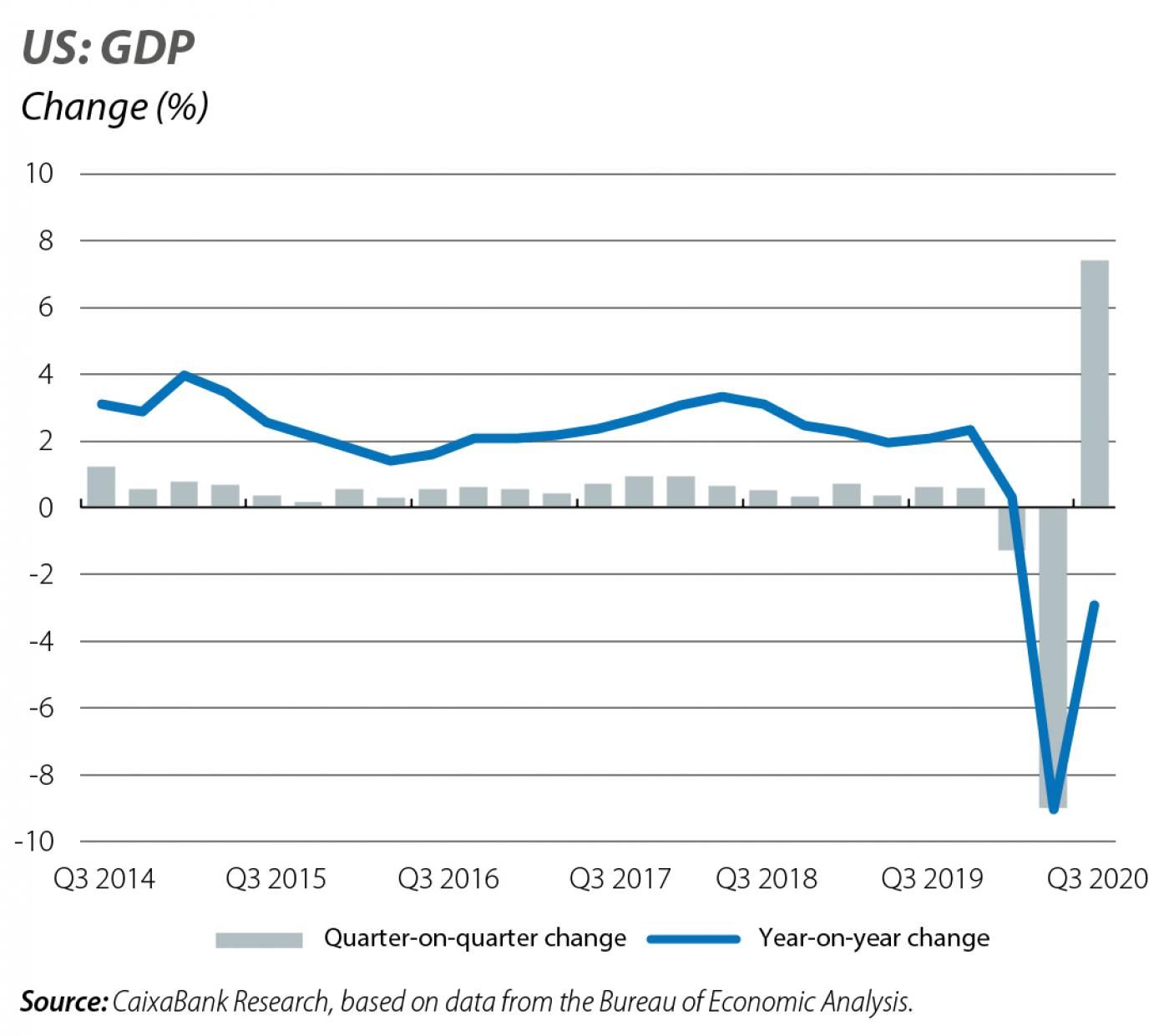 The US faces some very difficult months ahead

Although several of the latest economic activity indicators show that the US economy is resisting the current crisis better than most advanced economies (in addition to the good composite PMI figure, several indicators for the real estate sector and the labour market have registered gains), the rise in new infections could hold back the recovery. The counterpoint to the favourable data can be seen in the deteriorating expectations of the Conference Board’s consumer confidence index and the slight decline in the New York Fed’s weekly economic activity index. In fact, according to the latter’s forecasting model, the GDP projection for Q4 2020 has been gradually eroded in recent weeks. 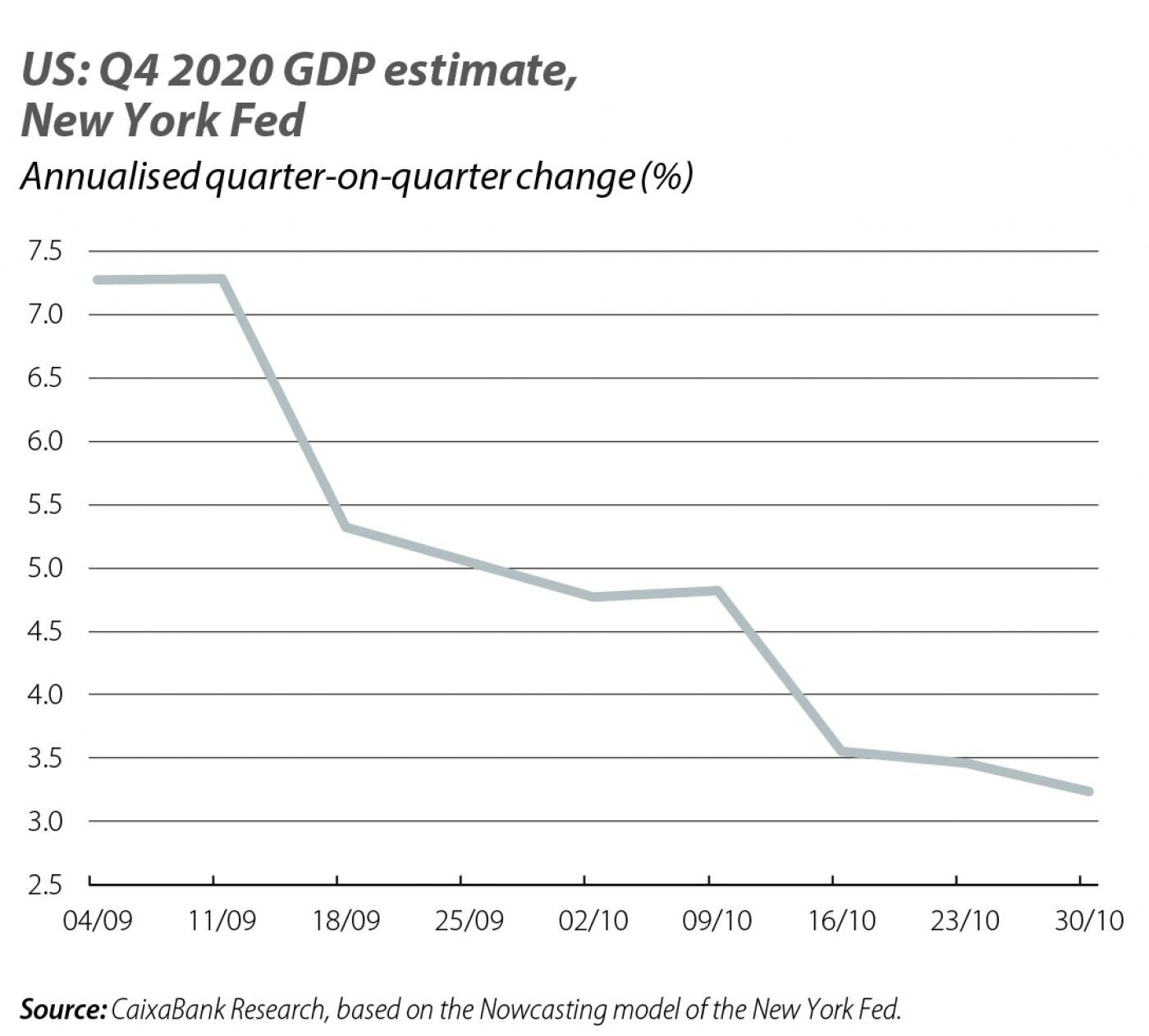 The Democratic victory raises the prospect of a new fiscal stimulus

At the close of this report, we learned of the US election result, where, finally, Democratic candidate Joe Biden defeated Republican President Trump in the presidential elections. In the case of Congress, it seems that it will maintain its division (although this is not yet definitive): the Democrats have a majority in the House of Representatives, and the Republicans in the Senate. In this political context and with COVID-19 threatening the US recovery, the government will continue to offer support to the economy. This support could end up being confirmed during the months of December and January for an amount of ~1.5 trillion dollars (7.5% of GDP), and it would come in addition to the 3 trillion dollars already approved (with some 2 trillion in direct-spending measures). Monetary policy is also providing a strong mainstay for the economy in the form of low interest rates, large-scale asset purchases and support programmes for firms (see the Financial Markets section for details).

In Europe, GDP also registered a significant rebound in Q3

Economic activity advanced by a solid 12.7% quarter-on-quarter in Q3 2020, following an 11.8% drop in Q2. However, as in the case of the US, although growth was considerable, economic activity remains well below pre-pandemic levels (the year-on-year change was –4.3%). By country, France registered the biggest rebound (+18.2% quarter-on-quarter), followed by Spain (+16.7%) and Italy (+16.1%), while in Germany the increase was also respectable but somewhat lower (+8.2%). This disparity in growth was to be expected, since the German economy suffered the smallest contraction in Q2, while the Spanish economy was by far the hardest hit (see the economic outlook article on the Spanish economy for details on the figure for Spain). Despite the rebound, the German economy was 4.2% below the level of Q3 2019, the French economy 4.3% below, the Italian economy 4.7% and the Spanish economy 8.7% (see the Brief Note of 30-10-2020 for details). 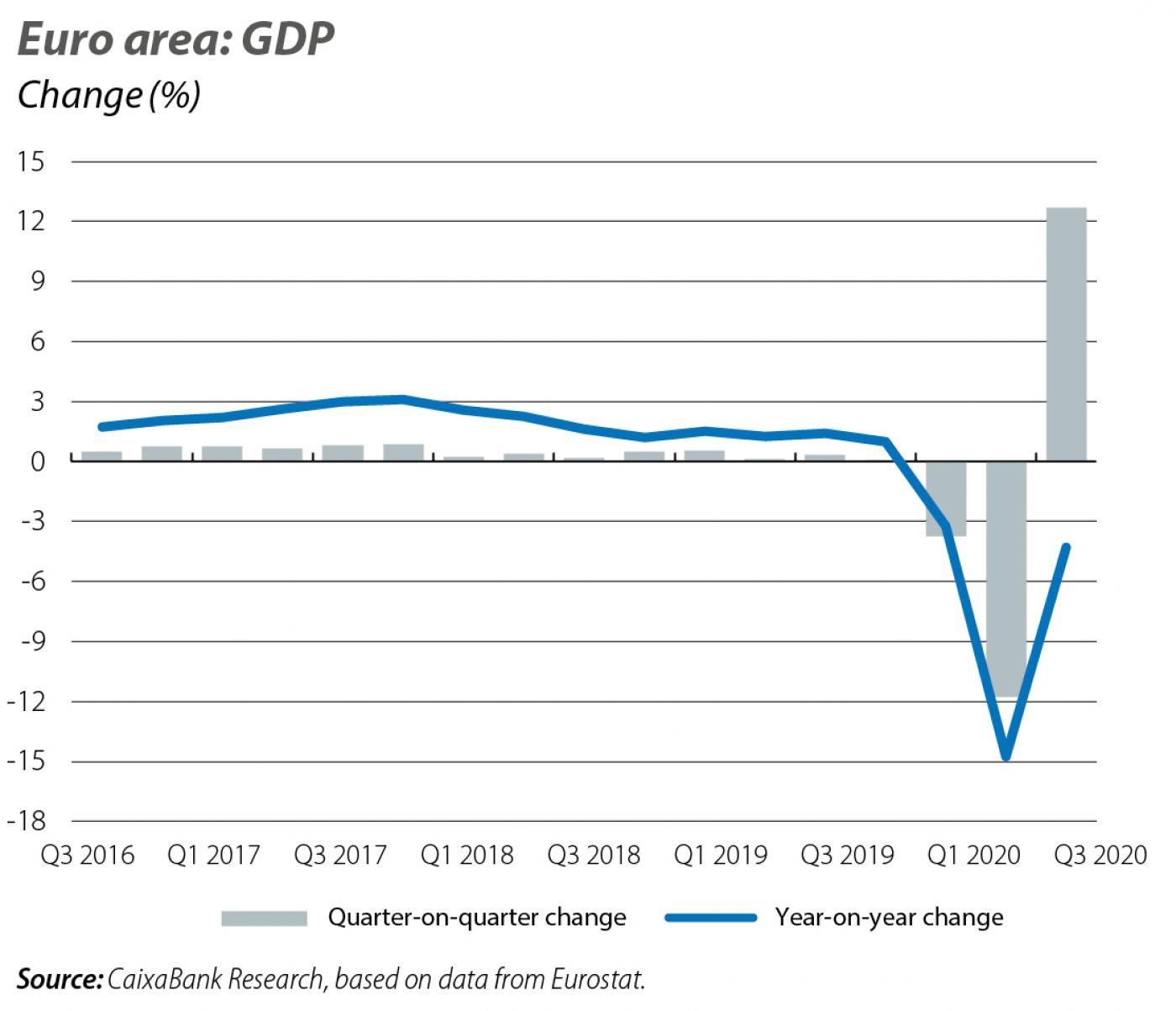 The latest economic indicators show that the improvement has been losing momentum since the end of the summer, as infection rates have increased. This is indicated by the new deterioration in the composite PMIs in October, mentioned at the beginning. In the same vein, the mobility index drawn up by Google points towards a sharp decline since the end of September in most European countries, a trend that will continue in light of the new restrictions on mobility imposed in most economies in recent days. On the other hand, in this context of pandemic, inflation remains very weak: in October, headline inflation remained at –0.3%, a far cry from the ECB’s target rate and with no clear signs of improvement in recent months. Core inflation also remained stable at a weak +0.2% (not only due to the impact of the COVID-19 pandemic, but also due to the base effect of different tax cuts). These levels, and the prospect of them persisting over the coming quarters, led the ECB to prepare additional monetary stimuli ahead of its next meeting in December (see the Financial Markets section for further details). 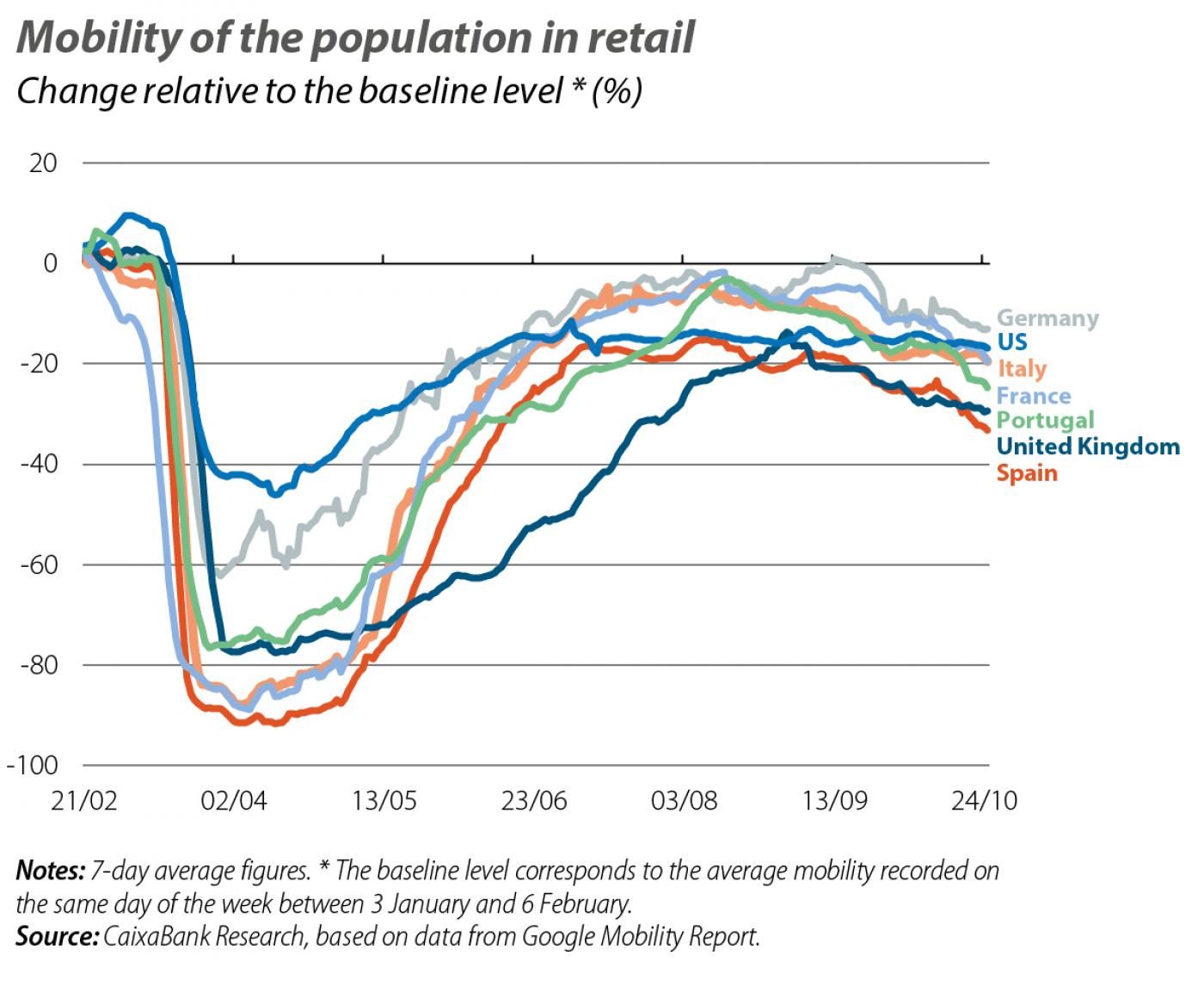 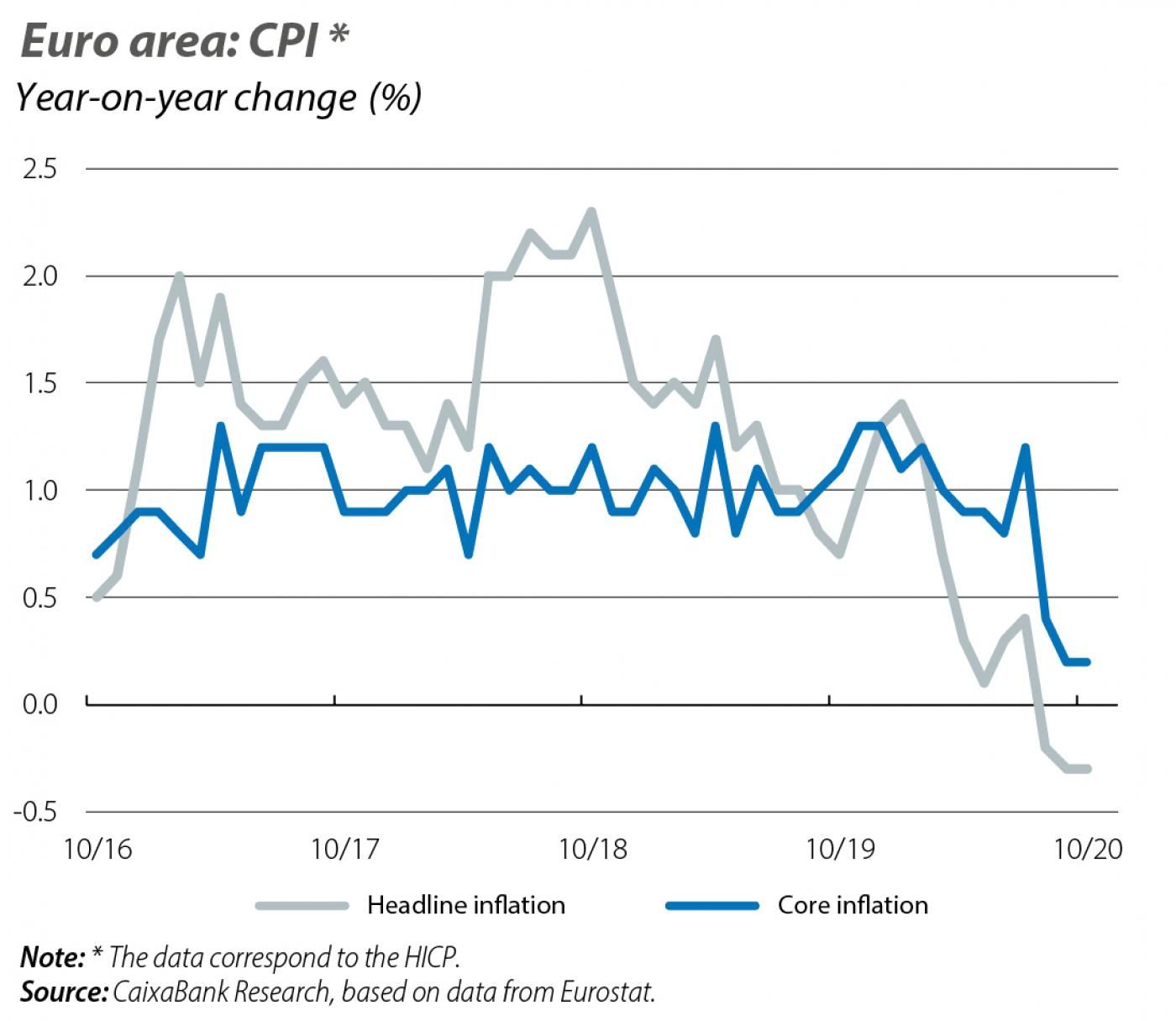 The recovery gains strength in China

China’s GDP advanced 4.9% year-on-year in Q3 2020 (+2.7% quarter-on-quarter), well above the 3.2% year-on-year rate of the previous quarter and with a more favourable composition (less reliance on public investment). Furthermore, the economic activity data for September, which were published together with the GDP figure, indicate an increasingly widespread consolidation of the recovery. Industrial production increased by 6.9% year-on-year (5.6% in August) and retail sales grew by 3.3% (0.5% in August). China’s ability to control the pandemic has been key to establishing a rapid and comprehensive recovery. Strict restrictions on mobility, contact tracing and mass testing have been the tone of the country since the beginning of the year. Looking ahead to the coming months, we expect the Chinese economy to settle into its recovery. In this regard, the strength of domestic demand, with sturdier employment, should allow the fiscal stimuli to be relaxed by the end of the year in an economy in which debt, both public and private, remains a risk to be taken into consideration (see the Brief Note of 19-10-2020 for details). 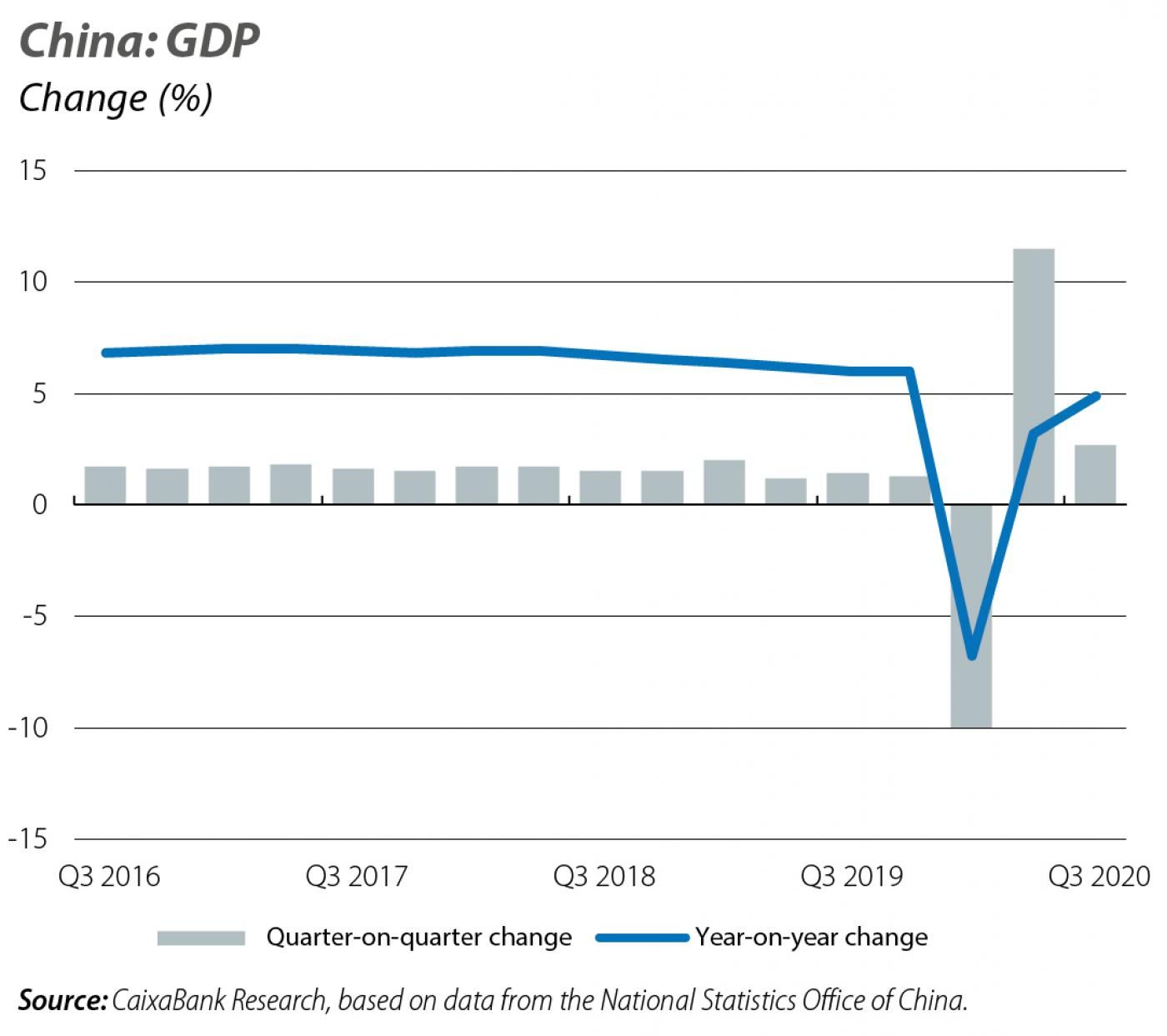 In clear contrast to China, most emerging economies remain highly constrained by the COVID-19 pandemic

The epicentre of the pandemic was located in China earlier this year, but it gradually spread to the rest of the world. The Chinese economy contracted in Q1, but already showed a significant rebound in Q2, which has only been consolidated in Q3. In contrast, in the rest of the emerging economies, the rebound did not occur until Q3. Furthermore, none of them seem to be exhibiting the same buoyancy in their recovery as the Asian giant did. Mexico, for example, grew by 12.0% quarter-on-quarter in Q3, partly offsetting the substantial decline of Q2 (–17.1%). In year-on-year terms, the drop in GDP amounted to 8.6%, placing it among the hardest hit countries. The outlook for the Mexican economy over the coming months does not look terribly promising either, since it remains in the midst of the pandemic and no decisive economic policy measures have been implemented to alleviate the shock of the COVID-19 crisis. In any case, certain other, so-called «fragile» emerging economies are in an even more delicate position. The sharp depreciation of the Turkish lira in recent weeks indicates that Turkey is suffering from a combination of heightened geopolitical risk (with Russia and France, recently) and macroeconomic imbalances (with high inflationary pressures and excess debt denominated in foreign currencies), which are proving difficult to bring under control. 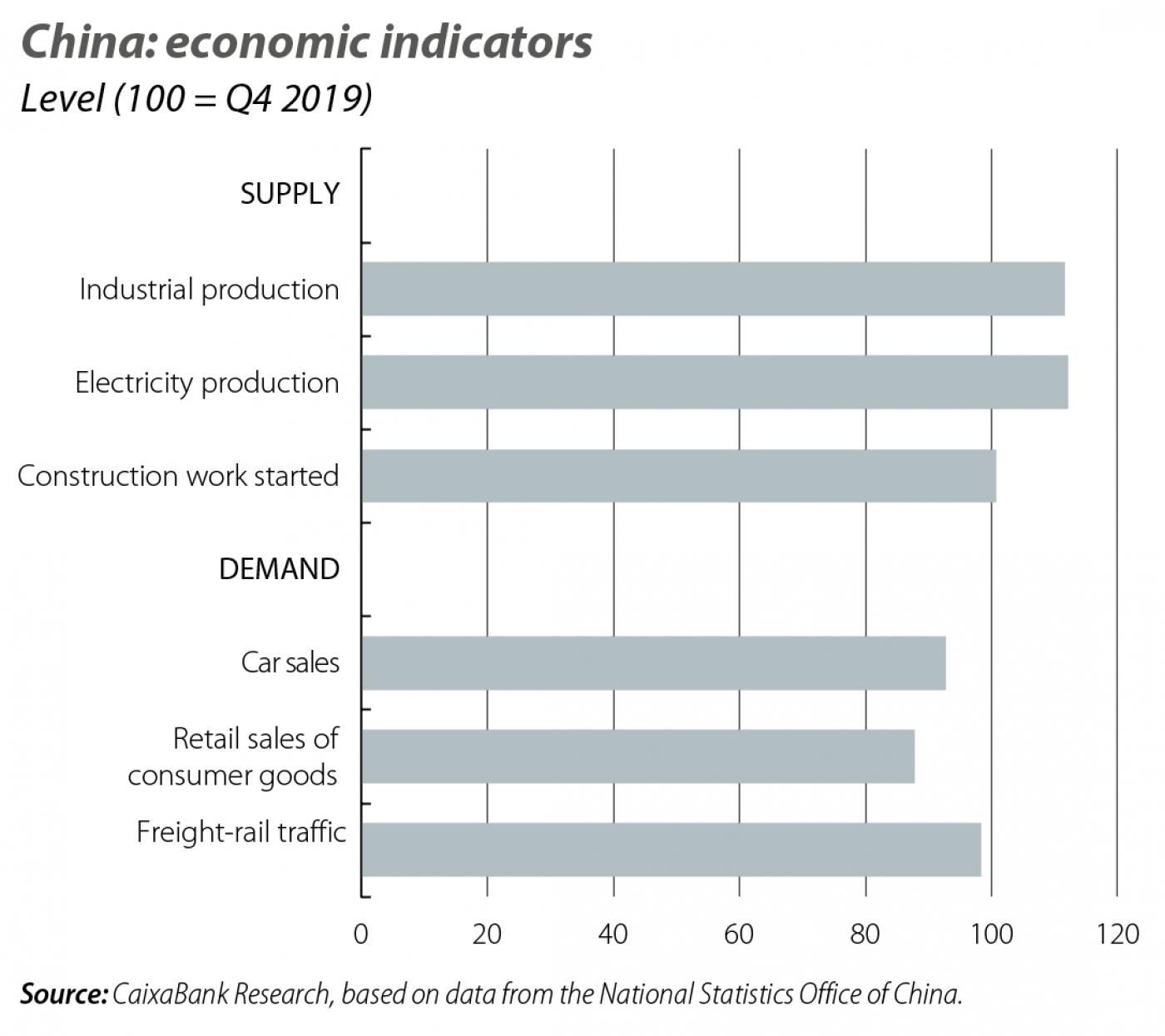 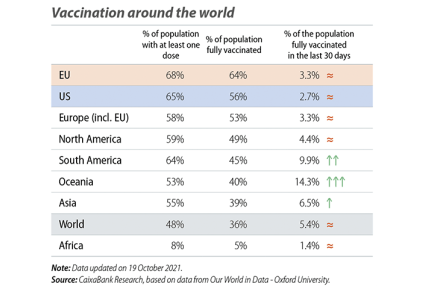 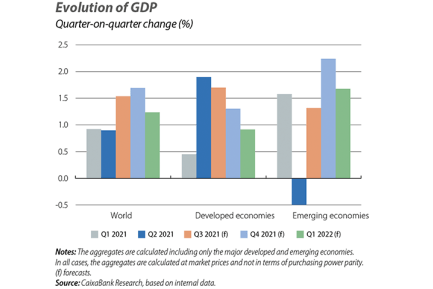 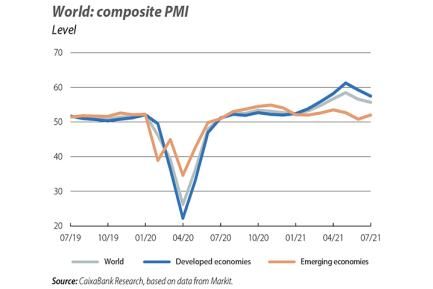