Infrastructure in the European Union and the Juncker Plan

The Treaty of Rome, which celebrates its 60th anniversary this month, already stressed the importance of trans-European infrastructures and established a common transport policy. The aim was to help create a single market and reinforce economic and social cohesion in Europe. Sixty years on, infrastructure investment is still perceived as a crucial aspect of the European project and the Juncker Plan is a clear sign of this.

Infrastructures are fundamental to boost a region’s economic growth. The right infrastructures reduce production costs and help the flow of goods, services, people and information. As they integrate markets, they also encourage competition, increasing incentives to innovate and improving productivity. The European Union (EU) is a case in point. In order for the European single market to perform at an optimum level, the region requires integrated infrastructure networks for transport, energy, telecommunications, etc. that link all its member States.

The development of the Trans-European Networks (TEN) was established as a priority in the 1992 Maastricht Treaty. These include not only the prominent transport networks (TEN-T) but also those for energy (TEN-E) and telecommunications (eTEN). TEN-T networks consist of nine European corridors that, by 2030, should unite 94 European ports with railway and road connections, 38 key airports with train connections to the major cities, 15,000 kilometres of high-speed trains and 35 cross-border projects to reduce bottlenecks. In the case of energy, the TEN-E network is expected to improve the cross-border interoperability of the electricity and gas networks and also boost renewables. Finally, the aim of the eTEN telecommunications network includes modernising broadband networks and launching trans-European electronic services of common interest in the areas of health and public administration.

In general, infrastructures have improved substantially in the European Union since the TEN network project began. However, according to the European Investment Bank (EIB) there is still a significant gap in infrastructure investment. By their estimates, the shortfall between the investment made in infrastructures and that required to achieve the different global benchmarks will reach 335 billion euros a year in the next five years. More than 30% of this gap concerns energy infrastructures to guarantee energy supply in the EU, modernise distribution networks and achieve greater energy efficiency in buildings and industry. In the era of the knowledge economy, of note are telecom infrastructures, which account for 19% of this gap, requiring improved data management capacity and cyber-security. The rest of the infrastructures required are related to logistics and transport (24% of the gap) and water and waste management (27%).

Since infrastructures are almost public goods, part of this investment could be via public funding. However, the hefty investment required and the difficulty of selecting the right projects to ensure efficient infrastructure investment has raised the profile of public-private partnerships (PPP) in the European case (see the article «Infrastructure: the common ground» in this Dossier for more details). Doubts regarding the investment required in such a context of technological change, as well as the degree of risk involved, mean that the public sector is increasingly acting as a catalyst for investment, providing legal security (clear rules) while the private sector takes care of the project design and most of the investment.

The investment plan for Europe, better known as the Juncker Plan, is a paradigm for PPP: it aims to kickstart EU investment by mobilising financial resources more effectively, allowing the EIB to finance riskier but more innovative projects and getting rid of barriers to investment in the EU. The core of the plan is investment project funding via the European Fund for Strategic Investments (EFSI), set up in June 2015. With a capital of 33.5 billion euros, from contributions made by the European Commission (26 billion) and the EIB (7.5 billion) as a guarantee, it aims to promote investment in strategic infrastructure and in smaller businesses and midcap companies to the value of 500 billion euros between 2015 and 2020.1 At present, the implementation of the Juncker Plan is going according to plan. In January 2017, 31.5 billion euros of funding had already been approved for 444 operations in 28 EU countries, with an expected total investment of 168.8 billion euros, around 33% of the overall target. Most of the projects are investments in infrastructures and innovation in the sectors of energy, industry and transport, focusing primarily on large countries such as France, Italy, the United Kingdom and Spain. In fact Spain is one of the countries benefitting the most, with funding approved for 40 projects valued at 3.42 billion euros and a total investment of 23 billion euros.

One important part of the Juncker Plan also aims to raise investor awareness of the projects and reduce the difficulties associated with investment, such as regulatory fragmentation. The European Investment Project Portal promotes investment projects to attract private financing and provides support jointly with the European Investment Advisory Hub. The Plan also hopes to improve the investor environment in general, reducing the barriers to investment that still exist in the EU, such as red tape and market fragmentation.2

So far the Juncker Plan seems to have achieved a good level of investment, in line with expectations.3 However, it is still too early to draw any conclusions regarding its effectiveness or impact. Many projects have yet to be implemented and their results will be seen in the medium term. It is also difficult to evaluate whether the projects chosen would not have been implemented without the Plan, i.e. whether they are actually «additional». Their level of risk is also difficult to gauge, in spite of the fact that the degree of innovation and riskiness is a necessary condition to involve EFSI support. Claeys and Leandro believe it is premature to state that the EFSI has led to the funding of additional projects as most of those approved are very similar to others already financed by the EIB, and the little information available makes it difficult to judge their risk profile.4

The Juncker Plan acts as a complement to the infrastructure investment already made by the European Commission at a trans-European level, mostly channelled through other programmes such as the Connecting Europe Facility, Horizon 2020 and European structural and investment funds as part of the EU’s cohesion policy. In any case, it represents a shift in public intervention in infrastructure investment towards redressing market faults and underinvestment, in which public funding is used to attract private capital and help the financing of a larger number of projects.

2. EIB (2016), «Breaking Down Investment Barriers at Ground Level. Case studies and other evidence related to investment barriers under the third pillar of the Investment Plan for Europe». 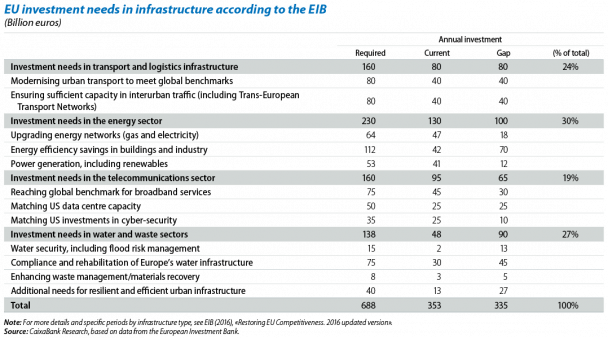 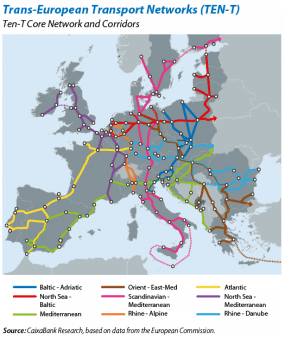