Reserves in the emerging countries: is the buffer big enough?

In 2015 strong capital outflows surprised most of the emerging countries. After years of massive inflows, the start of monetary normalisation in the US and fears of more moderate growth in the emerging block were the main triggers for this situation. Undoubtedly the large buffer of international reserves accumulated over many years helped to cushion the impact of these outflows. But, after this episode, is the buffer still solid?

To find out we have analysed the level of reserves held by a selection of emerging economies according to the measure used by the International Monetary Fund (IMF).1 This measure takes the form of a ratio between the reserves and different potential sources of capital outflows. These sources, and the reason why they are taken into account, are as follows: (i) Exports, to reflect a possible adverse shock regarding foreign demand or the terms of trade; (ii) Money supply (M2), to capture capital outflows through more liquid assets; (iii) Short-term debt, to reflect the risk of not renewing this debt, and (iv) other liabilities in portfolio that may exit the country.2 When this IMF ratio is above 100% it means that the country would be able to endure one year of capital outflows without running out of reserves.3

This index therefore serves to identify those countries whose reserves might not be large enough to withstand a possible adverse shock, as is the case of Egypt, South Africa and Malaysia (see the graph). However, such a ratio should not be considered an unequivocal sign that a country has problems or even that it is free from them. There are countries whose index is not informative and those for which we should take extra considerations into account that also affect the need for reserves. In particular we have to be extra cautious when looking at economies with certain peculiarities in the different sources of potential capital outflows that make up the denominator for the ratio. For example, a country with capital controls, such as China, will require a lower reserve ratio. Similarly countries that impose minimum periods to hold assets or taxes that discourage early redemption could require fewer reserves as a percentage of their liability portfolio.

On the other hand, the IMF's measure in the case of Russia is a clear example of poorly founded optimism. The country's ratio is far above 100% and even improved between 2013 and 2015 in spite of a 27% fall in reserves. This improvement was mainly due to a sharp drop in exports as a result of the slump in oil prices (oil represents one third of all Russia's exports) and also limited access to international debt markets due to sanctions. It therefore comes as no surprise that, in a recent report, the IMF advises Russia to have double the reserves ratio suggested by its standard measure.

The case of Angola is similar to that of Russia. Its index is around 300% in spite of a 30% drop in its reserves between 2013 and 2015. In part this is due to the collapse of oil exports (which account for 98% of all the country's exports). Consequently, those countries that are highly dependent on commodities exports will generally require a reserve ratio in excess of 100 as they tend to encounter more difficulties when there is an adverse shock in foreign demand, given that commodities are relatively price-inelastic. We should also add the Angolan economy's high dependence on the dollar, which means that the minimum level of reserves required is even higher. All this has led to the country recently having to ask the IMF for aid.

In summary, the IMF's measurement is a good starting point to analyse the position of emerging countries in terms of their international reserves and there is evidence that, the lower the ratio, the higher the probability of a crisis in a country's balance of payments. However, it is advisable to remain critical and complement this analysis with alternative measures.

2. Unlike the IMF we have not included bank loans between these liabilities due to a lack of data. 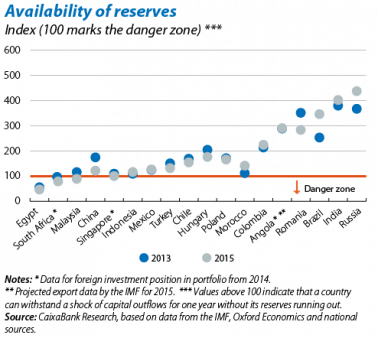