Since 1 August, the Turkish lira has depreciated by around 20%, making it the second worst-performing emerging currency after the Argentine peso. So far this year, its accumulated depreciation amounts to approximately 40%, again second only to the peso. The interest rate on 10-year bonds has also risen by about 900 bps since the start of the year, bringing it to 20.3%. In short, we are witnessing a fully-fledged foreign exchange crisis, with an uncertain outcome. How did Turkey reach this point? What alternatives are there for the future?

On the surface, this selling frenzy of the Turkish currency in recent months appears to have been triggered by a diplomatic escalation between the US and Turkey, which led to the US announcing the establishment of tariffs on steel and aluminium imported from Turkey. However, this is only a superficial reading. While it is true that these two countries have had disagreements on foreign policy over the last few years, the root cause of the Turkish currency crisis is of an economic nature: it is a sign that we are probably looking at quite a classic case of overheating of the economy.

In recent years, but particularly since late 2016, Turkey has experienced a phase of strong growth (average GDP growth of 6.6% since Q4 2016). Inflation over the same period, meanwhile, stood at 11% on average (but with a tendency to spike, as shown in the first chart) and the current account deficit stood at 6.5% of GDP.

Thus, the essential traits of a pattern of unsustainable growth remain clear: the strong increase in the growth of economic activity has been achieved at the price of accumulating very high internal and external macroeconomic imbalances. The rise in prices points towards the inability of the Turkish economy to grow without exacerbating bottlenecks, and the inflated current account deficit indicates an overuse of external financing. The latter trend also presents an aspect that is a particularly delicate in the current context of a gradual tightening of global financial conditions: Turkish companies have taken advantage of an environment of abundant and cheap foreign financing in order to borrow in foreign currency (dollars and euros, mostly), to the point that this debt represents 36.3% of GDP, one of the highest rates among the major emerging economies. The end result is that, while most emerging economies are showing growth rates commensurate with their potential (or even slightly lower), in Turkey the output gap is estimated to be between +2% and +3%.

The overheating of the Turkish economy has been compounded by the economic policy that has been followed. Far from tackling the imbalances with a decisive counter-cyclical policy, the general approach has been to deny the very existence of excessive growth. In particular, and despite the accumulation of pressures on prices, the monetary policy kept the reference rate at 8.0% between late 2016 and May this year (i.e. a negative real rate for an economy that was growing above 7% for much of this period). The result, predictably, is that investors have begun to question the credibility of Turkey’s monetary policy: while medium-term inflation expectations were less than 8% a year ago, they are currently touching on 20%. The measures adopted in the monetary policy since May (among other minor decisions, to adopt different macroprudential measures, to raise the reference rate from 8.0% to 24.0% and to limit companies’ ability to operate in foreign currencies) have been viewed as being too little too late, given the scale of the imbalances that have accumulated. In addition to this, the fiscal policy, which is traditionally a strong point of economic policy, has also failed to act decisively (only now are there indications of a primary surplus being achieved in the future, after several years in which there have even been significant increases in public salaries). As a result, the lack of credibility is not only limited to the monetary policy but extends across the entire economic policy.

For those familiar with the country’s economic history, this sequence of events remains somewhat paradoxical. Turkey seemed to have taken ownership of the lessons of the strong macroeconomic adjustment experienced in 2001 and the radical changes to the economic system that followed (with the consolidation of the banking system, a new and stricter approach to public finances and the reinvention of the central bank as a truly independent entity). This was a highly-successful experience which helped the country to achieve a modern market economy for the first time, with an institutional basis comparable to that of the best emerging economies.

Although the straying from orthodox policies may be due to many factors, the exceptional political situation in the country in recent years appears to have been an essential ingredient. In the space of just a few years, Turkey has undergone substantial changes in its external and internal political context, and managing these changes has posed a challenge for the Government, just as it would have for any other country subjected to similar situations. First of all, from an external perspective, the seismic change in the Middle East, with conflicts as brutal as the Syrian civil war and the fight against ISIS, has had a significant impact. National policy has had to manage everything from military and internal security challenges to those brought about by the flow of refugees. However, there have been a number of other factors in addition to this. There was an attempted coup in July 2016, which led to an increase in internal intervention, Turkey has taken on a difficult reinvention of its constitution (which involved shifting towards a presidential model, far removed from that which has been in place since 1923, when the republic was established) and there have been key presidential and legislative elections in 2018, already under the new rules of play. In this situation, a macroeconomic adjustment, which would have led to inevitable social costs, would have eroded the political capital available. This option, which perhaps could be forgiven in 2016 when investors generally had a more complacent view of the emerging risks, has been unsustainable in 2018, when the impact of global uncertainty and the tightening of the Fed’s monetary policy on emerging economies with greater imbalances has become virulent.

Now, Turkey has to simultaneously confront strong pressure on both the real and financial sectors of its economy. First and foremost, the current situation, with a de facto sudden stop to capital flows, is going to lead to an inevitable adjustment in economic activity. In this regard, the slowdown seen in Q2, when growth stood at 5.2% compared to 7.3% in Q1, can only be the prelude to greater economic weakness to come. Although the exercise of predicting forecasts during a period of fully-fledged financial turbulence is especially uncertain, CaixaBank Research predicts a rapid decline in growth, which could end up being the lowest since the Great Recession of 2008-2009. This loss of momentum will be accompanied by the maintenance of double-digit inflation over the coming quarters. Despite the lower pressure on the demand side, over the next few months we will see the knock-on effect of the currency’s depreciation in the prices of imported goods. As for the financial aspects, the difficulties are even greater. Given the high level of foreign-currency debt that the Turkish economy has accumulated, covering payments and renewing this debt, in a context of a heavily depreciated lira and with international interest rates expected to
rise, represents a particular challenge. In this situation, companies’ financial difficulties are likely to lead to a rise in non-performing loans in the banking sector.

Against this background, what are the options that remain open? In essence, the economic policy decision-makers have several options at their disposal to stabilise the situation. The least orthodox option, and the one with the highest risk of proving insufficient, and perhaps even counter-productive, is to establish capital controls. The most conventional option would be to extend the adjustment programme, combining a fiscal adjustment with a tightening of monetary policy. The decisions taken in the last few weeks, with the increase in the reference rate and the announcement of a fiscal adjustment equivalent to 1.3% of GDP, are steps in this direction. These measures would have a greater chance of success if they were accompanied by financial aid from the IMF, a possibility that has been repeatedly rejected by the Turkish authorities but which would help the economic policy to regain credibility more quickly. In the absence of IMF funding, the adjustment could end up being less gradual and more intense. Turkey, in short, has virtually run out of time and is left with little margin to react. The match is far from lost, but stoppage time is almost over and a way out must be found urgently. 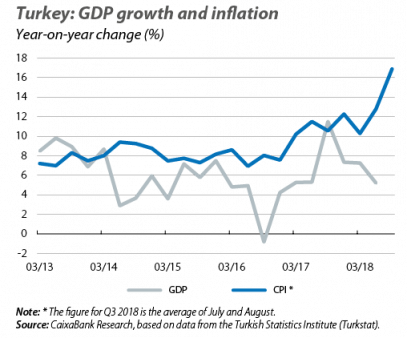 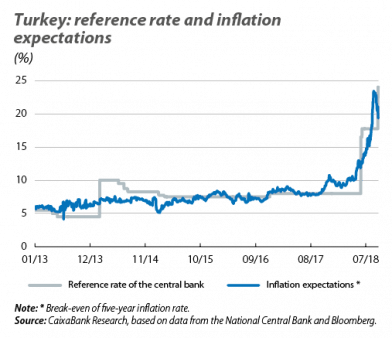 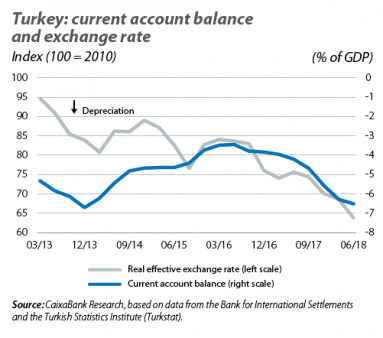