The public finances, the Achilles heel of the Brazilian economy

Brazil’s new president will not have much time to celebrate his victory. The challenges facing his country are vast, so he would do well to quickly transition from election promises to taking action. Specifically, the new cabinet’s first priority should, without a doubt, be to deal with the difficult situation of the public finances.

From a European perspective, we must not view Brazil’s economic situation as a distant problem that should only concern those who have invested in the country. On the one hand, unlike other emerging economies, such as Turkey or Argentina, Brazil’s financial and economic interconnections with the rest of the world are substantial. On the other hand, in addition to being the largest economy in Latin America, Brazil is a key supplier of various raw materials at the global level.

Given the country’s systemic importance, it is no wonder that Brazil always receives significant attention from investors. In recent months, this attention has largely focused on the new Government’s ability to implement the much-needed - but almost always delayed - structural reforms that the country requires. These include improving the transport and energy infrastructure, the regulatory framework - which remains excessively complex and ineffective - and the chronic problems of insecurity. However, the greatest concern is that surrounding Brazil’s public finances, which will be increasingly difficult to put right if decisive measures are not taken.

The concern is well-founded too: in 2017, the budget deficit stood at 7.8% of GDP, while public debt stood at 74.0%, significantly higher than the levels common among emerging economies. Furthermore, these levels have been reached relatively quickly, since in 2013 these two figures stood at 3.0% and 51.5% of GDP, respectively. In addition, everything indicates that these figures will continue to deteriorate if decisive measures are not taken.

What factors are causing the imbalance in the public finances to rise? One natural candidate is the performance of the economy itself, which in recent years has had to deal with a severe recession and a meagre recovery: while average annual growth stood at 3.3% in the period 2009-2013, over the past four years this figure was as low as –1.4%. Nevertheless, according to IMF estimates, the budget deficit actually recorded and the cyclically-adjusted budget deficit are relatively similar almost throughout the period between 2002 and 2017. In other words, the government balance is deteriorating due to structural reasons unrelated to the poor economic performance of recent years.

A second usual suspect in countries with a high level of government debt is interest payments. Between 2014 and 2017, when the budget deficit stood at 8.2% of GDP, interest payments were equivalent to 6.6% of GDP on average (i.e. the bulk of the deficit was due to interest payments, while the primary budget deficit was much smaller, at 1.6% of GDP). However, if we extend the time frame, the conclusion remains unchanged: in the «good years», that is, from 2000 to 2013, Brazil paid an annual average of 6.1% of GDP in interest. This is a heavy burden, and it will be difficult to change in the short term, but the deterioration of Brazil’s public deficit does not seem to be exclusively the result of a rise in the cost of debt.

A third common candidate when explaining a deterioration in public finances is a low level of revenues, which is an Achilles heel for many emerging economies. Yet this is not the case either. Brazil’s revenues are high: although they have declined somewhat in recent years as a proportion of GDP, public revenues still amount to more than 30% of GDP (the OECD average is of the order of 35%).

In short, none of the above factors by themselves explain the deterioration of the budget deficit, and consequently the escalation of debt, which has occurred to some extent since 2014 and with greater intensity since 2015. To identify the real cause, we must focus our attention on the expenditure side. Over the last few years, there has been an increase of more than 25% in public expenditure. This is clearly a significant increase, unprecedented in recent decades. Furthermore, given the strong inertia of Brazil’s public expenditure, a situation of hysteresis arises (i.e. the change persists over time). This explains why attempts to react tend to have little effect. Thus, despite a cap being established on the main items of social expenditure under the central Government in 2016 (such that they could not grow above inflation), this measure has only served to bring expenditure below 40% of GDP. The rising trend of recent years has certainly slowed, but it has not yet been corrected.

The key underlying problem lies in the fact that the Government is only directly responsible for a relatively small portion of public expenditure. Therefore, even if we deduct the interest payments, approximately 80% of the central Government’s primary expenditure consists of non-discretionary expenditure. In particular, over 40% of primary expenditure goes on Social Security (S.S.). This is an area of expenditure that has been growing over the years and which shows no sign of subsiding in the future. According to IMF estimates, expenditure on pensions will rise from around 14% of GDP in 2021 to 18% in 2030 and to 26% in 2050. This significant increase is not a result of an adverse demographic situation, as is the case in many developed economies. Various studies reiterate that Brazil has a very generous system, given the available resources.1 Specifically, it is relatively common to retire at a young age (after making social security contributions for 35 years in the case of men, and 30 years for women, there is no minimum retirement age), with high replacement rates. In this regard, it is regrettable that the previous Government’s attempts to achieve even a moderate reform of the system, focusing on increasing the contribution requirements and setting a mandatory retirement age, failed.

The situation of the public finances is, therefore, a difficult one.The range of alternatives available to the new Government is certainly limited, unless it were to opt for a profound change in the expenditure system, which seems unlikely in light of past experience. In the absence of such a major reformwe will most likely witness a difficult period under a programme of cuts that will seek to reduce discretionary expenditure, contain public salaries and reform the S.S. system. In a manner similar to the reform that failed in the previous term. On the revenue side, we can expect to see some increase in tax revenues, as well as a certain reordering of the tangle of discretionary fiscal benefits and a modest privatisation process, but the fiscal impact could end up being limited. The fiscal outlook is, and will continue to be, difficult. As a result, doubts surrounding the sustainability of the public finances continue to be a source of uncertainty, for Brazil... and for the world. 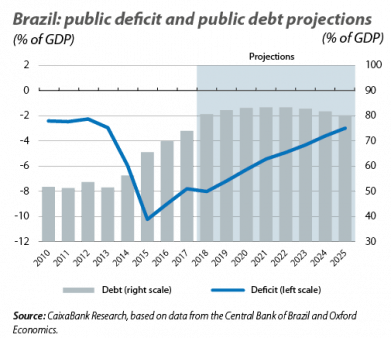 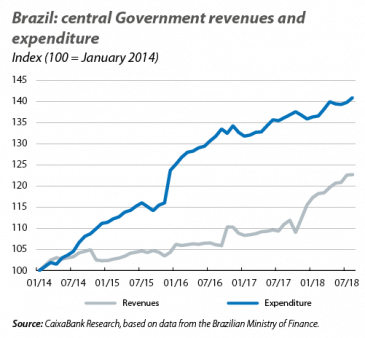 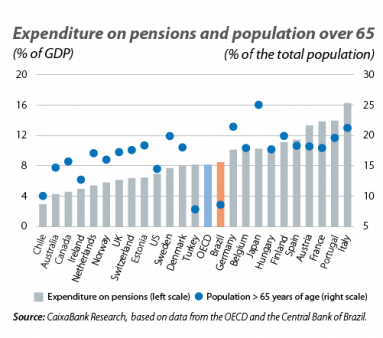