The need to increase investment in Europe has been pointed out by several international bodies and was analysed for the case of infrastructure in the Focus of MR11 «Investment in infrastructures: an appetising proposition but often with unexpected consequences». However, Europe's public sector has little margin to provide a widespread, significant boost in all countries given the delicate state of public accounts. Neither does the private sector, on its own, have much room
to manoeuvre to finance investment projects as it is still immersed in deleveraging and battling with weak demand. The aim of the Juncker plan is to unite the forces of both sectors, encouraging private investment in an environment of abundant liquidity which is nonetheless not being used to finance new projects. Will it succeed?

The plan sets up a new entity, the European Fund for Strategic Investments (EFSI), initially provided with capital totalling 21 billion euros from the European Commission (16 billion) and the European Investment Bank (5 billion). The Commission will also allow countries to contribute to the EFSI's capital without this increasing their general government deficit. Based on this initial capital, the plan is to issue around 60 billion euros of debt which will be used as a guarantee to attract a further 245 billion euros of private funding, thereby reaching a total of 315 billion euros in investments over three years, equivalent to 0.8% of Europe's annual GDP (see the graph).

The European Investment Bank will be in charge of setting up the EFSI, which will start operating in 2015. The kind
of investments to be financed are long-term projects for strategic infrastructures (such as transnational energy connections, broadband, etc.), transport, education and R&D. Part of these investments might be made via project finance; i.e. private financing that is specifically created to carry out a certain investment project. At present, Europe's project finance market is relatively undeveloped compared with other regions (see the graph), partly due to differing legislation in each country, and the Juncker plan may help to improve this situation.

The EFSI will also inject capital and issue guarantees to help programmes to securitise loans to SMEs and mid-cap companies. In addition, the EFSI's resources could also be used to invest in European Long-Term Investment Funds, the European collective investment framework for infrastructures, as well as in firms that require long-term capital.

The EIB's technical assistance in terms of structuring, implementing and monitoring projects ensures some efficiency and transparency although details have yet to be announced regarding how the projects will be selected and the degree of guarantee provided by the EFSI, key aspects for the programme's success. It may be more difficult to attract private investors due to the limited capacity of public capital to absorb losses, a priori restricted by the ambitious level of leveraging planned by the EFSI. It should be noted, however, that although the guarantees issued by the EFSI will be limited, they can improve the risk profile of projects and therefore the interest rate required to finance them.

Consequently, although the macroeconomic impact of the Juncker plan is uncertain, it is potentially considerable. On the one hand, the EFSI might end up financing projects that would have been carried out anyway and, if this is the dominant trend, the programme will have little impact. Other earlier investment plans, such as Barroso's 120 billion euro plan in 2012 («compact for growth»), did not have much effect. But if, on the other hand, the guarantees provided by the EFSI are designed well, it could significantly speed up the implementation of projects that are currently shelved. The plan should also help to standardise legislation at a European level and reduce the obstacles represented by different sector regulations, boosting investment in Europe in general and project finance in particular. 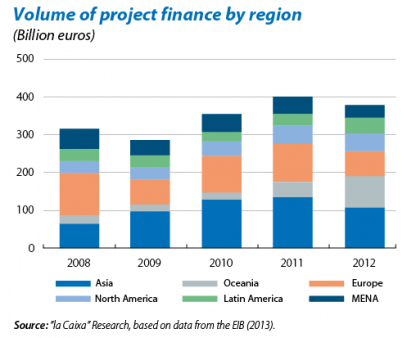 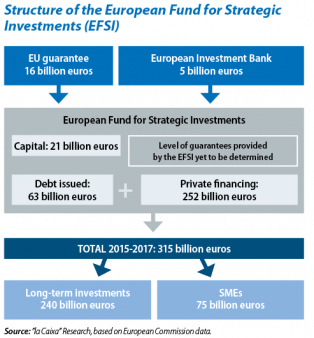