Population ageing and its macroeconomic impact

According to a study recently published in the medical journal The Lancet,1 by 2040, 59 countries will have an average life expectancy of more than 80 years, including Spain and Portugal. The average life expectancy of Spaniards will be the highest in the world and will reach 85.8 years, even higher than that of the Japanese (85.7 years). The authors of the article attribute this first-place position to the Mediterranean diet. In Portugal, life expectancy will be somewhat lower (82.0 years), but it is also expected to increase substantially (by more than 3.5 years) over the coming decades.

The increase in life expectancy is excellent news, since it is one of the great achievements of our society, but we must be aware that it can lead to far-reaching economic consequences. One of the reasons for this is that, in the vast majority of countries, increases in life expectancy will not be accompanied by an increase in the birth rate that would prevent the population from ageing. Therefore, over the next 15 years, the elderly population will increase significantly as a proportion of the total, while the relative weight of the working-age population will remain constant, or even decline. The ageing of the population is a phenomenon with far-reaching consequences: the change in the population of each age group, both in absolute and relative terms, can have an extensive impact on economic growth, especially if the behaviours of each age group do not adapt to the new demographic dynamics.

The main factor which can weigh down an economy’s level of production, in the context of an ageing population, is the reduction of the labour force. If there are no significant changes in the employment rates of the elderly population, a decline in the working-age population will reduce the aggregate labour force and, therefore, the total GDP of the economy. Furthermore, to the extent that the decline in savings of the older population can exceed the savings of those who have not yet retired, the economy’s stock of capital could also decrease.2 On the other hand, population ageing increases the proportion of pensioners compared to workers, which adds tensions in the actuarial calculations in a pay-as-you-go pension system like the one we have in our economies. As such, the theoretical framework suggests that population ageing could lead to a reduction in both individual well-being (GDP per capita) and that of the country in aggregate (total GDP). In addition, it could have significant consequences for the sustainability of public debt and the pension system.

It is important to clarify that the economic implications of population ageing will also depend on whether the behaviour of each age group changes as a result of the change in the demographic structure and greater life expectancy.3 Firstly, it is possible that people will decide to work more, either by increasing their level of participation and the number of hours they work, or by extending their working life to make the most of an increased life expectancy and better health for more years. Workers could also decide to save more in order to finance a longer period of inactivity.4 Finally, if the appropriate policies are implemented in education and training, there could be an increase in investment in human capital, which would help to increase the population’s labour productivity.

Thus, the aggregate economic impact of the ageing of the population is a highly empirical issue. What do the data tell us? The evidence to date does indeed point towards lower economic growth as a result of the ageing of the population.5 According to Aksoy et al. (2018),6 the decline in the working-age population will significantly reduce growth in OECD countries between 2015 and 2025. On average, they estimate
a 0.64-pp reduction in the potential growth rate, which is by no means insignificant. In addition, the growth of GDP per capita will fall: according to OECD estimates,7 potential growth in GDP per capita will decline by 0.25 pps in the 2030s. It should be noted that the impact would not only be caused by the lower growth of the workforce, but also by the lower labour productivity associated with population ageing. Maestas et al. (2016),8 for instance, estimate that two-thirds of the reduction of growth in the US will be due to lower labour productivity.

What will be the economic impact of the ageing of the population for Spain and Portugal over the next 15 years?

Firstly, we must analyse what the possible scenarios are for population ageing in both countries. Over the next 10 to 15 years, changes in the working-age population will not be particularly influenced by changes in birth or mortality rates. Therefore, it is possible to predict the working-age population in the coming years with some accuracy, with the exception of migration flows, which are much more volatile by nature as they depend both on economic conditions in the origin and destination country and on other factors such as family circumstances or humanitarian crises.9

These projections assume positive average migration flows between 2018 and 2033, of around 220,000 net entries per annum in the case of Spain10 and of around 14,000 for Portugal. The dependency ratio would be even greater if migration flows were nil, reaching 44.6% in 2033 in Spain and 49% in Portugal. Therefore, it is important to emphasise that migration flows slow down the population ageing process (especially if the flows are significant, like those forecast for Spain), but they do not fully offset the ageing of the population. To maintain the current dependency ratio in 2033, it would take a net inflow of working-age immigrants in the period 2018-2035 of more than 11.4 million in Spain (750,000 per annum) and of 2.6 million in Portugal (175,000 per annum), unusually high figures.

With regards to GDP per capita, in the period 2000-2016 in Spain,12 the increase in the labour force was greater than that of the total population, which led to it making a 0.3-pp contribution to the average growth in GDP per capita of 1.1% per annum. Between 2018 and 2033, in a scenario with no increase in the employment rate and with no migration flows, the labour force would decline at a greater rate than the population, and GDP per capita would fall by 0.2 pps. On the other hand, in the scenario with the migration flows and the increases in the employment rate that are predicted, the contribution would be positive, albeit small (0.1 pp) and slightly lower than that observed over the past few years.

In short, these scenarios show how the greater relative weight of the older age group could have a negative impact on aggregate economic growth over the next 10-15 years. However, they also show how this effect could be partially mitigated by taking the appropriate measures, hence the importance of behavioural changes in society, such as an openness to taking greater advantage of the significant opportunities offered by longer life expectancies. The role of public and private institutions is therefore fundamental: the former can promote policies that, for example, allow for a flexible retirement age, while the latter must take full advantage of the talent of their more long-lived and experienced employees.

4. In the next article of this Dossier, «The demographic cycle of savings and interest rates», we analyse in detail the effects of the ageing of the population on the supply of global savings.

5. This does not mean that the economy’s productivity cannot increase due to other factors, such as technological changes, which are able to at least partly offset the effects of the population’s ageing.

10. In its demographic projections for 2018-2068, the National Statistics Institute of Spain has modified the methodology used to forecast migration flows, no longer assuming steady flows in the period for forecasting both the recent trend (2018-2022) and the dynamics towards an immigration target in 2033.

11. We use the expected changes per the «2018 Ageing Report», which predict that the employment rate for the working-age population will increase from the current rate of 61.3% to 67.4% in 2033 in Spain, and from 66.5% to 70.0% in Portugal. These increases would be a result of both the expected increases in the participation rate, particularly in the 55-64 age range, and the retirement age being pushed back by more than two years.

12. In Portugal, in the period 2000-2016, the labour force had a negative contribution of –0.1 pps to the average growth in GDP per capita of 0.7% per annum. Between 2018 and 2033, in a scenario with no increase in the employment rate and with no migration flows, GDP per capita would fall by –0.3 pps. In the scenario with the migration flows and the increases in the employment rate that are foreseen, the contribution would be negative, at –0.1 pp, similar to that of the previous period. 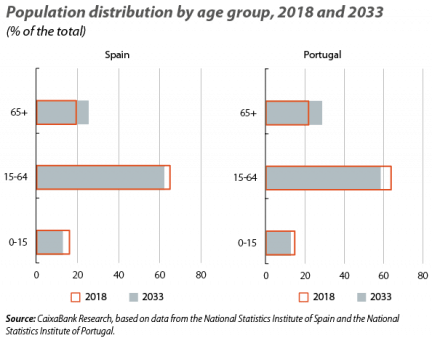 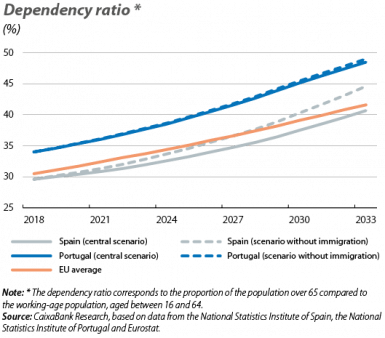 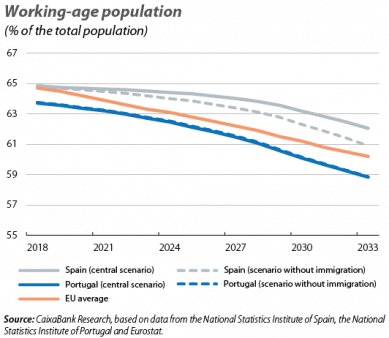