The return of immigration to Spain

• Spain has once again become a net recipient of immigrants since 2015 and the flows show an upward trend.

• Immigration has allowed the population in Spain to rise once again and makes a significant contribution to its labour market.

Immigration is back in Spain after years of crisis in which there were many more immigrants departing than arriving (between 2010 and 2014). More specifically, Spain has once again become a net recipient of foreign immigration since 2015 and the trend has intensified in recent years: net inflows of foreign nationals reached 330,000 people in 2018 according to the migration statistics of the National Statistics Institute. In 2019, entries may have reached around half a million, following the arrival of more than 200,000 individuals in the first half of the year alone (see first chart).1 On the other hand, and although it is on a much smaller scale, in 2018 the number of Spaniards returning from abroad exceeded those departing for the first time in a decade (net entries of Spaniards totalled 4,400), and this trend seems set to have continued in 2019.

This shift in the migration flows of foreigners seems to be more related to the improvement in the economic outlook in Spain than to other reasons, such as the refugee crisis.2 In 2017, the last year for which information is available by type of immigrant, only 1% of them came to Spain for humanitarian reasons. Most of the inflows were people with the right to free movement (44%) and with immigration permits for family reasons (36%) or work-related reasons (9%), according to data from the OECD.3 The variety in the entry categories is also reflected in the diversity of the immigrants’ countries of origin, since the top five countries were as geographically and economically diverse as Morocco (8.8% of entries), Colombia (7.5%), Venezuela (6.9%), Romania (6.9%) and Italy (6.3%).

The role of immigration in the labour market

Immigration is also playing a significant role in the labour market, since it is the main driver behind the return of growth in the labour force since 2018, a year in which it increased by 0.5% (22.8 million economically active people). Similarly, in 2019 the labour force increased by +1.3% (+290,000 individuals, of which 69% were foreign nationals). What is more, immigrants are not only entering the labour market, but they are finding work: 45% of the 402,000 individuals who found employment in 2019 were immigrants.

The level of education of immigrants who are in work is similar to prior to the financial crisis. 14% of them have a low level of educational (primary education or less), which is higher than the figure of 4% among workers with Spanish nationality in 2019. On the other hand, a notable percentage (30%) have a university education, which shows how a significant portion of the immigration into Spain consists of qualified people.4 However, there has been a change between before and after the financial crisis in the type of productive sectors in which immigrants are working (see third chart). Construction no longer employs 21% of foreigner workers (11% of native workers) like it did in 2008, with the figure for 2019 standing at 9% (6% for natives). In agriculture, there remains a high level of participation of immigrants (7% of foreigners work in the sector, compared with 4% of natives). But it is the services sector that tops the leader board in the hiring of foreigners: 74% of foreigners who are in work do so in this sector (76% in the case of natives). This is 12 pps more than in 2008, and they are employed in a wide variety of occupations, ranging from healthcare and domestic work to tourism, research and financial services.

All these figures show that immigration has returned to Spain and all the indicators suggest that it will continue to be needed, given its contribution to countering the ageing of the population5 and its role in supporting the economic transformation brought about by technological change.6 It is for this reason that migration policies should facilitate an orderly management of migration flows and the integration of immigrants who have entered the country.

1. Estimate by CaixaBank Research assuming that the flows of entries and departures follow the same relative trend in the second half of the year as they did in the first half of 2019. This trend is calculated for the period 2015-2018.

2. Starting in 2015, the refugee crisis did not lead to entries into Spain for humanitarian reasons on the scale seen in other countries such as Germany. All in all, asylum applications increased and reached 53,000 in 2018, in particular those from Venezuela (19,000), Colombia (8,500) and Syria (2,700). Approximately 1 out of every 4 asylum applications were accepted in 2018 in Spain.

4. Immigrants have a higher risk of being overqualified than natives (i.e. having a level of education that is higher than necessary for carrying out their work), although the gap between the two groups has reduced substantially in the past decade in Spain (OECD, «International Migration Outlook 2019»).

5. Immigration is one of the key factors for reducing the ageing of the population. For further details, see the article «Population ageing and its macroeconomic impact» in the Dossier of the MR11/2018.

6. For further details, see the Dossier «Technological change and productivity» in the MR02/2018. 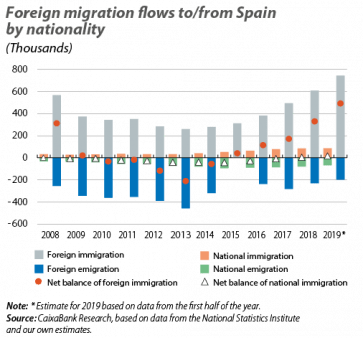 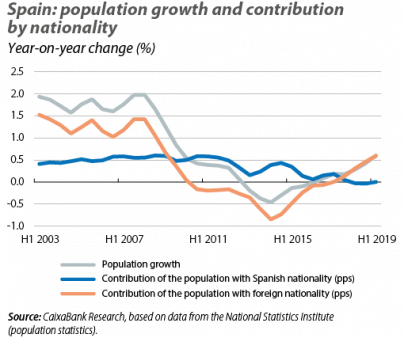 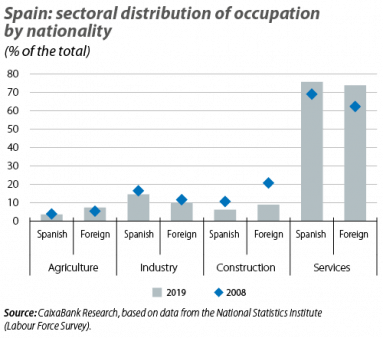