How to finance pensions

The substantial increase in life expectancy and therefore the share of the population of retirement age represents a challenge for the state pension system. This article analyses how the Social Security system is financed and explores how the revenue system used to support Spain’s pension system could be improved.

The Spanish Social Security system is currently financed mostly via contributions, accounting for 85% of all the system’s income. The rest comes from the state budget and is used to meet the cost of non-contributory pensions,1 so it has zero effect on the Social Security income statement.

Funding pensions via Social Security contributions is widespread across European countries and a key feature of contributory pension systems. In Spain, contributions represent 11.4% of GDP, a slightly lower level than in France (16.9%), Italy (13.1%) or Germany (14%). Nevertheless, the governments of these countries spend slightly more on pensions than Spain, as well as a higher tax burden in general.

Given the contributory nature of Spain’s pension system and the firm commitment of the Toledo Pact to keep it that way, what additional income can be found to curtail the decline in the pension replacement rate?2

The number of contributors to the system can be increased by focusing efforts on creating more growth and employment and by encouraging people to work. In 2016, the unemployment rate stood at 19.6%, much higher than the EU-28 average (8.5%). An unemployment rate close to the EU-28 average would therefore help to bring Social Security’s current deficit down and almost balance the budget. But in the medium term, if the decline in the replacement rate is to be minimised, we must employ measures that go beyond improving the labour market. Especially as the projected ageing of the population will increase the number of pensioners in relation to the number of workers, as explained in the article «Pension reform: an unavoidable debate» in this Dossier.3

It is therefore useful to explore the other mechanism to boost revenue, namely by increasing the contribution per worker. This can be done in several ways: by raising the tax rate, eliminating wage-based ceilings for contributions or limiting the use of tax breaks and exemptions for specific groups with employability problems. But all these measures are controversial to some extent. The main drawback, and this applies to all of them, is that an increase in revenue via Social Security contributions pushes up labour costs, making Spanish companies less competitive and potentially harming employment.

Given the limited scope to act on Social Security contributions and its associated problems, to what extent can part of pensions be funded via taxes? Insofar as certain pensions currently financed via Social Security contributions act more like a safety net, it would not be unreasonable to include them within non-contributory pensions, funded via taxes. The contributory pension could then be limited to retirement pensions, which currently account for 71% of all contributory pension expenditure, and the money for the rest of the pensions (essentially for widows, widowers and orphans) would come from the central government budget. This would cut Social Security’s current burden of expenditure by approximately EUR 20 billion.

But we must realise that merely taking the money from one budget or another will not resolve the underlying problem. To finance pensions, fiscal pressure will have to be increased or other expenditure reduced in the central government budget.

There are several different ways this can be achieved. For instance, via tax reform that widens taxable bases by eliminating tax breaks and exemptions. Revenue could also be increased by making a greater effort to minimise the black economy, estimated in Spain at around 18.5% of GDP,4 much larger than in Germany (13.3%), France (10.8%) or the UK (9.6%). Reducing Spain’s black economy to Germany’s level would augment state coffers by EUR 17-20 billion, a similar figure to the current Social Security deficit.

In short, although there is no magic wand to improve the funding of pensions, there is considerable scope for action. It is vital to evaluate the different options in order to choose the best path.

1. People in a specific situation of need and who lack sufficient resources to survive are entitled to non-contributory pensions for disability and retirement. These are not related to Social Security contributions.

2. The replacement rate is defined as the percentage of income received in retirement in relation to the prior income when working. 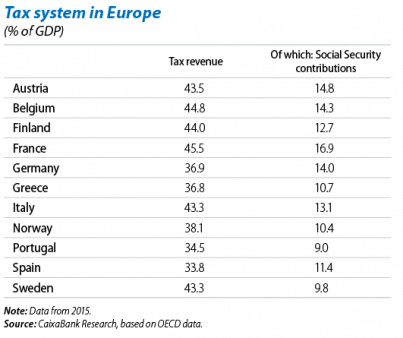 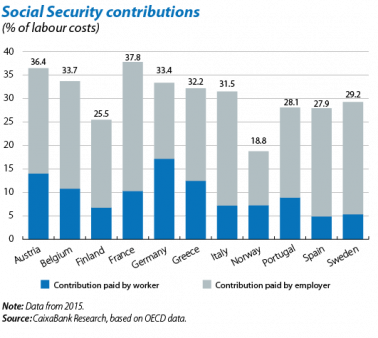