A longer life and a more active retirement

Do you ever feel there’s just not enough time in one day to do everything you want? Don’t worry. Although you may not believe it, our life expectancy is increasing by about four hours every day.1 This increase in longevity has been, and will continue to be, so enormous that it warrants closer inspection, especially in the context of pensions and how our working lives are organised.

Moreover, life expectancy is likely to continue increasing substantially over the coming years. Just how much life expectancy will increase is not certain as this depends, for instance, on future medical advances. But recent studies suggest that, in the advanced countries, it might exceed 90 for women in 2030, a figure that would have been unimaginable just a few years ago.2 For Spain in particular, in 2030 women are expected to live 87.4 years on average and men 82.3 years. Most of this longer life expectancy will be due to people over 65 dying later in life.

But longer lives will also include a more «healthy years». According to the OECD, around half the life expectancy after 65 will be enjoyed in good health.3 But this longer and better quality life in general does not preclude significant differences at an individual level. Factors such as different habits and exposure to health hazards will still affect our life expectancy. One example of such disparities is the life expectancy of individuals with different levels of educational attainment. For instance, men aged 65 with a higher level of education have 3.5 years more life expectancy than men with an educational attainment below the compulsory secondary level.4

These substantial changes in longevity have not been accompanied by equivalent changes in the retirement age. The average retirement age actually fell between 1970 and the mid-2000s, partly due to many people taking early retirement, and this trend has only started to reverse in the past ten years. Consequently, people are now retired for longer. In OECD countries, men have gone from being retired for 11 years on average in 1970 to 18 years in 2013 (see the first chart). Only some countries, such as Denmark, have implemented retirement systems where the retirement age increases automatically with the life expectancy.

This increased longevity, in many cases accompanied by good health, has extended the range of activities older people can carry out. One of these is being able to work in good health for longer. This is already happening to some extent .as the labour participation of older people has increased and is likely to go on doing so (see the Focus «Labour markets in the euro area after the crisis: a reality check» in MR11/2016). But the improvement in health allows for an even greater increase. For instance, Wise and his co-authors have estimated that, if workers aged between 55 and 69 in 2010 worked the same as those with the same state of health in 1995, they could work around 1.7 years longer on average in the 12 advanced countries studied.5

Another factor that makes it easier to work for longer is technological change, as this reduces the difficulty and physical effort required by many jobs. Technological innovations help to curtail the physical limitations that might have otherwise ended a working life. And new technologies such as robotization increase worker productivity. Older workers who benefit from this (in general those with a higher educational attainment) can increase their productivity and lengthen their working lives.

But technological and demographic changes, among other factors, do not have the same impact on all the older population that is still able to work. One sign of this greater heterogeneity is the change in the employment rate by educational attainment of the older population between 2000 and 2015 (see the second chart). The probability that some workers continue working beyond a certain age differs depending on their educational attainment and their job, and these differences have increased. While a university lecturer can continue giving classes beyond a certain age and their greater experience may be beneficial, it is less feasible to prolong working lives in other, more physical professions. However, the pension system’s design is almost binary in nature, going from full-time work to full-time retirement for all workers. Such was the situation in the past, when retirement was more because of physical limitations than any decision by the individual.

A more flexible division between working life and retirement would therefore be useful for those people who would like to do both. For instance, pension systems could allow retired people to work without penalising them financially. Empirical evidence shows that a lot of people carry on working beyond retirement age when there is a financial incentive to do so.6

But barriers to employment must also be reduced to increase the share of the older population in employment. We need to recognise that older people can still make a contribution to society as workers and provide them with the flexibility they need to continue working. Lastly, it is also important to improve the employability of older workers. In this respect, it will be crucial to encourage continued learning among workers, in particular given the pace of technological change.

A longer lifespan entails important challenges for the advanced countries such as how to finance their pension systems (see the article «How to finance pensions» in this Dossier) and long-term savings (see the article «Private savings for retirement: a complement to state pensions» in this Dossier). But, as we have seen, it also increases their response capacity. The generation born tomorrow will live four hours longer. Our challenge as a society is to ensure they can live those hours better. 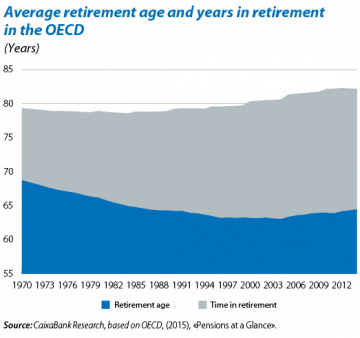 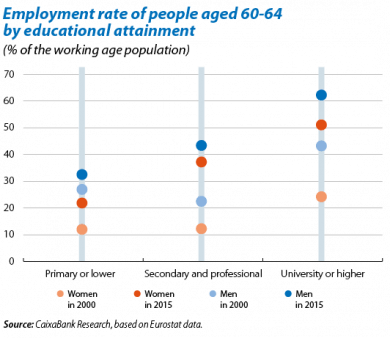