The phenomenon of immigration in advanced countries: from perception to reality

In a recent survey, carried out in 14 countries, the citizens were asked what percentage of the population they believed were immigrants. The average response was that this proportion was 24%, around double the real figure. In some countries this deviation was extreme: in the US the perceived share of the immigrant population was 32% (when it is actually 12%) and in Italy, 30% (when the real figure is 7%).1 These findings are not atypical as they have been confirmed by survey after survey.2 But is this the only perception bias regarding immigration? By no means. In another survey the British were asked about the composition of immigration, distinguishing between immigrants from the EU and those from outside the Community. Once again there was a discrepancy between perception and reality as the British believed that 25% of their immigrants were from the EU when in fact this percentage is 37%.3 This is probably because we tend not to notice immigrants so much when they resemble us more closely. And this matters because, according to the Eurobarometer, while 58% of EU citizens have a perception of non-EU immigrants that is fairly or very negative, this figure falls to some extent in the case of EU immigrants, standing at 36%. Such bias is even greater in the case of relatively recent phenomena such as political refugees: according to the «Humanitarian Index» study in 2016, the Germans and French believed they had accepted five times more Syrian refugees than had really been the case.

So if our perception of the migratory phenomenon is misguided, what is the reality? With regard to the first bias identified, namely the volume or total number of immigrants, the actual situation is much more moderate: in 2014, for the OECD countries as a whole, the number of immigrants born outside their country of residence accounted for approximately 13% of the population. Moreover the variation in this figure has been very gradual in spite of the sharp ups and downs in the cycles of the advanced economies over the last few years: in 2000 the share was 10%. Logically this trend for the OECD as a whole hides considerable disparity between countries. Spain’s share in 2014, for example, was 13.2%, a figure similar to Germany’s 13.3% and the 13.4% in the US but a long way from Switzerland’s 28.9% or 28.5% in Australia, at the higher end of the sample, or the figure of 0.8% in Mexico and 1.7% in Japan at the lower end. There is also a difference in the speed with which the current level of immigrants has been reached: in the period 2000-2014, while Spain saw an 8.4 pps increase in its proportion of immigrants, in Israel the ratio fell by 8.6 pps. In fact, the rate of change in relative immigration is one of the factors which the literature has identified as the reason for the concern or anxiety voiced by public opinion regarding the immigration phenomenon, concerns which could, in turn, be fuelling the bias in perception.4

The second error in perception, mentioned above, focuses on the category or type of migrant, especially those we might call «non-traditional», such as those given asylum for humanitarian reasons. In 2014, and as has been the case over the last few years, the main type of immigrant entering OECD countries were those known as «family migrants», accounting for one third of all new immigrants.5 The second category are immigrants from countries with agreements to allow the free movement of people (a situation that mostly affects European countries, whether they are in the EU or not). These two categories account for close to two thirds of the inflows of immigrants in OECD countries. The third type, at a notable distance from the other two, are immigrants looking for work. Even lower are the numbers of immigrants for humanitarian reasons and those known as «workers’ relatives».6

These figures therefore reveal a bias that could be related to composition; i.e. the difference between the type of immigrants actually registered and that perceived. A significant proportion of immigrants (especially those coming under the category of the European free movement of people) probably tend to be perceived as more similar to the inhabitants of their host countries so the bias that occurs is, as we have seen, one of underestimating their share. New categories, however, which tend to be widely reported in the media, such as humanitarian refugees, are significantly overestimated and there is also a tendency to think this is a recent phenomenon when, in fact, such immigration was already a relatively recurrent feature in the period of 2008-2014.

These two biases, namely in level and composition, are not merely academic curiosities. One way or another, people’s perceptions affect the quality of community life, the possibilities of integration and immigration policies (for a review of these, see the article «Immigration policies: not only entering but also integrating» in this Dossier). It is therefore easier (o rather, less difficult) to design appropriate policies if economic agents are aware of the real situation of immigration. Moreover future trends suggest that, in the advanced countries, population growth will largely equate with growth through immigration.

According to the United Nations, between 2015 and 2050 the natural growth in the population (births minus deaths) of higher income countries will be approximately 20 million people, while the contribution made by net immigration will be 90 million; in other words 82% of the growth in population will come from immigration. However, we should not forget that, in the advanced countries, the share of immigrants out of the total population will rise from a figure in the order of 13% in 2015 to 18% by 2050. A significant change but by no means a Copernican Revolution for the composition of advanced societies.

In spite of everything, and given this projection, it is important for the migratory phenomenon to at least be perceived in realistic terms and not through myths or rumours. The sociologist Auguste Comte has been attributed the phrase «demography is destiny». To paraphrase, and considering such projections, immigration is the future for many advanced societies and, to prepare themselves, they would be better off starting with an analysis based on fact. We trust that this Dossier, which contains articles exploring migratory policies («Immigration policies: not only entering but also integrating»), the economic effects of immigration («The economic impact of immigration») and some aspects of the Spanish case («The migratory phenomenon in Spain: from immigration to emigration?») may serve as our own grain of sand in building up a more realistic image of a situation that is of the utmost importance, both now and in the future.

1. Ipsos MORI (2014), Survey «Perceptions are not reality: Things the world gets wrong».

2. For example, in a previous survey, namely Transatlantic Trends (2010), the perceived proportion of immigrants to the total population was 25% in Italy compared with 7% in reality, and 39% in the US compared with the real figure of 14%.

5. Family migrations are those where a citizen resident in the country, whether a national or foreigner, is joined by their direct relatives such as their wife and children.

6. This category includes cases, for example, of families getting back together when some of the members have previously immigrated to the host country. 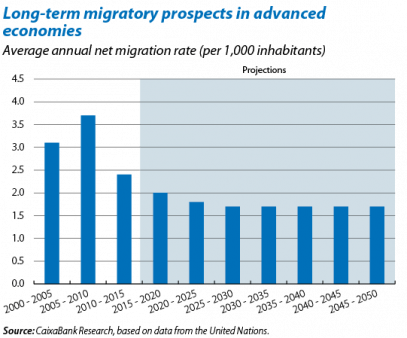