What is the current state of Portugal’s demographics?

• The Portuguese population has declined in the last decade as a result of negative natural and migration balances. Recently, however, the improvement in the migration balance has mitigated the decline in the resident population.

• The ageing of the population and the low birth rate represent major challenges for the coming years, with far-reaching economic, financial and social impacts.

• In this context, migration flows will take on a particular importance.

In Portugal, like in other developed countries, population trends have changed considerably in recent decades. Between 2009 and 2018, the country’s resident population decreased by around 297,000 people, falling to 10.3 million.

This reduction was due to a negative natural balance and, most notably, a negative migration balance.1 In fact, between 2011 and 2016 there was both a significant departure of Portuguese people and a reduction in new arrivals, reflecting how sensitive migration flows are to the business cycle.2 In particular, this period was marked by an adverse economic environment, with the sovereign debt crisis in 2011-2012. For instance, between 2011 and 2013, the Portuguese economy contracted by 6.8% and unemployment reached record levels.3 However, since 2017 net migration has turned positive again, coinciding with the consolidation of Portugal’s economic recovery and helping to moderate the decline in the Portuguese population.

The natural balance, meanwhile, turned negative in 2009 and has remained so to date, driven by the ageing of the population and a low birth rate. In fact, the evolution of the population pyramid indicates that the Portuguese population is suffering from so-called “double demographic ageing”: as shown in the second chart, the rise in average life expectancy is reflected in the widening of the top of the pyramid, while low birth rates contribute to narrowing the pyramid’s base. In particular, average life expectancy has risen from 73.9 years in the early 1990s to 80.8 years in 2018. At the same time, the portion of the population over the age of 65 reached 21.8%.4 Furthermore, this evolution has not been accompanied by an increase in births. In fact, Portugal has one of the lowest birth rates in the EU,5 standing at 8.5% in 2018. The only countries below Portugal are Italy (7.3%), Spain (7.9%) and Greece (8.1%). Thus, the average age of the population resident in Portugal has risen from 33.9 years in 1990 to 44.8 years today, slightly above the EU average (43.1 years).

As such, these dynamics have led to a deterioration in the dependency rate: in 2018, the dependent population (under the age of 15 and older than 65) was equivalent to 55.1% of the working-age population (from 15 to 64 years of age), compared to 50.6% in the early 1990s. In addition, the deterioration of this rate has accentuated in recent years, particularly since 2010, as migration flows have become negative.

What are the characteristics of Portugal’s migration flows?

To better understand the evolution of migration flows since 2008, we must break them down into immigrant inflows and emigrant outflows. As shown in the third chart, this split indicates that the deterioration in the migration balance between 2011 and 2013 was mainly due to an increase in emigration, which surged as a result of the difficulties endured by the Portuguese labour market in those years. Starting in 2014, however, the flow of departures decreased while immigrant inflows increased, both due to Portuguese people returning and due to an increase in foreign immigrants.

In socio-demographic terms, two characteristics of Portugal’s emigrants and immigrants stand out: their age profile and their level of education. In terms of age, the migratory movements are concentrated in working-age individuals, particularly among those aged between 20 and 49. In the case of Portuguese emigrants, this age group represented over 75% of all departures in the past six years,7 and in the case of immigrants, slightly over 60%. As for their level of education, the dynamics between emigrants and immigrants are slightly different and prove unfavourable for Portugal. This is because, in net terms, there have been more departures of individuals with a higher education than arrivals (51,000 departures in the past four years versus 24,000 arrivals). In addition, there has been an increase in the relative weight of emigrants with secondary studies (ISCED8 3-4: 26.9% in 2017) and a reduction in low-skilled emigrants (ISCED 0-2: 42.5%). The percentage of people with higher education (ISCED 5-8: 28.7%) who decide to emigrate, meanwhile, has remained practically unchanged. By occupation, the biggest groups are those with training in engineering (20% of departures) and in management and legal sciences (35%).

Among immigrants, there have been changes in the motives behind why people choose Portugal as their country of residence: in particular, there has been a reduction in people whose motivation is work-related and an increase in those whose primary reason has to do with education or retirement. In recent years, there has also been a significant increase in immigrants motivated by entrepreneurial and independent professional activities, suggesting that those who migrate to Portugal have higher qualifications (a trend that could mitigate the departures among the qualified population).

In short, the demographic outlook for the Portuguese population does not look favourable. The forecasts indicate that the ageing and the decline of the resident population will continue over the coming decades, and it is estimated that the population resident in Portugal will stand at approximately 8 million in 2070, with 35.7% over the age of 65. The ageing of Portugal’s population poses some challenges, including a reduction in savings and in the labour force, the detrimental impact on the economy’s growth potential and an increase in the number of pensions and in expenditure on healthcare. In this context, migratory flows take on a particular important role in order to mitigate these effects, especially in terms of attracting immigrants. For this reason, in recent years some steps have been taken in this area, especially in expediting the process for acquiring Portuguese nationality, granting residence visas and offering tax benefits, with a view to attracting higher-skilled professionals to Portugal.

5. Number of births during a given period of time, usually a calendar year, in relation to the average population in that period. 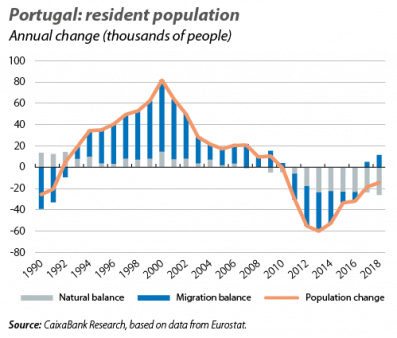 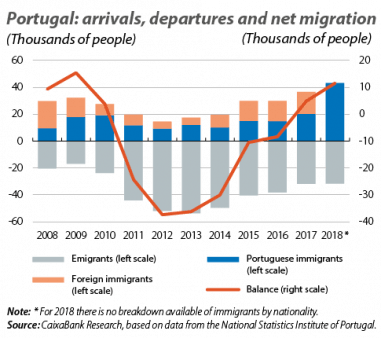 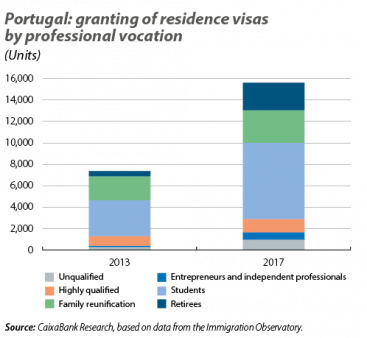