The climate challenge: the future of the planet at stake

Climate change is a highly topical issue at present: you can see so for yourself every day in the media. Moreover, a huge number of studies have been undertaken on the topic, indicating not only its popularity but also the magnitude of the problem. Indeed, 37% of Spaniards consider it to be the greatest threat facing the world.1 In this article we will try to determine the scope of this phenomenon.

The phenomenon: scientific and climate evidence

This is a Dossier written entirely by economists. However, we need to take off our economist hat for a moment to briefly explain the scientific basis behind global warming. So, without further ado, let’s start. The Earth absorbs half of the radiation that reaches it from the Sun, before emitting it in the form of infrared radiation. A portion of this radiation continues out into space, but another portion is reflected back towards the Earth by greenhouse gases in the atmosphere (mainly carbon dioxide, but also methane and nitrogen oxide). This is what is known as the «greenhouse effect». In theory, this is a positive effect: without it, the Earth’s average temperature would be 30°C lower than it is, too cold for most of our ecosystems to survive. The problem lies in the fact that, since the mid-20th century, the concentration of carbon dioxide and methane in the atmosphere has grown, causing an excessive amount of infrared radiation to «bounce back» to the Earth’s surface and, therefore, a rise in temperatures. For instance, the amount of carbon dioxide in the atmosphere increased by 14.2% between 1765 and 1965, but it has soared by 27.5% between 1965 and the present day.2

What lies behind these changes? In a somewhat provocative manner, we could say that there has always been climate change: the climate changes continuously and, in fact, up until the industrial era (which began in around 1750), our planet had warmed up and cooled down in alternating cycles of around 100,000 years in length.3 What has changed in recent decades is that human activity (for instance, through the use of fossil fuels, intensive farming, etc.) has substantially increased emissions and the subsequent concentration of greenhouse gases in the atmosphere, which has led to a 1°C temperature rise compared to 1750.4 Therefore, rather than talk about climate change, it would make sense to talk about anthropogenic climate change (caused by human beings).

The scientific community supports the idea that climate change is anthropogenic – there is scientific consensus5 on this point. One of the most significant studies was undertaken in 2011 by the physicists from the prestigious Federal Polytechnic School of Zurich,6 Mark Huber and Reto Knutti. In this study, using a relatively simple model of the Earth’s energy flows, they estimated that at least three-quarters of the climate change experienced over the past 60 years is due to human activity. In contrast, the natural factors that influence temperature changes (such as the Earth’s orbit, the level of solar radiation and volcanic activity, among others) could only explain a small portion of the global warming we have experienced in recent decades (see second chart).

Climate change scenarios: what does the future hold?

We must bear in mind that the average temperature on Earth will continue to rise in the coming years, even if greenhouse gas emissions were to stabilise today. Therefore, the Earth will continue to heat up in the short term. This is partly as a result of current and recent emissions (the accumulation of gases in the atmosphere is crucial, as the majority of them take years to disappear) and partly due to the thermal inertia of the oceans (between 30% and 40% of carbon emissions in recent decades have dissolved into oceans, rivers and lakes, increasing their temperature and acidity).

The Intergovernmental Panel on Climate Change (IPCC), the group of scientists who advise the UN on this matter, has proposed four scenarios of average temperature rises by 2100 compared to pre-industrial levels (remember that, to date, there has already been a 1ºC rise).

To do this, they have made projections of the levels of greenhouse gas emissions based on the policies adopted and, using historical data, have translated these levels into temperature rises. The four scenarios put forward are as follows:

• Scenario 1. Business as usual: if no action is taken at all and emissions continue to increase at the current rate, the temperature rise would be between 4°C and 5°C.

• Scenario 2. Insufficient energy transition: if the current policies to mitigate emissions growth continue to be applied, the rise would be between 3°C and 4°C.

• Scenario 3. Intermediate energy transition: the temperature rise would be 2ºC (or slightly below) if the policies set out in the Paris Agreement were implemented in full.7

• Scenario 4. Ambitious energy transition: the temperature rise would be 1.5ºC.

What do these figures and scenarios mean? They are simply benchmarks that can help us to glimpse what the future living and environmental conditions on the planet will be like depending on the policies that are adopted today. Scientists agree that any temperature rise in excess of 2°C would lead to serious climate risks, such as a significant sea level rise, drought and more violent and frequent weather events (cyclones, hurricanes, floods, etc.).

This does not mean that the consequences of staying below 2ºC are harmless: according to the IPCC, there is a significant difference between limiting the temperature rise to 1.5°C (the target sought by the Paris agreement) and to 2.0ºC. For example, in the first case, the number of people who would experience difficulties in accessing safe drinking water would be cut in half.

The great challenge for governments and regulators lies in the fact that limiting the rise to 1.5°C by 2100 requires highly ambitious measures8 with a significant impact on the productive model and on the vast majority of economic sectors: for example, the goal could be achieved by cutting carbon emissions in half by 2030 and, from 2050, bringing emissions down to zero. These efforts could be supplemented with other measures (such as large-scale reforestation) and the development of technologies that allow a portion of the greenhouse gases we emit to be captured and stored. The technologies in question are yet to emerge, which is why it is essential that public policies support the efforts of the private sector and of the scientific community to develop them. In any case, the sooner action is taken, the less disruption this transition will involve. After all, in view of the scope of the phenomenon, such a transition is inevitable.

3. These fluctuations would be caused by small changes in the Earth’s rotation axis. See J. Clark et al. (2009). «The Last Glacial Maximum». Science.

4. Specifically, it is estimated that 72% of the greenhouse gas emissions generated by human activity come from energy production; 11% from agriculture; 6% from industrial processes not related to energy, and 6% from land-use change and forestry.

7. The 2015 Paris Agreement set the goal of keeping the increase in the planet’s temperature below 2°C above pre-industrial levels and to pursue efforts to limit the increase to 1.5ºC. This goal requires a significant global reduction in greenhouse gas emissions, something that will only be possible in the context of an energy transition that reduces the demand for energy and creates a shift towards cleaner energies.

8. See the article «How to act in the face of climate change? Actions and policies to mitigate it» in this same Dossier for an in-depth analysis of specific measures. 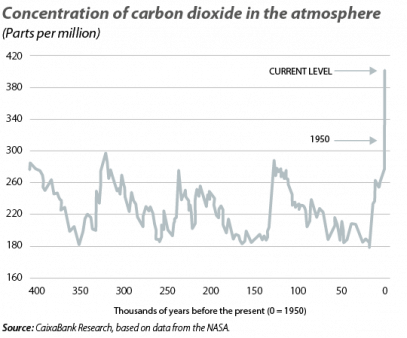 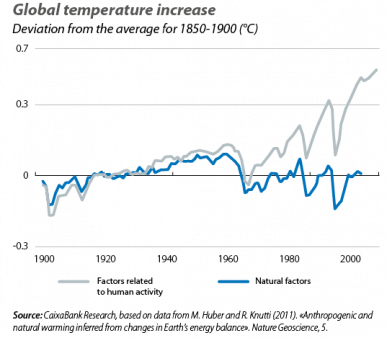 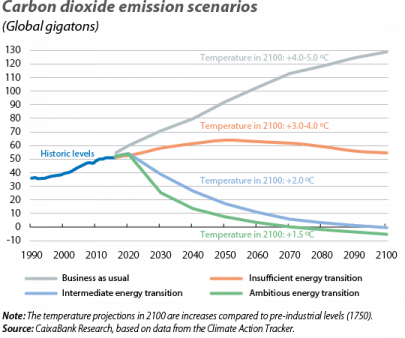