The COVID-19 outbreak has transformed our way of life and shaken our economy in an unimaginable way. New ways of producing and doing commerce may emerge, and remote working may spread, which could help to accelerate the economic transition towards a more sustainable and environmentally friendly system. These changes, which are nonetheless the result of a situation that we would prefer not to have endured, could have positive environmental consequences (for instance, in the short term we have already seen a decline in greenhouse gas emissions during the lockdown).1 However, the green transition will only succeed if we truly acknowledge that it is a collective challenge that requires decisive action from regulators, businesses and households.

A pandemic like that of COVID-19 and climate change share one thing in common: the magnitude of their impact, both in economic and humanitarian terms. So while our efforts must now focus on combating the effects of COVID-19, we must not forget that climate change is one of the biggest challenges we must face in the 21st century. In fact, green policies can also help us to emerge stronger from the current crisis. This is also the belief of the European Commission, which intends to give environmental policies a prominent role in its COVID-19 Recovery Plan.

Greenhouse gas emissions pose an unprecedented challenge: for every year they increase, the subsequent reductions have to be more stringent if the objectives of the Paris Agreement are to be achieved.2 In 2010, it was estimated that global greenhouse gas emissions would need to be reduced by 3.3% per annum up until 2030 in order to limit the temperature rise to 1.5ºC by 2050. However, in 2020 the annual average reduction required is now 7.6%, a sign that we are not on the right track. Similarly, if we were to take into account the maximum total greenhouse gas emissions that we would need to emit up until 2050 in order to achieve the targets, at the current rate we would exhaust that limit some time between 2029 and 2033, and we would need to reduce net emissions to zero from then on.3

This is therefore a global challenge that affects the entire economy, although it has a greater impact on sectors with a more intensive use of fossil fuels: the energy sector, which emits around 40% of total CO₂ emissions, and transportation and industry, which emit around 20% each.4 These sectors will need to adapt their productive model in order to meet the new environmental standards, which will lead to significant changes in the way we live and produce.

The EU has reduced its greenhouse gas emissions, but there is still a long way to go

Some figures serve to illustrate the magnitude of the problem and the EU’s position on how to address it. Today, the G20 economies are responsible for 77% of global greenhouse gas emissions, and the top five emitters (in this order, China, the US, the EU-27, India and Russia) account for 61% of global emissions. However, if greenhouse gas emissions are allocated according to where they are consumed (rather than where they are produced), then the US and the EU increase their share, while China’s share decreases. Thus, in 2016, EU emissions calculated on the basis of consumption were 15% higher than if we look at their production, while in China they were 11% lower.5

That said, the weight of EU emissions as a proportion of the total emissions has fallen from 12% at the beginning of the century to 7.5% in 2018, although it remains the third biggest emitter. It is also the region with the lowest level of energy intensity – i.e. energy consumed per unit of GDP – in the world. This is an important milestone, given that achieving the objectives set by environmental policy will depend on our ability to reduce energy intensity, making it a key variable. Indeed, between 1990 and 2018, EU GDP grew by 61%, while its greenhouse gas emissions fell by 20%.

These are not the only encouraging figures: the so-called «green economy»6 is playing a growing role in the EU; the sector’s gross value added grew by 4.1% in 2017, brining it to 288 billion euros and contributing 2.2% of the region’s GDP. At the same time, the EU stands out in the field of innovation and ranks first in the number of environmental technology patents;7 in 2016, 26% of patents were registered in the EU, as we can see in the second chart.

The use of renewable energies has also been one of the hallmarks of EU action on climate issues. In fact, it is important to note that more than 32% of the electricity generated in the Union is produced from renewable sources, compared to 23% worldwide, and that almost 19% of the final energy consumption occurs through renewable energy (1% globally), bringing us closer to the target set for 2030 (32%).

Despite these advances and the heightened awareness about climate change in the EU, the data reveal insufficient action. In fact, we run the risk of missing the targets set for 2030 and 2050.8 This is because the measures taken to date do not appear to be sufficient to achieve the milestone of cutting greenhouse gas emissions by 40% by 2030 compared to 1990 levels. For this reason, giving a new green impetus to the European economy is essential, and the European Commission intends to do just that through its so-called Green Deal.9

In short, if we consider the progress achieved to date and the leading position that the EU has assumed in the fight against climate change, the region is called upon to play an important role in the global context to encourage cooperation and global action in order to combat the climate emergency. Clearly, the EU will not be able to solve the problem alone, but taking decisive and well-designed measures will serve as a stimulus and a valuable example of good practice for the rest of the world. We cannot deny that this transition involves enormous challenges and that the transformation will be more costly for some economies, regions and social groups than for others. This will require us to manage the transition accordingly in order to avoid social and regional disparities, which could end up jeopardising the energy transition itself. Once we overcome the COVID-19 outbreak and economic activity has been reactivated, it will be the right time to intensify our efforts in building a more environmentally friendly economy, prioritising public investment in more sustainable sectors and promoting green financing.

2. The 2015 Paris Agreement set the goal of limiting the temperature rise to 2°C above pre-industrial levels and to pursue efforts to limit the increase to 1.5ºC. See the article «The climate challenge: the future of the planet at stake» in the Dossier of the MR11/2019 for more information on the relationship between increased greenhouse gas emissions and the occurrence of extreme climate phenomena.

4. According to data from the IEA.

6. According to Eurostat, this includes the environmental goods and services sector: products created for environmental protection (for the prevention, reduction or elimination of pollution or other forms of environmental degradation) or resource management.

7. According to OECD data (including patents registered in at least two intellectual property institutes), in 2016, the highest number of patents registered in the EU were in the fields of environmental management and technologies for mitigating climate change in the generation, transmission or distribution of energy and transportation.

9. See the article «The European Green Deal, between the desirable and the feasible» in this same Dossier. 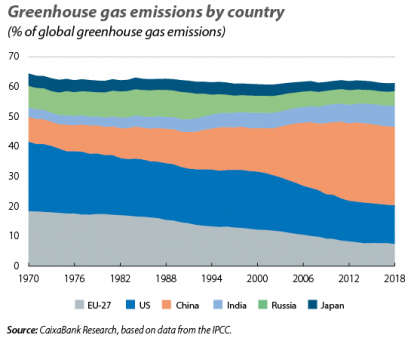 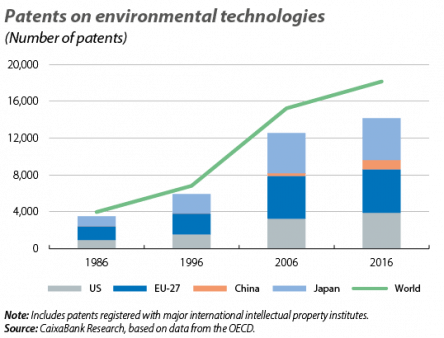