Climate change: consequences and difficulties to mitigate it

We are currently beginning to witness the first consequences of climate change. As an example, it is well known that the rise in temperature is causing the polar ice caps to retreat. However, this could be just the tip of the iceberg if we do not take appropriate action. Below, we consider some of the potential future consequences of climate change, as well as what factors are preventing more progress from being made in the transition towards a greener economy and one that is ultimately more sustainable in the long term.

The costs of climate change

Climatologists agree that the most likely effects of global warming include the melting of glaciers and the polar ice caps, sea-level rise and more frequent and extreme weather-related disasters.1

However, accurately estimating the extent of these effects is very difficult, since this will depend on the degree to which economies and the population adapt to the new environment. What seems clear is that the rise in temperature will increase the severity and frequency of extreme events (or «long tail» events, to use the economic jargon). These are weather events that are not only unpredictable but also have serious consequences, such as cyclones, hurricanes and floods, and the likelihood of them occurring will increase significantly if the rise in greenhouse gases is left unchecked.

It is also very difficult to accurately estimate the economic impact of climate change. The main obstacles in doing so are as follows:

• The aforementioned difficulty in determining the increased frequency of extreme weather events.

• The close relationship between economic development and climate. An increase in temperature affects economies in different ways, such as through the economic damage caused by extreme weather events. However, changes in the productive model and in economic growth influence the level of carbon emissions, which ends up influencing how the temperature changes.

• We do not know the scope of technological change and the extent to which it will be able to mitigate these risks (for instance, research is being conducted into new ways of absorbing a portion of our carbon emissions, besides reforestation and increasing green spaces).

• How do we evaluate the economic gains and losses over the next 100 years? The so-called «discount rate», which seeks to measure current generations’ solidarity with future generations, is very difficult to estimate since it depends on the preferences of society as a whole, which can change over time.

• The energy transition will generate transition costs for many sectors that will be at risk of falling behind if they fail to adapt to an economy with lower greenhouse gas emissions. Depending on the compensatory measures that are implemented and the speed of the energy transition, companies will be more or less affected.

Do all these pitfalls mean that it is not worth assessing the potential economic impact of climate change in years to come? Nothing could be further from the truth. Better understanding and quantifying the impact of climate change on the basis of a cost-benefit analysis is key, for instance, in order to estimate the damage caused by emitting an additional ton of carbon into the atmosphere. According to the prestigious University of Chicago economist Michael Greenstone, this is «the most important number you’ve never heard of», and having a decent estimate would help us all to better understand the consequences of our decisions.

In fact, in recent years, analyses of the economic impact of climate change have improved significantly. A prime example is the article by three Stanford University professors published in 2018 in the journal Nature. In this article, they estimate that2 in a scenario in which current energy policies continue to be applied, there will be a reduction in global GDP of between 15% and 25% in 2100 compared to a scenario in which temperatures remain at their current levels. The reduction would be even greater than 25% if no action were taken whatsoever (a business as usual scenario).3 Furthermore, they estimate that going from a scenario with a 2°C temperature rise to one of 1.5ºC would benefit 90% of the global population in 2100, and would save more than 18 trillion euros (an amount equivalent to one quarter of today’s global GDP). One of the criticism this study has received is that it does not account for the transition costs that cutting emissions would entail. All in all, based on other studies, the authors conclude that these costs would be far less than the benefits of limiting global warming. In addition, they argue that their estimate of the economic impact of climate change is a conservative one, as their analysis excludes the impact of extreme weather events.

We would also like to emphasise that the impact of climate change affects all aspects of life, not just the economic one. The study on mortality led by Greenstone in 2018 is particularly alarming.4 According to this study, in a business as usual scenario, climate change would be responsible for 85 deaths per 100,000 inhabitants in 2100 (today, all types of cancer cause 125 deaths per 100,000 inhabitants). This figure was estimated taking into account the costs of humans adapting to the new temperatures and their economic capacity to deal with them. It is also interesting to note that the impact would be negative in areas with high temperatures, and positive in areas with low temperatures,5 as shown in the chart. Finally, the World Bank estimates that, if we do not take measures, in 2050 the effects of climate change could force more than 140 million people to emigrate, especially from the poorest countries.6

Curbing climate change: where it is going wrong?

If the problem is so severe, why have the appropriate decisions not been taken yet? In this section, we describe some of the factors that make it difficult for more decisive progress to be made in tackling climate change:

First of all, in order for households, businesses and the public sector to take the right decisions, they should have as much information as possible. Only then will they be able to correctly assess the costs and benefits of their decisions.

At the start of the industrial revolution, little or nothing was known about the impact of greenhouse gases. At present, although major progress has been made in scientific research on the causes of climate change and its consequences for nature and human activity, there is still a significant portion of the population that is unaware of the consequences of their decisions. Educating people about the origins of climate change and its potential consequences remains essential.

• Difficulties in factoring in externalities7

The greenhouse gas emissions that are generated when a company produces something, or when a household consumes it, has costs for society as a whole which that person or company does not usually take into consideration. This is what, in economic jargon, is referred to as a negative externality.

In contrast, investment in sustainable technologies and energy generates positive externalities. That is to say, besides the direct economic return provided by the investment itself, other benefits are generated for society as a whole (such as cleaner air), which investors do not always take into account as they do not receive any financial reward for them.

For these reasons, it is desirable to implement mechanisms that make it easier for all of us, both individuals and companies, to take into consideration the indirect effects of our decisions on the climate.

«Why should I pollute less when, if everyone else is already doing so, I can benefit anyway?». If we all think this way, greenhouse gas emissions will not be reduced.

Even taking into account all the available information, and being aware of the costs of some decisions, households, companies and regulators sometimes take decisions that have a detrimental impact on the climate in the medium and long term, as they act thinking only in the short term.

In short, climate change caused by human activity is a crucial challenge for our species that affects us in a multitude of areas. There are no excuses for not addressing it with the seriousness and determination that it deserves. There is not a second to lose.

1. We have already felt its effects: we need look no further than the heat wave that claimed 70,000 victims in Europe in 2003, which is attributable to climate change according to K. Trenberth, J. Fasullo and T. Shepherd (2015). «Attribution of climate extreme events». Nature Climate Change 5.8: 725-730.

3. To calculate these figures, they use a discount rate (3%) that is neither too high nor too low.

5. This is the average effect, i.e. without taking into account the possibility of long tail events occurring.

7. In general, externalities are consequences that an economic activity imposes on the rest of society and which are not properly reflected in their price. 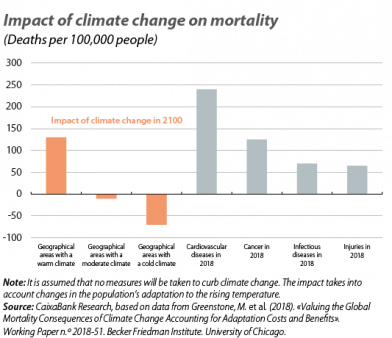