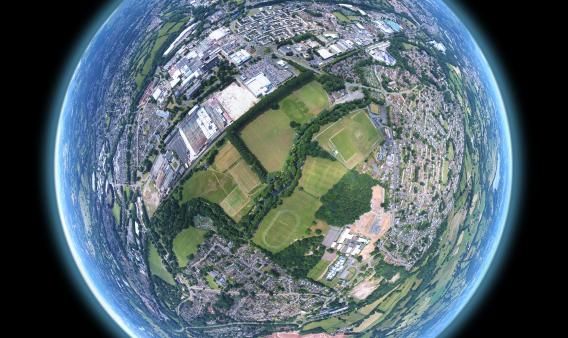 The pandemic of 2020 could become a major turning point of this century. This is a century marked by radical change and transformation, as demonstrated by such phenomena as the 2008 financial crisis, the emergence of the digital economy, the consolidation of China as one of the new pillars of the global economy, and... the acceleration of climate change with the resulting heightened environmental awareness.

Furthermore, the decade that is now beginning will probably also mark a turning point in geopolitics and international trade. The escalation of trade tensions between China and the US is reshaping the battlefield. As such, all the indicators suggest that over the coming years the epicentre of the discussion will not be on trade deficits, but rather will shift towards issues such as the intensity of greenhouse gas emissions and technological decoupling. Since the onset of the health crisis generated by the pandemic, the need for shorter and more resilient global value chains has already been raised. In this regard, governments could legislate to promote the local production of certain goods and services that are considered essential, such as essential healthcare equipment. The pandemic could thus reinforce protectionism at the global level, creating the political and social consensuses needed for the creation of more self-sufficient energy networks, industries and distribution chains. The EU has already given this movement a name: strategic autonomy. This change in trade relations will coincide with one of the great challenges of our time: climate change. As we will see in this article, the fight against climate change and the goal of reaching 2050 with zero net greenhouse gas emissions could serve as an important impetus to rewrite the rules of international trade and geopolitics. 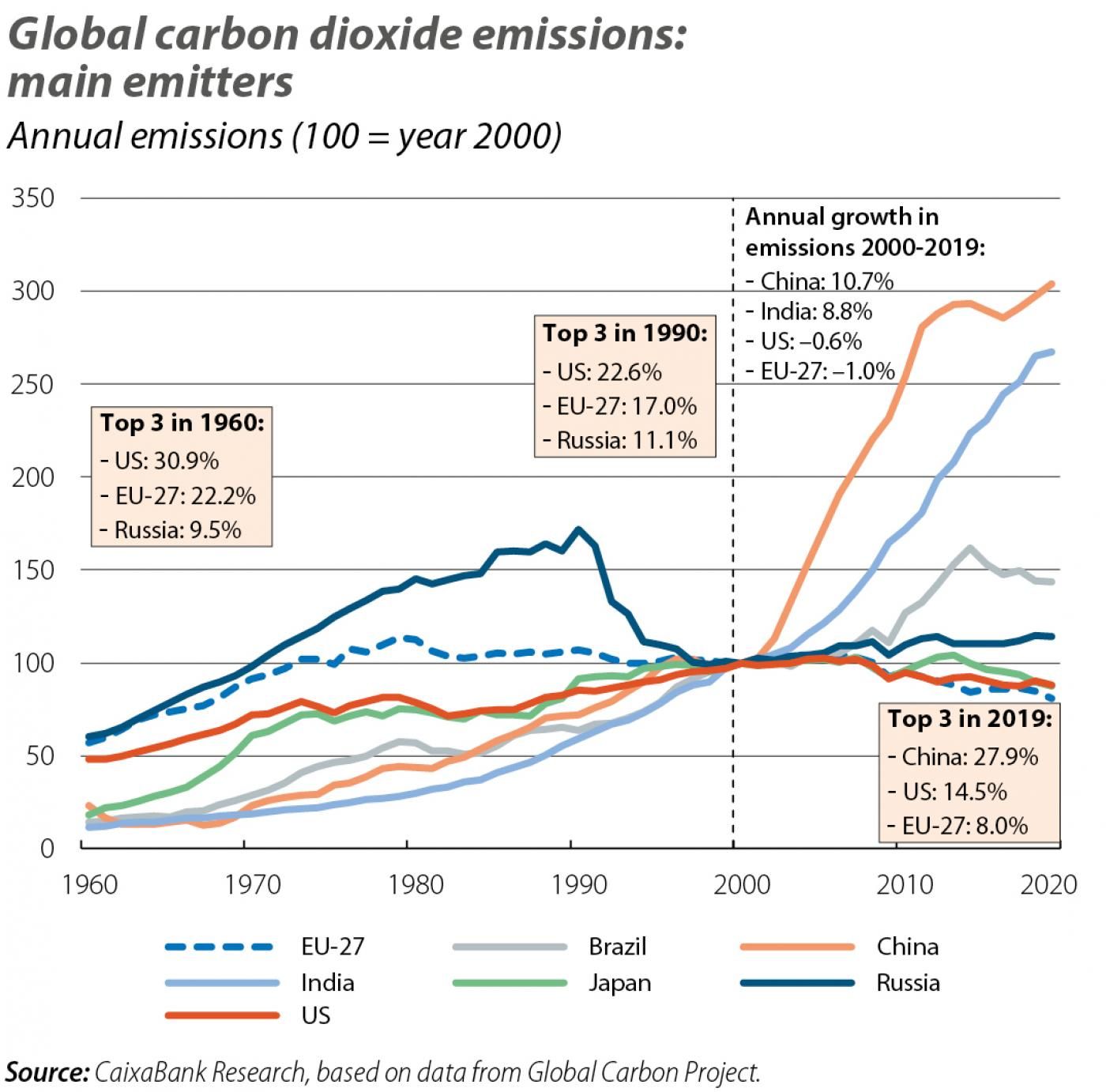 Green international trade: ambitious targets but time for a transition

How can an international trading system be designed to be efficient, fair and to help achieve the targets outlined in the Paris Agreement? On the side of the major pollutants, there are hopeful signs: according to a report by the Global Energy Monitor (GEM), the installed capacity for coal-fired power production fell in the first half of 2020 for the first time in history. China, the country responsible for the highest share of emissions, has set itself the goal of achieving climate neutrality by 2060 and tripling its installed wind and solar power capacity over the next decade. Among the world’s largest producers of oil and natural gas, meanwhile, the vast majority have announced plans this year to significantly reduce their emissions over the coming decades. Finally, US President-elect Joe Biden has reaffirmed his commitment to the Paris Agreement, his desire for the US to achieve climate neutrality by 2050 and his intention to implement a two-trillion-dollar investment plan over the next few years, with a strong focus on clean energies and sectors that are key to the green transition.

Even so, we are still in a transitional phase, and international cooperation mechanisms have been greatly weakened in recent years, which is expected to make it even harder for the good intentions announced to date to be turned into tangible and effective policies. In this context, effort must be put into devising instruments that help align each country’s incentives with the global emission reduction targets, prevent environmental free-riding and establish good practices. One of these policies is cross-border emission taxes. Let’s see what it is all about.

Carbon border taxes: the tariffs of the 21st century?

The course set by the EU and other major emitters for the coming decades in the field of emission reductions will lead to a significant rise in the levies on those emissions.1 This could contribute to the relocation of the most polluting industries from «green» countries or regions to «brown» destinations, where they can gain a competitive advantage thanks to the lower price of emissions and export to other destinations from there. This phenomenon is known as carbon leakage. This has sparked a debate on how to avoid such leakage, with proposals such as a European mechanism for adjusting emissions at the border. This would essentially amount to a cross-border tax that is charged on the emission content of imports of goods and services, in a manner similar to the emission taxes to be imposed at the European level.2

Although its final design may vary, the plans outlined in the context of the European Green Deal seem to favour a cross-border adjustment mechanism targeted at specific sectors, with the aim of responding to two of the main challenges of its implementation: its administrative complexity and its legality within the framework of the World Trade Organization (WTO).3 However, the fact that this plan only focuses on certain sectors could generate a significant substitution effect. This could result in an increase in imports of those sectors that are not taxed by this adjustment mechanism (especially products that are not subject to it) but which incorporate raw materials from sectors that are subject to the tax (an example of this problem in another context unrelated to climate change has occurred in the US, where very high tariffs have been imposed on metal, but nail imports were not taxed). Thus, a mechanism limited to certain sectors, despite its symbolic value, is likely to end up with limited effectiveness. Hence the importance of ensuring that this mechanism can be applied across most sectors and that the carbon footprint of all products and their components can be traced.

The implementation of such a mechanism is not only technically difficult, but also complex to implement at the political level. On the one hand, the countries hardest hit by this tax will tend to be emerging ones, as they generally have a lower capacity to produce clean energy. Therefore, there will be a debate over whether the revenues from this mechanism should be dedicated to strictly European projects (in which case it could be perceived as a protectionist tool) or to providing aid to the countries from which the taxed products originate in order to help them produce those products in a cleaner manner. On the other hand, this mechanism could lead to a domino effect of environmental protectionism if the countries subject to these taxes decide to retaliate.4

In the face of these problems, the European authorities will have to tread very carefully in order to develop an emission adjustment mechanism that is effective but avoids provoking major geopolitical tensions. Only in that case will such a mechanism succeed in setting an example for the world’s other economies to accelerate the implementation of good environmental practices everywhere.

Green international trade: there are alternatives but no panaceas

What are the alternatives to the border adjustment mechanism? One possibility is international coordination for the introduction of emission caps allocated by industry or country, and taxes on excess emissions similar to the EU’s emission trading system. These international coordination tools are expected to gain traction on both sides of the Atlantic, following the election of President-elect Joe Biden, as a way to apply pressure on other countries (particularly China and India) to bolster their efforts in the energy transition. A complementary alternative, which would require a greater degree of international cooperation than that shown to date, would be the creation of «climate clubs»,5 that is, trade agreements among countries that have agreed on a certain international price on their emissions. These clubs would have two essential characteristics: on the one hand, their members would commit to setting the agreed common price on their emissions rather than negotiating national emission reductions. On the other hand, countries that decide not to participate in such clubs would be penalised, for instance through cross-border quotas, tariffs and adjustment mechanisms. These «climate clubs» could thus constitute a multilateral forum that could prove very useful for aligning the emission reduction incentive structures of the Paris Agreement’s signatory countries. Moreover, the costs of not being part of the club would increase with their size, as countries that choose not to participate would lose the opportunity to gain unhindered access to the markets of the club’s members.

In this context, and in a particularly volatile geopolitical environment, the importance of reaffirming and strengthening the leadership of supranational institutions is particularly significant, as it would enable ambitious and lasting policies to be adopted. Currently, shorter-term policies – such as border adjustment mechanisms – are being proposed to fill the gap left by the weakening of international cooperation in recent years. However, looking ahead to the future, new steps will have to be taken. In the case of the WTO, the main sentinel of international trade, trade disputes are likely to be rekindled over the coming years as a result of the rise in protectionism, the rethinking of global supply chains, disparate environmental targets and latent geopolitical tensions. If the negotiations for a post-Brexit trade agreement between the United Kingdom and the EU have proven to be thorny, designing new international trade mechanisms to promote environmental protection will be no less so. Commitment to the environment from all parties, in a spirit of global cooperation, will be key.