How to act in the face of climate change? Actions and policies to mitigate it

In recent years, the need for swift action on climate change has become clear, to the point that we refer to this phenomenon as a «climate emergency».1 How can we address this situation? In this article, we propose measures to mitigate its effects, or at least to try. This is a collective challenge which must encompass regulators, businesses and households.

Regulation plays a key role in the fight against climate change. As such, the measures taken by the regulator must be implemented as quickly as possible and must be part of a clear and stable framework. The longer they take to be implemented, the more costly adaptation will be for businesses and households.

One of the proposals that generates the most consensus among economists is the introduction of mechanisms that make greenhouse gas emissions more expensive,2 modifying as required the incentives for businesses when they invest and produce, and those for households when they consume. Ideally, these mechanisms should enable the cost to the environment of emitting greenhouse gasses to be properly reflected. Furthermore, the revenues that would be generated could be used to compensate consumers for the rise in prices of carbon-intensive goods, as well as to invest in new low-emission infrastructure or to support technological innovations.

However, determining the price of emissions is no trivial task. Some estimates suggest that, in order to comply with the 2015 Paris Agreement, the price on carbon should lie between 36 and 72 euros per ton of CO2 in 2020, and between 45 and 90 euros in 2030, varying in each economy according to their characteristics.3 In addition, the IMF estimates that with a carbon price that gradually rises to 68 euros per ton by 2030 in G-20 countries, global warming could be kept below 2°C.4 Nevertheless, according to data from the World Bank, currently only 20% of greenhouse gas emissions are taxed, so the average global price of emitting 1 ton of CO2 is only 1.8 euros.

There are two mechanisms for increasing the cost of greenhouse gas emissions:

• Emissions market. In this system, the regulator sets a limit on the total number of tons of CO2 that can be emitted per year and region. Then, within this established limit, companies receive or buy emission rights which they can trade between one another according to their needs. The limit decreases each year, giving companies an incentive to emit less CO2 and to invest in more environmentally sustainable technologies. Currently, the biggest emissions market in the world is in the EU: the European Trading System (ETS) was one of the first emissions markets and regulates 45% of greenhouse gas emissions in the region. Under this system, some emission rights are distributed free of charge (a percentage that decreases year after year). Meanwhile, as can be seen in the chart, the final price determined by supply and demand has been somewhat volatile.

• Emissions tax. The regulator sets a price on greenhouse gas emissions, which gradually increases (instead of a quantity that decreases, as in the case of the emissions market). In this way, with a future price escalation laid down from the start, companies can properly plan how to invest in new technologies in the most efficient way.

However, setting a price on emissions involves some challenges that the regulator must take into consideration:

• Carbon leakage. The climate challenge is global and knows no borders. If there is no international coordination and carbon emissions are more expensive in some countries than in others, this will undermine the effectiveness of the measures taken since companies could relocate their production centres if the impact on their competitiveness were too high. For this reason, in the absence of international coordination, various economists have argued that it would be a good idea to establish tariffs on imports of carbon-intensive products (to compete on equal terms in the domestic market), while subsidising exporting companies (so that they can compete in international markets).5

• Political backlash. With the increase in the price of carbon-intensive products, some vulnerable groups (such as low-income households or the transport sector) could be more adversely affected than the rest of society and end up strongly opposing such policies, as occurred with the yellow vests movement in France.6 In particular, according to estimates by the IMF, a carbon price of 68 euros would increase the cost of energy consumption by around 45%, and petrol by around 15%,7 hence the need for the energy transition to be fair and as inclusive as possible. Two solutions have been proposed to solve this potential problem:

■ Directly compensating the groups most adversely affected by this policy using the revenues collected from the price of emissions.

■ Return the revenues collected to all citizens of the region equally, in the form of a lump-sum rebate.8

According to the World Bank,9 there are currently 57 initiatives in the world that increase the cost of carbon emissions (either through a greenhouse gas emissions market or an emissions tax). Among them, Sweden’s carbon tax stands out, with a price of 115 euros per ton and covering 40% of the country’s CO2 emissions (bearing in mind that emissions already included in the EU ETS are exempt). This measure was introduced in 1995 and has contributed to cutting CO2 emissions by 25% since then.10

All in all, the price of emissions is neither the only solution nor is it sufficient to mitigate the effects of climate change. In order to be effective, it must be accompanied by other measures that offer sustainable alternatives to both consumers and businesses (improvements in the energy efficiency of infrastructure, that of urban and inter-urban mobility, or subsidies for research into new technologies, among others).

The climate challenge concerns the whole of society, and it is crucial that the private sector also plays a very active role. Thus, it is essential that companies take on a commitment to the planet’s sustainability. This requires them to incorporate into their mission the interests of all stakeholders that contribute to the creation of business value: customers, shareholders, employees and society as a whole.

In this regard, a wide range of indicators besides financial profits are becoming increasingly important. These include the SDGs (sustainable development goals), a set out 17 goals adopted by the United Nations to eradicate poverty, protect the planet and ensure prosperity for all. Of particular use for analysing the specific areas in which businesses can contribute to the sustainability of the planet is the information provided by the so-called Observatorio ODS (SDG Observatory), which evaluates Spanish companies’ compliance with the SDGs. With regard to environmental issues, the Observatory’s second report11 analyses the progress made by Spanish listed companies in 2017 in areas such as the use of renewable energy, water  consumption, waste management, emissions reporting and levels, and environmental policies. The report notes an improvement compared to the previous year, but points out that there is still a long way to go: in 2017, 34% of listed companies reported the use of renewable energies in their annual reports (26% in 2016) and 35% claimed to have reduced greenhouse gas emissions (20% in 2016).

It is also important to emphasise that in no way is this commitment to sustainability at odds with companies’ financial profits: those that undertake to take measures in line with the SDGs can benefit, in the short term, from greater customer loyalty, greater commitment from their employees and lower costs of capital.12 On the other hand, there is a reputational risk for companies that are perceived as being part of the problem and are not taking decisive action to curb climate change. In the medium and long term, those that have been unable to adapt or to innovate in this direction could face serious difficulties in the new regulatory environment or when faced with rejection from increasingly conscientious consumers.

Households are key to the acceleration of these changes in the regulatory and business environment. If citizens do not demand stricter regulations on greenhouse gas emissions, it will be more difficult for policy makers to set a suitable price that taxes them in order to (at least) comply with the Paris Agreement. Furthermore, without a change in consumer preferences for carbon-intensive products, companies that produce them will not be so incentivised to innovate in greener technologies.

In order for this change in individuals’ preferences to occur, the impediments to the fight against climate change set out in this dossier must be overcome. For instance, if we do not know what damage our actions cause to the environment, we will not be able to make the right decisions. In addition, we may often think that individual actions against climate change are insufficient – what we economists refer to as the «free-rider problem». To some extent this is true, since, for example, one person using energy-efficient household appliances is not much use if the rest of the world is using much more polluting appliances. However, the actions that one takes have the ability to influence those around us and can end up creating virtuous circles.

In short, we must keep in mind that in the fight against climate change there will be winners and losers, and that latter will need to be compensated. But we must also keep in mind that if it is not addressed, there will not be any winners at all. After all, the climate emergency is precisely that - an emergency - which is why we must act as soon as possible and in the most fair and ambitious way we can.

1. See the first two articles of this Dossier, setting out the causes and consequences of climate change.

2. Although all greenhouse gas emissions contribute to climate change, the rise in temperature caused by man is mainly the result of CO2 emissions. See IPCC (2013). «Climate Change 2013: The Physical Science Basis».

5. This measure can be found in a letter signed in 2019 by 27 Nobel Prize winners and 4 former presidents of the US Federal Reserve Bank, among others. C.L. Council (2019). «Economists’ Statement on Carbon Dividends». Wall Street Journal.

6. See the article «Political instability in Europe: France in the eye of the storm» from the MR04/2019. 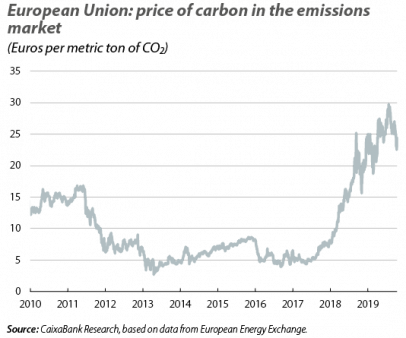 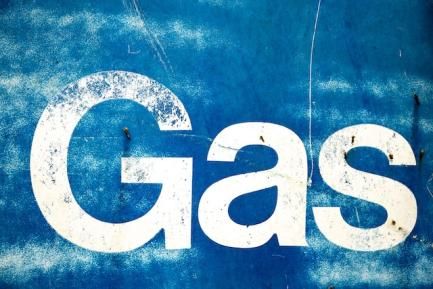 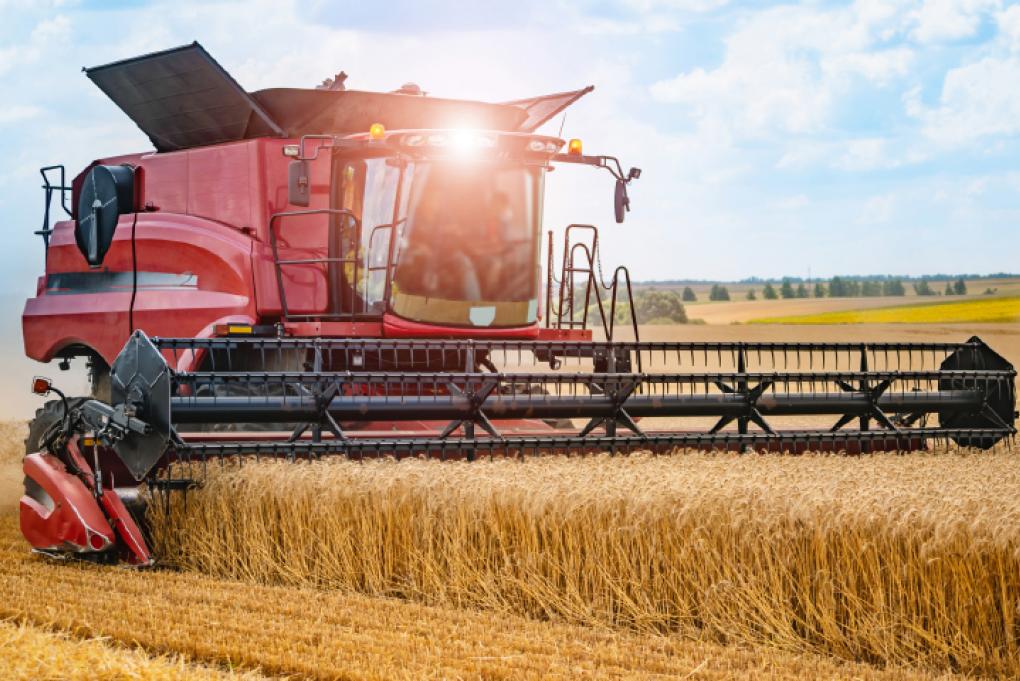