Climate change, the green transition and the financial sector 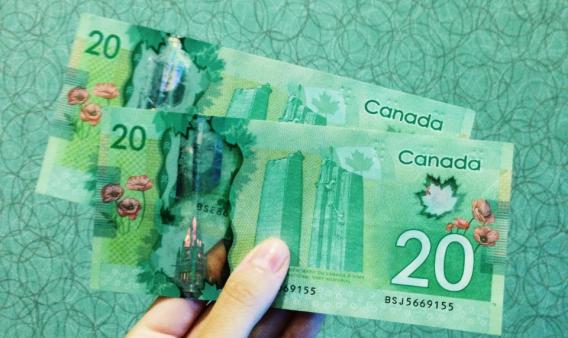 • Physical risks, which stem from the direct effects of climate change, such as more frequent and extreme weather events and changes in the balance of ecosystems. These risks can manifest themselves suddenly (in the form of specific events, such as floods or storms) or gradually (as changes in weather patterns). In addition, these risks can lead to substantial increases both in the costs to address them and in the physical damage caused to the productive capacity of businesses (such as disruptions in their supply chain) and to household assets. Thus, virtually all sectors of the economy face the physical risks.

• Transition risks, linked to the transformation towards a low-carbon economy. Transition risks derive from regulatory changes (such as strict limits on emissions of carbon dioxide and other greenhouse gases)2 and technological changes3 (such as fully electric transport systems) required to achieve the goal of decarbonisation. Furthermore, the green transition could entail demand-side changes resulting from evolving consumer preferences and behaviour as they become more sensitive to environmental issues. All this will generate new opportunities, but it could also affect the performance of various economic sectors and the market valuation of a wide range of assets, with the financial implications this entails.4

For the financial sector, the impact of the risks associated with climate change could materialise through the traditional risks facing the sector. In particular, both the physical and the transition risks could have an impact in terms of credit, reputational, operational and market risks.6 For instance, extreme weather events can cause significant damage to assets and reduce borrowers’ payment capacity. For the banking sector, this can lead to an increase in the likelihood of default and a loss of value of loan collateral. In addition, credit risk can arise from exposures to companies with business models that are not aligned with the transition towards a low-carbon economy. Another example would be the physical damage caused to buildings by extreme weather events, which would pose an operational risk.

In this context, the need to assess and integrate climate risks into the set of risks that can affect the financial sector is shared by both the financial institutions that make up the sector and the regulators and supervisors. However, this is no easy task, since the very nature of climate risks makes them difficult to identify, measure and assess:

• First of all, the physical risks associated with climate change are difficult to discern. Specifically, their occurrence and magnitude are unpredictable, they have wide-ranging consequences (affecting multiple sectors, lines of business and geographical areas), and the time horizon over which they can materialise is long, unknown and largely exceeds the traditional decision-making horizon used by the various economic players. In contrast, the effects of climate change depend on the actions that are taken today, and it is precisely this temporary mismatch between action and impact (the so-called «tragedy of the horizon») that makes climate risks difficult to discern.7

• Thirdly, it is difficult to measure the impact of the physical and transition risks on the financial sector. This is partly due to the lack of corporate information (in the public domain) on the financial impact of climate risks and their consideration at the strategic level. For instance, there is no standardised taxonomy that clearly separates activities that are considered green9 from those that are not, and that clarifies precisely how green each activity is. There are also currently no common standards for the disclosure of climate-related financial information. This is relevant because it hinders transparency, the establishment of clear benchmarks and the evaluation of questions such as which companies can make the most of the opportunities offered by a low-carbon economy, or which companies are best prepared to cope with climate-related risks. This lack of information can also lead to an incorrect valuation of certain assets and to an inefficient allocation of capital. In this context, initiatives to establish common standards are very welcome. These include the recommendations by the Task Force for Climate-related Financial Disclosures (TCFD), an initiative of the Financial Stability Board for the corporate disclosure of financial risks associated with climate change. All in all, to date, climate risk disclosure initiatives have been limited in scope or have been developed on a voluntary basis.10

• Finally, the lack of appropriate methodologies makes it difficult to assess climate risks and to incorporate them into internal risk models. Risk analysis requires scenarios to be designed, the economic impact to be analysed and the financial risks in each scenario to be assessed. Assessing climate risks also requires a much longer forecasting and analysis horizon than usual.11 In addition, estimating the impact that climate change will have on the economy as a whole, and on the financial sector in particular, is a complex task, particularly when the historical data are a poor indicator for what will happen in the future. For instance, the risk associated with the green transition has not been seen before, which makes it difficult to estimate using current tools. Similarly, there is insufficient data and scientific knowledge to assess the physical impact that could have a global temperature rise well above what has been historically observed.12 Finally, scenario analysis is a relatively new and complex practice, and many of the climate scenarios (such as those developed by the IPCC)13 are intended for use in policy-making and scientific research, rather than in corporate and financial analyses.

In short, climate change is a global challenge (in terms of both its causes and its consequences), which requires global solutions and a high degree of coordination between all economic players and sectors. In this context, an early, gradual, orderly and fair transition towards a low-carbon economy is key to reducing the potential impact of climate risks on the economy as a whole, and on the financial sector in particular. It is also, therefore, important for the financial sector to have the necessary tools, methodologies and standards in order to properly assess and manage the financial risks associated with climate change. In this way, the sector will be able to contribute effectively to driving change.

2. The 2015 Paris Agreement, for instance, poses a transition risk driven by regulatory changes. In particular, the signatory countries agreed to limit global warming to below 2°C through a drastic reduction of greenhouse gas emissions. This will require regulatory measures and significant changes in industrial and energy policies, among other elements.

3. The technological risk is associated both with the speed and scale of new technologies and with the degree of transformation and disruption in the various sectors facing the irruption of these new technologies.

4. European Systemic Risk Board. «Too late, too sudden: Transition to a low-carbon economy and systemic risk». Reports of the Advisory Scientific Committee, nº 6.

6. The risk resulting from the behaviour of a class of assets or a market. Some examples include substantial and sudden changes to asset prices, which render some assets obsolete.

7. Bank of England (2015). Speech by Mark Carney. «Breaking the tragedy of the horizon – climate change and financial stability».

8. As an example, a belated recognition of the importance of controlling emissions could result in a sudden implementation of restrictions and regulations on the use of energy sources from fossil fuels playing catch-up.

9. The work by the European Commission to support future legislation on a Europe-wide sustainable taxonomy is a step in the right direction.

11. In general, financial regulatory frameworks tend to focus on risks to financial stability over the next 2-3 years, so they are not designed to capture unconventional risks over the long term.

12. Also see the article «The climate challenge: the future of the planet at stake» in this same Dossier. 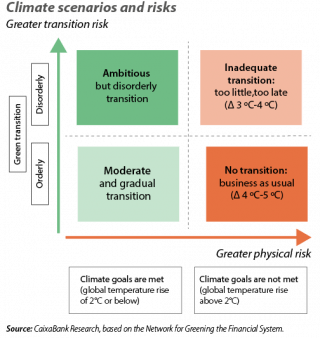