The EU’s objective of achieving carbon neutrality by 2050 raises an important question: do the benefits of the climate transition outweigh the costs? The European Commission and most governments are in no doubt, and not in vain: it is estimated that the climate transition will boost the EU’s GDP by 1.1% and employment by 0.5% in 2030 compared to a business-as-usual scenario (i.e. a scenario in which no measures are taken and emissions continue to grow at their current rate).1

Beyond the aggregate impact of the climate transition, it is undeniable that it will not be neutral and that some countries and sectors will win while others will lose. The most disadvantaged sectors will be the extractive industries and the highly energy-intensive sectors of industry, while others will be forced to transform their business model (the automotive, chemical and construction industries). As a consequence, countries where these sectors have a greater relative weight will also experience more difficulties in implementing the transition.2 The major challenge of economic policy will thus be to facilitate a transition that is as just and harmonious as possible, thereby preventing adverse political reactions, as happened in France with the revolt of the yellow vests.

European sectors and countries most affected by the climate transition

In the EU, the five countries that emit the most greenhouse gases are, in this order, Germany, France, Italy, Poland and Spain, responsible for 65% of the region’s total emissions.

To assess what the impact of the climate transition will be by country and which ones are best positioned to tackle the risks that the transition poses, we analysed the greenhouse gas emissions per euro of GDP. One particularly worrying result of this analysis is that the countries with the highest greenhouse gas emissions per euro of GDP are also the poorest (both if we measure poverty in terms of GDP per capita and if we use the poverty risk indicator),3 and they are dominated by Eastern European countries (see first chart). In general, these countries’ greenhouse gas emissions come mainly from the energy sector (in Poland, for example, this sector’s emissions account for over 40% of the total emissions generated by all economic activities, due to the use of coal). Spain and Portugal, on the other hand, are in a more favourable position. Thus, in order to reduce greenhouse gas emissions, it is the most polluting sectors4 that will have to undergo the biggest transformation over the coming years, and their relative weight in the gross value added of Eastern European countries is not insignificant, ranging from 11% in Lithuania to 21% in the case of the Czech Republic. Furthermore, the most polluting sectors also play a significant role in the labour market in these countries, since they employ between 9.7% of the working population in Estonia and 30.6% in Romania.

If we consider the effort that will be required within the EU to take on the transition, it is these countries that are most likely to suffer from the enormous challenges it entails. Nevertheless, they can also benefit from the transition: investing in the fight against climate change results in more innovative and resilient economies, as well as in the creation of better-quality and more productive jobs.5 However, one of the main mechanisms that will be used to reduce greenhouse gas emissions is to increase their cost through a carbon tax or a cap-and-trade scheme, such as the current EU Emissions Trading Scheme (EU ETS), which could cause energy costs to rise for a period of time.

Thus, the transition must be carefully managed so as to avoid social and regional disparities and to ensure that it is just and socially accepted by everyone. After all, we must remember that the positive effects of the transition will take some time to materialise, while the costs will be perceived much sooner. The relatively weaker position of Eastern Europe also poses a formidable challenge to the common European project; only a just transition will prevent a rise in Euroscepticism, which is already emerging in countries such as Hungary and Poland.

In this context, within the framework of the Green Deal, the EU presented the Just Transition Mechanism to help the regions, industries and workers affected by the climate transition. Its objectives will include, among others, training workers, improving energy efficiency in buildings, supporting the transition of companies to more environmentally friendly technologies and offering incentives for companies to invest in R&D. To finance this mechanism, in January 2020 the European Commission announced the creation of a Just Transition Fund (JTF) to cushion the socio-economic impact of the climate transition in the regions that will be hardest hit.

One problematic aspect of this transition fund is that its geographical allocation, in principle, is already pre-defined using somewhat generic and inflexible criteria. The allocation of the amount corresponding to each Member State would be based on certain specific criteria (largely linked to the carbon intensity of each state’s regions and the percentage of the workforce that works in industry and coal mining), while the final distribution of funds will depend on the approval of the various countries’ just transition territorial plans. Thus, half of the planned 40 billion euros would go to only four countries (8 billion to Poland, 5 billion to Germany, 4.4 billion to Romania and 3.4 billion to the Czech Republic), while Spain and Portugal would be allocated a very residual share (4.5% and 1.2% of the total, respectively).6 The expansion of this fund through the recovery plan and the tough negotiations that lie ahead offer a good opportunity to rethink the allocation criteria. On the one hand, part of this aid ought to be channelled to the sectors that will suffer the most from the COVID-19 epidemic. In this way, they could emerge better equipped to implement the transition and thus take full advantage of the benefits of the green economy, providing greater support to those economies with lower fiscal margins. On the other hand, with the uncertainty surrounding what impact the climate transition will have on employment and in the various geographical areas, it would be advisable to have a wide margin of discretion in the allocation of the funds in order to help the sectors and regions that are hardest hit, as it becomes possible to identify them more accurately with time.

Finally, one would expect the allocation of funds to be conditional on a serious evaluation of project results, rather than merely being linked to the general objectives outlined in the various Member States’ just transition territorial plans. After all, it is not simply a question of dedicating a reasonable amount of resources to achieve the just transition (although this is also important), but also one of designing very well-targeted programmes that maximise the productive use and positive effects of the resources employed.

Ultimately, a successful climate transition will need to be handled very carefully to avoid weakening the cohesion of the common European project and to ensure that no one is left behind. In the end, it is a question of justice: justice between generations, between countries and between social groups. This transition will undoubtedly bring benefits for all Europeans, but at the same time it will come with considerable costs, so it is important that it be as inclusive as possible. The European Commission has already outlined some ideas for designing mechanisms to help achieve this, and the policies included within the recovery plan represent a major qualitative leap forward. However, much remains to be done, and those responsible for designing the transition must strive to ensure that the unquestionable ambition of the Green Deal is accompanied by decisive measures to make the transition a just one. It is time to convert words into action.

1. For example, the impact on Latvia’s GDP will be almost +6%, but for Poland it will be residual. For further details, see Eurofound (2019). «Energy scenario: Employment implications of the Paris Climate Agreement».

3. According to data from the Energy Poverty Observatory, most Eastern European countries had a higher percentage of the population at risk of poverty than the EU average (23.5% in 2016), with Bulgaria (40.4%) and Romania (38.8%) topping the list.

4. All sectors that are carbon intensive. 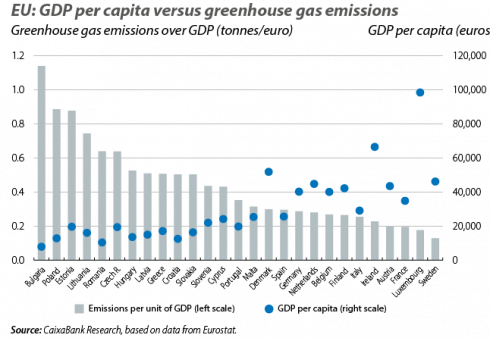