The digital economy: the challenge of measuring a technological revolution

The digital economy, or new economy, has come of age. The statistics which, as we shall see later, have so many caveats in capturing the extent of digitisation have at least been able to clearly detect the «core» of that process, i.e. the dissemination of information and communication technologies (ICT) since the mid-1990s. Yet there are still great difficulties in measuring the full extent of digitisation, primarily because part of it (perhaps most of it, in fact) falls outside traditional market exchanges and, consequently, is not captured in the conventional statistics. In this article, we will start by looking at the existing measures that are used to build these statistics, before offering some examples of additional measures. Considering these measures as a whole, it emerges a vision of the economy that is, perhaps, somewhat different to what we are used to: we are no doubt now living in a world with more growth, less inflation and greater well-being.

Measuring the «core»: the digital economy, in the strict sense of the term, represents less than 10% of the total economy

• In most countries with modern national statistics, starting in the mid-1990s an acceleration occurred in the diffusion of ICT, which constitutes the technological core of the digital economy.

• The most ambitious measurement effort to date was undertaken by a team of economists from the Bureau of Economic Analysis (BEA) in the US (Barefoot et al., 2018),1 which has developed a satellite set of the US national accounts that measures the digital economy.2 Its methodological approach, which probably anticipates what other statistical institutes will do in the future, is as follows:

￭They define the digital economy as that which integrates ICT infrastructure, the exchange of digital goods and services (e-commerce) and digital content.

￭Using information from the supply side of the economy, they use the 5,000 categories of goods and services and select 200 types of products and services that they consider to be digital.

￭Finally, they identify the sectors that produce these 200 goods and services and, for each of these sectors, they disentangle the part that is authentically digital from that which is conventional. Then, for each sector they estimate the value added and other economic measures of the digital segment.

• As a result of this exercise, Barefoot et al. (2018) obtained three key results:

￭If the sum of the digital segments from all sectors that provide digital goods and services are added together and compared with the conventional sectors, they concluded that, in 2016, the digital economy represented 7% of GDP in the US, ahead of sectors such as retail. This estimate is consistent with another by the IMF (2018), in which it is noted that, in many countries, the digital sector represents less than 10% of the value added, income or total employment3

If we correct for the undervaluation of digital goods and services, GDP growth could be significantly higher than conventional estimates suggest

• These figures, and in particular that of the weight of the digital sector in the economy as a whole, may seem somewhat disappointing to the readers, who perceive that the digital world pervades virtually all areas of the economy and society. The truth is that, despite these figures having the virtue of being methodologically rigorous and, therefore, the ability to be integrated into a national accounting system without any problems, they do not address the two essential problems for adequately measuring the digital economy:

￭Many digital transactions do not have an explicit market price.

￭Digital products and services are subject to rapid changes in quality and obsolescence, which makes it difficult to correctly calculate prices (for instance, is the first smartphone, which is not only worth many times more than any previously existing mobile phone but also has many times the performance, the same product as a conventional mobile phone? How should this, then, be incorporated into the basket of goods for determining the CPI?).

• In order to compensate for these limitations, at least partly, attempts have been made to calculate additional measures. At this point, let us explore two alternatives that seek to monetise that part of the digital economy that has no explicit price:

￭The first alternative is to treat «free» goods in the same way as free public services, i.e. valuing them at their cost of production. An example of such an approach is that used by Nakamura et al. (2018)4, which estimates the production costs of free digital media and other similar services based on the income generated from advertising and marketing (the idea is that, in fact, there is a transaction in which the consumer enjoys the free digital good in exchange for consuming the advertisements and marketing material). On this basis, this approach estimates that the annual GDP growth of the US in the period 2005-2015 would have been 0.10 pp higher than the conventional estimate.

￭The second major alternative is to simulate a hypothetical market and use it to try to infer the value of certain digital goods. This approach, which is frequently used in environmental economics to value intangible goods such as landscape, is that followed, among others, by Brynjolfsson and co-authors (2018).5 These authors conducted different experiments with a sample of users of digital applications in order to estimate how much they would be willing to pay for the free services they enjoyed, based on the value they extracted from using such applications. In the case of Facebook, for instance, it was estimated that it had added more than 1 decimal point per year to GDP growth between 2007 and 2013.

• As can be seen, these figures suggest that the undervaluation of digitisation in GDP could be significant, since even these exercises conducted for specific digital goods indicate a sizable impact.

Spain and Portugal have made progress in the dissemination of digitisation, but remain mid-way in the European ranking

• Among the approaches that seek to complement conventional measures, specific efforts are being made to better approximate the penetration rate of digitisation using new indicators. This approach highlights, for example, the work that has been done in the EU through the so-called digital economy and society index (DESI), which calculates a measure of the dissemination of digitisation by taking into consideration five factors: i) connectivity (25% weight in the total index), ii) human capital (25%), iii) internet use (15%), iv) integration of digital technology (20%) and v) digital public services (15%). One of the main virtues of the DESI is that it allows us to make an approximation for Spain and Portugal, two economies where there are few statistics on digitisation.

• Although the DESI covers only a relatively short period of time (2014-2018), some initial conclusions can nevertheless be drawn:

￭In 2018, Spain’s position in terms of digital distribution was slightly above the EU average, while that of Portugal was slightly below. In recent years, Spain has tended to climb the ranking, while Portugal has dropped down.

￭Based on the degree of economic development in Spain and Portugal, what ought to be their level of digital penetration? The data suggest that both Spain and Portugal have a level of digitisation that is slightly higher than would be expected for their level of income. In any case, both countries trail far behind the economies whose degree of digitisation is significantly higher than that of their relative prosperity, such as the Nordic countries and the Netherlands.

￭It is also important to identify relative strengths and weaknesses. Both countries stand higher in the ranking in the field of digital public services (Spain is the fourth best in the EU and Portugal, the ninth), while Spain also scores well in connectivity, an area which has seen a significant improvement over the past four years. The weakest point in the Iberian economies is human capital, although it should be recognised that Portugal and, to a lesser extent, Spain have improved since 2014.

In conclusion: we are living in a world of faster growth and lower inflation and, in this world, very few sectors will be unaffected by digital disruption

• If the measures of the digital sector were more accurate, it would probably become more clear that we are, in fact, in an economy with an effective growth that may be higher than that conventionally considered, which could be operating with levels of inflation below those published and which could also be generating higher well-being among consumers than previously thought.

• In this digital economy, the view we had just four years ago (Masllorens and Ruiz, 2015), in which we differentiated between «pure» sectors (that operate entirely in the digital world), «revolutionised» sectors (whose value chain has undergone a complete transformation due to digitisation) and «traditional» sectors (whose value chain has not undergone any significant disruption), may have lost much of its meaning: it is increasingly difficult to identify «traditional» sectors, and it will probably become even more so in the future.6

2. The satellite set of the national accounts are used to segregate specific areas or sectors and to reflect all the relevant economic information in them.

6. See the article «The digital economy: the global data revolution», in the Dossier of the MR07/2015. 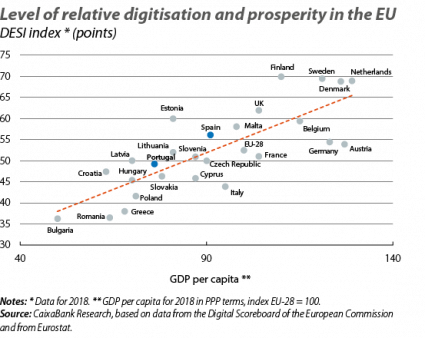