We explore the content of the structural reform agendas proposed by EU countries in the context of NGEU, whether they emanate from the Union itself or at the national level, to paint a picture of what kind of future Europe is pursuing. 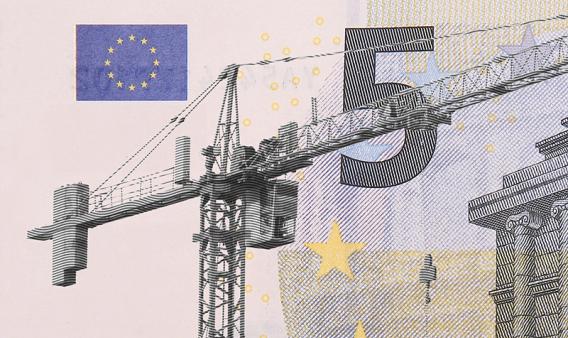 The launch of the Next Generation EU (NGEU) programme1 marks the opening of the clearest window of opportunity for reform in years, if not decades, in Spain and other EU countries. Part of this hope comes from the structural investments that are to be financed, but also key are the economic reforms associated with the programme. However, European countries’ agendas for reform do not stop at those initiated «from Brussels». In this article, we will explore the content of the structural reform agendas proposed by EU countries, whether they emanate from the Union itself or at the national level, and why they take the form that they do. This exercise will be very helpful in painting a picture of what kind of future Europe is pursuing.

Let us start with a simple question: what are structural reforms? If this question had been posed to economists at the beginning of the 1990s, the most likely answer would have been some variant of «any intervention in the economy that generates an increase in long-term growth». If we were to repeat the question two decades later, around 2010, in addition to the aforementioned efficiency objective, this consensus would probably have included a reference to such interventions helping to reduce inequality. Today, a third element would likely be added to the response, in that this growth should also be environmentally sustainable. Thus, the current view is that structural reforms are actions which allow the economy’s efficiency, equity and sustainability to be improved, thereby generating greater future well-being for more people.

This hypothetical question is intended to highlight a key element which is not always evident: the agenda of structural reforms is not set in stone, but rather depends on the particular moment in history at which they arise. The reason for this is twofold. Firstly, key trends affecting the economy vary, especially demography and technology. Secondly, political and social determining factors also evolve over time. Reforming a country which is in the midst of a demographic boom, the transition to industrialisation and is governed by an undemocratic regime (i.e. Spain’s development of the 1960s) is not the same as doing so in a country that is immersed in a digital revolution, is internationally open, has full democracy and a rapidly ageing population, like the Spain of today.

The factors determining the reform agenda

So what agenda do Spain and Portugal need right now? Although we sometimes tend to think in highly idiosyncratic terms, and in some respects this is justified, the fact is that most EU countries share a common core of necessary structural reforms. This is logical, since we have said that the economic trends and the political and social determining factors are similar, if not common, in most European countries. So what conditions should a European reform agenda be capable of responding to?

Firstly, not only should it facilitate adaptation, but it should also help to make the most of the opportunities presented by rapid technological change, as well as respond to the demands of the demographic transition, in particular the implications of population ageing and a longer life expectancy. Secondly, such an agenda should be tailored to a very specific international context, which derives from being part of the EU. Finally, the reforms would be adopted and implemented in a group of countries which share certain traits, such as full democracy, albeit with increasing polarisation, and a tendency to have little faith in the future, which translates into a certain defensive view of the broader European status quo.

Let us leave aside for the moment this latter element, which has a lot to do with how to implement proper reforms, the subject of the next article in the Dossier,2 and let us focus on the first two issues, which are related. Being a member of the EU means having a certain shared concept of what kind of society and economy we wish to achieve. What shape does it take? The NGEU documents themselves use a series of adjectives which clearly describe this vision: the EU of the future wishes to be green, digital, inclusive, cohesive (both territorially and socially), sustainable, resilient and future-oriented.

But being part of the EU also implies another requirement for the reforms which is not spelt out: they must serve to strengthen European integration and, in particular, its economic dimension. At the outset, the very existence of the NGEU instrument, insofar as it represents a leap in spending capacity and new financing options, is a federalising factor of the first order. Let us remember that, in order to fund the programme, there will be a significant increase in the EU budget’s own resources ceiling and European debt will be issued. Moreover, and as has happened in the past with other instruments, the fact that NGEU has a definite timetable does not mean that it cannot be reactivated in the future in the event of adverse economic shocks. Ultimately, NGEU will generate a legacy in the form of higher incomes and, potentially, higher future spending and investment capacity if necessary.

A second aspect that is not generally mentioned is that, when NGEU-related reforms are developed, the euro area will be able to function better as a monetary area. For instance, reducing labour-market rigidities will make it easier for responses to future shocks to take the form of wage reductions rather than job cuts, as is the case right now.3

The NGEU programme thus has a two-pronged objective: accelerating towards achieving a more efficient, equitable and sustainable future EU, and making a qualitative leap in European integration. This double hope, as we said earlier, pivots on two different axes, a series of investments with a structural purpose, on the one hand, and a series of structural reforms on the other. The latter differ from country to country, but they actually share a common conception (you guessed it – reflecting those similar economic, political and social determining factors already mentioned above). However, the structural reforms currently on the table are not just those proposed by Brussels; Member States also have their own strategies.

Inferring a model national reform agenda: from the specific to the common

It is therefore important to identify a shared model national agenda. This is not a simple exercise, and the ideal approach would be to infer a number of shared elements based on what advanced countries propose to do in terms of reforms. This «bottom-up» approach would give us the peace of mind of filtering out political, sectoral, social, cultural and national differences before reaching a shared vision.

This is precisely the methodology proposed by the OECD in a recent study, and it has the virtue of clarifying what is currently being considered in advanced societies on the topic of reform.4 The attached chart, which is drawn up using OECD data but groups the categories together in order to better define the different structural areas which the reforms aim to activate, is particularly illustrative. Almost three quarters of advanced countries’ structural reforms focus on four areas. The first, which is fundamental in any modern society, is the labour market. Only an efficient labour market can create the underlying conditions required to tackle inequality, at one of its key points. Here, countries propose a triple strategy: improving active policies, with particular emphasis on retraining older workers; increasing the participation of women and also minority groups; and finally, changes to the minimum wage. 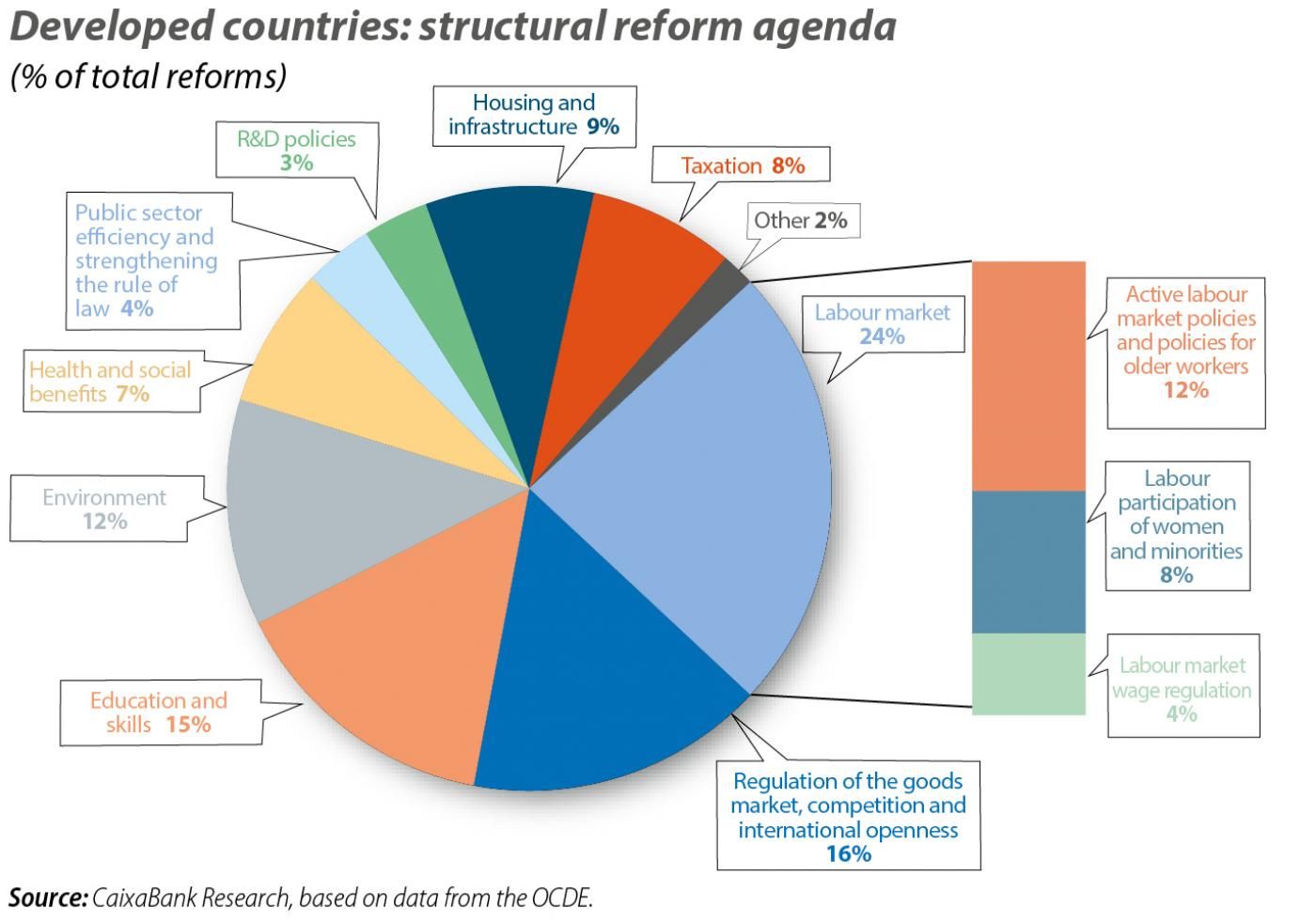 The second area is the core of any competitive economy: ensuring fair competition, both internally (product markets, competition policy) and externally (international openness). The third area is education, in the broad sense. Here they seek to boost the accumulation of human capital, a key factor for long-term growth, addressing both education in a more formal sense and the availability of key skills. Finally, the fourth priority area is the environment, which includes aspects such as cutting pollution, incorporating environmental externalities into the prices of goods and assets, and accelerating the rate of investment in green infrastructure. The remaining third of structural actions are related to areas such as health and social benefits (a reflection of the times we are living in, marked by the pandemic), public sector efficiency, improving institutional rules (i.e. the rule of law) and boosting research and innovation policy.

This is a reasonable menu which is a reflection of the times and addresses the objectives of the structural reforms that have been added in each period: efficiency, equity and sustainability. The challenge now is turning this prototype agenda into reality, which involves addressing the difficult part: how to reform. In other words, it is time to focus on the science and art of good reform. It is precisely this fundamental topic that will be the subject of our next article.