As a result of teleworking, remote education and the restrictions imposed on more social forms of entertainment, we have witnessed an increase in the consumption of technological goods compared to other categories of consumption. While in the first article of this Dossier we analysed the global demand for these goods during the pandemic and its possible persistence in the post-COVID world, in this article we focus on the case of Spain. 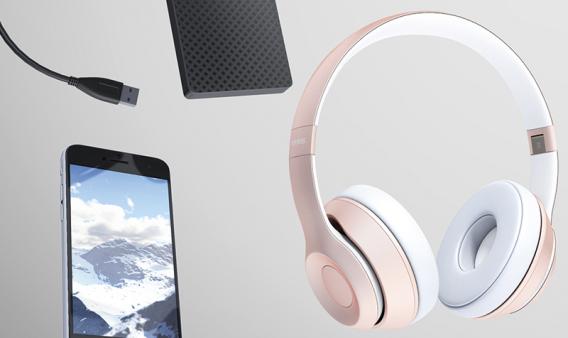 What our internal data reveal about Spanish consumers

How did Spanish consumers behave during the pandemic in terms of demand for technological goods? To answer this question, we analysed CaixaBank’s internal data on the sale of electronic goods (high-tech goods, in general), both in physical retail establishments and online, between 2018 and 2021.1 We then compared these data with what happened with the total consumption of goods (excluding essential goods).2 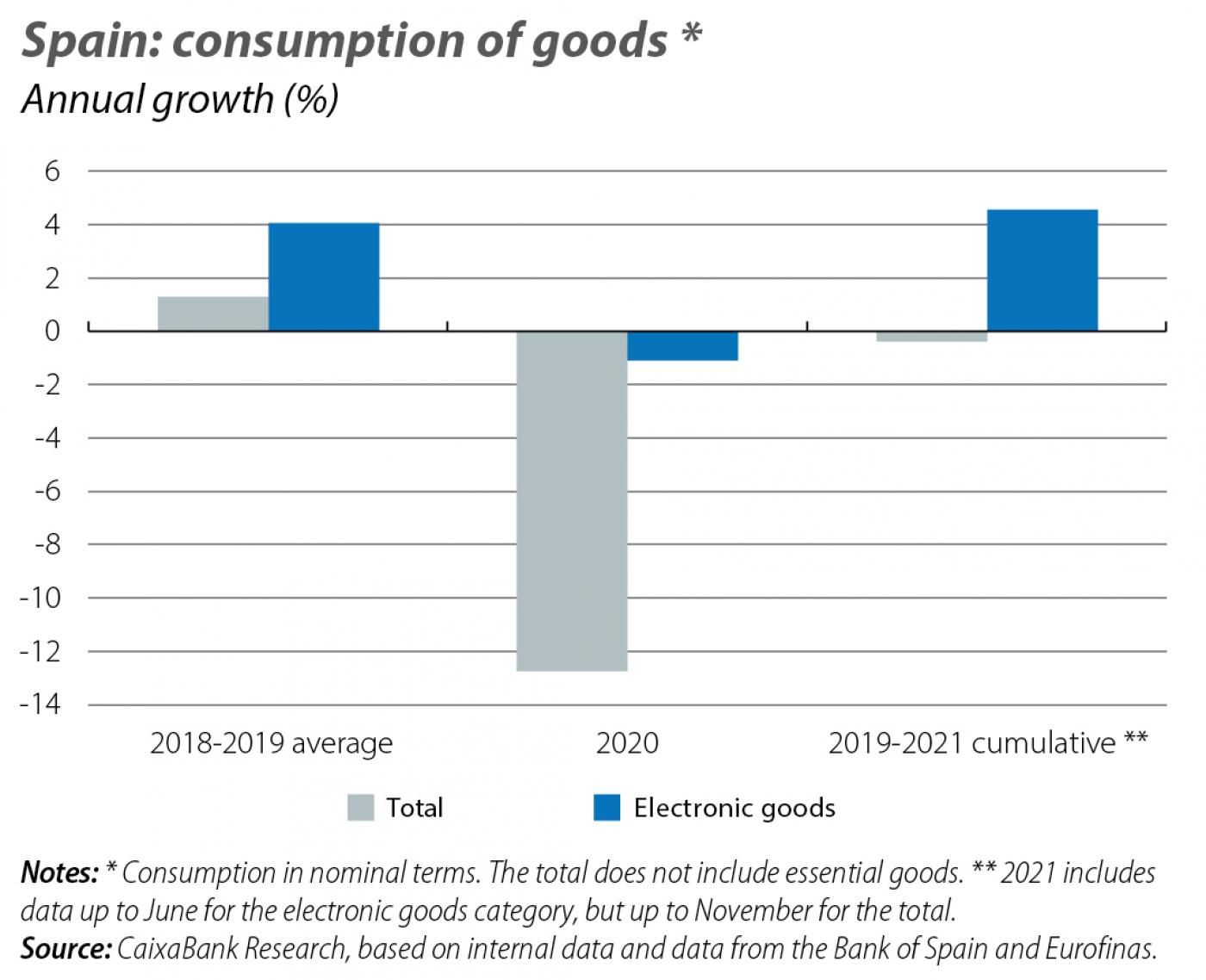 Indeed, this resistance shown by the consumption of technological goods at the height of the pandemic in 2020 is in line with what happened globally, especially in advanced countries, as we discussed in the first article of this same Dossier.3

Thus, as in the previous article, for the case of Spain the next question also focuses on the continuity of this greater demand for technological goods after the pandemic. While we cannot yet provide a definitive answer to this question, the 2021 data can offer us some clues. Unfortunately, the pattern in the consumption of electronic goods may have been more adversely affected than other goods by the disruptions in global value chains in the face of supply shortages since mid-2021. To reduce this effect, for the consumption of electronic goods we will stick to the data up to June 2021, while for the broader category of goods we will use the data available up to November 2021.4 What we see with our internal data sources is that the consumption of this type of goods in 2021 was still 5% above 2019 levels, unlike in the case of overall consumption (0.4% below, see first chart).

It is still too early to declare that Spanish consumers have shifted towards a greater consumption of technological goods. Nevertheless, there are some elements that could support such a change of trend. In the next section we discuss some of these elements for the specific case of Spain.

The future of teleworking and the impact of the NGEU programme

Beyond the boom shown by the recent data on the consumption of technological goods, there are other reasons which lead us to believe that this trend could last. These include the marked increase in teleworking and also some of the actions included in the European aid package (NGEU). 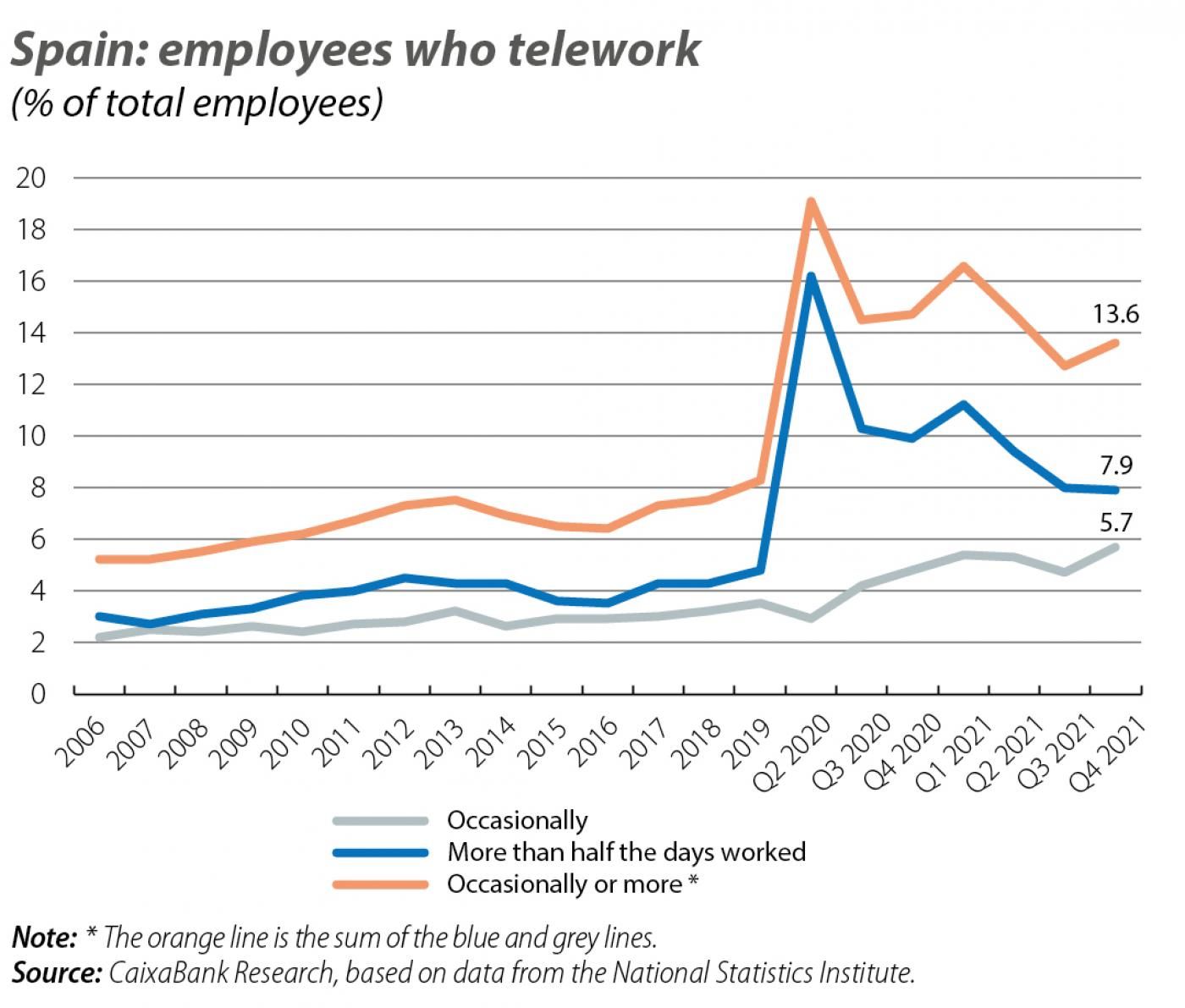 In Spain, the percentage of employed people who teleworked at least occasionally showed a slight upward trend between 2006 and 2019, but the arrival of the pandemic in Q2 2020 led to a paradigm shift: the percentage of employees who were teleworking more than doubled, and when we look within the subgroup of those teleworking more than half of the time, the figure tripled. Since then, the figure has closely followed the evolution of the pandemic, with reductions in teleworking when the epidemiological situation has improved and increases when it has deteriorated, but in any case it has remained largely above the levels of 2019. The latest available figure, for Q4 2021, shows a slight upturn due to the outbreak of the sixth wave of infections and is more than 60% above the 2019 level.

Thus, while the intensive use of teleworking at the height of the pandemic appears unlikely to continue in the future, the data seem to indicate that, in a situation of relative normality, teleworking could stabilise at higher levels than prior to the pandemic. Some indicators point in this direction. According to the Bank of Spain’s survey on the evolution of Spanish companies’ activities, 27% of companies plan to continue using teleworking in the next six months.5 This percentage is very similar to those obtained in the Q2 2021 edition of the survey (30%), as well as in the Q3 2021 edition (25%).6

Besides teleworking, there are other factors that could continue to drive the increased demand for technological goods in Spain. One such factor is the investments planned in the field of digitalisation under the umbrella of the NGEU funds. The Spanish plan includes investments related to digitalisation amounting to 19.6 billion euros.7 By their very nature, a considerable portion of these investments will be in technological goods. One example is the recently announced Strategic Project for Economic Recovery and Transformation (PERTE) relating to state-of-the-art healthcare. With a planned investment of 1,469 million euros between 2021 and 2023, among other things this project foresees the creation of a database for the healthcare system that will enable improvements in prevention, diagnosis, treatment, rehabilitation and health-related research. It also aims to boost the digital transformation of healthcare services by applying new digital technologies to all activities that involve communicating and dealing with citizens.

In short, Spain has not been an exception in the changing consumption patterns during the pandemic, with a clear bias toward technological goods. Testament to this is the resilience shown by the demand for this type of goods during 2020, as well as the relative buoyancy during 2021. Furthermore, while it is still early to talk about structural change, it is clear that trends like teleworking and investments such as those planned under the NGEU umbrella will provide some continuity to this shift in consumption patterns. 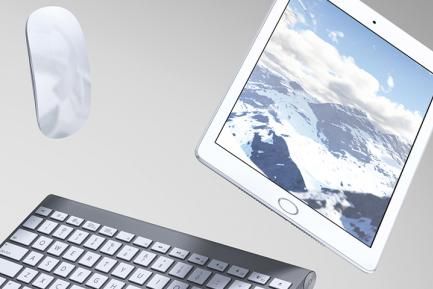 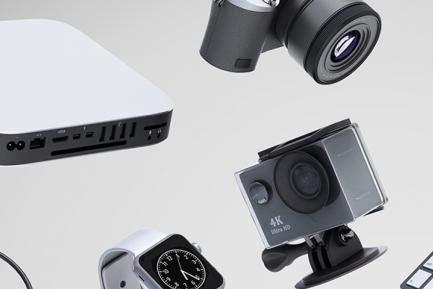