The last 30 years have borne witness to a sustained fall in interest rates across the major developed economies. As we have already analysed in previous Dossiers, this phenomenon ultimately reflects a decline in the so-called natural rate of interest. This is a key concept for monetary policy which has its origin in the Swedish economist Knut Wicksell.1

A key concept: the natural rate of interest

One of the problems with the natural rate of interest is that it is not directly observable in the data. However, it can be estimated using models and statistical techniques, although all these approaches are subject to a substantial degree of uncertainty.3 One of the most widely-used methodologies is that proposed by Holston et al. (2017).4 We reproduce their estimates in the chart, showing a sustained and widespread fall in interest rates across the major advanced economies.

Global factors affecting fluctuations and the decline in natural rates

The similarity in the pattern of the different interest rates shown in the chart has led many economists to conclude that there are global factors behind the fluctuations and the decline in natural rates.5 Indeed, the main causes that explain this sustained fall are the loss of buoyancy in productivity, the ageing of the population and the scarcity of safe-haven assets, phenomena that are observed across the board in the major advanced economies.

Beyond the global nature of these forces, it should also be borne in mind that national economies do not operate in isolation. The movements in interest rates and central banks’ decisions have immediate repercussions in the international financial markets. In this regard, globalisation turns them into a conveyor belt for transmitting the domestic trends of key economies, such as the US or the euro area, thereby influencing the actions of their central banks and determining their interest rates.

In fact, Rey (2015)6 documents the existence of global dynamics in capital flows, asset prices and credit growth, and encompasses them all with the term «global financial cycle». In addition, Rey shows that one of the determining factors for the global financial cycle is the monetary policy of economies such as the US and the euro area, which play a pivotal role in the international financial system. Thus, trends that affect these economies more than the rest of the world and which have applied downward pressure on their natural rates of interest (such as the ageing of the population and the loss of buoyancy in productivity) may have been transmitted to the rest of the world through the global financial cycle, eventually turning the decline in natural rates of interest into a global phenomenon.

3. See the article «The uncertainty surrounding the natural rate of interest» in this same Dossier for a discussion on the role and the causes of this uncertainty.

5. The consensus that the decline in interest rates is due, at least in part, to global factors is demonstrated by the large number of studies that state this to be the case. Among them, see K. Holston, T. Laubach and J.C. Williams (2017). «Measuring the natural rate of interest: International trends and determinants». Journal of International Economics, 108, S59-S75. Ò. Jordà and A.M. Taylor (2019). «Riders on the Storm» (No. w26262). National Bureau of Economic Research. R. Clarida (2019). «The global factor in neutral policy rates: Some implications for exchange rates, monetary policy, and policy coordination». International Finance, 22(1), 2-19. 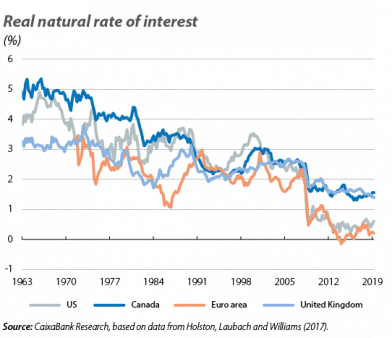