The Fed: from forward guidance to data-dependency

The Fed is about to close the chapter of unconventional measures. After having begun to reduce its balance sheet,1 the latest statements from the members of the Fed show their desire to leave the future evolution of interest rates more open. So, from now on, the future path of rates will be more uncertain and will depend to a greater extent on trends in the economic and financial indicators.

A history of unconventional communication

The use of communication as a monetary policy tool intensified following the outbreak of the financial crisis. With short-term interest rates at 0% and faced with no possibility to cut them further to offer even more accommodative financial conditions, the Fed decided to declare very explicitly its intention to keep them at very low levels for a long period of time. The objective: to change investors’ and savers’ long-term expectations, thereby further reducing long-term rates.

When the economic recovery began to settle, the Fed also used communication to actively manage expectations about the first reference rate hike. Furthermore, once rates began to rise, forward guidance continued to be a key tool for the central bank, which began to indicate quite clearly the speed at which it would increase interest rates. This reorientation of its communications was necessary to ensure that the interest rate normalisation process would be gradual and would not jeopardise the economic recovery, given the contrast between market expectations that were sceptical about rate rises and a macroeconomic scenario that made them necessary. Thus, in a sense the Fed switched on «auto pilot», raising reference rates up to the 2.25%-2.50% range.

At the actual stage, interest rates are no longer accommodative but rather are in neutral territory: they neither stimulate nor restrict the business cycle.2 A good example of this is the fact that, as we can see in the first chart, the current official rate is already very close to what the members of the Fed estimate to be the long-term neutral rate. Therefore, the end of accommodative monetary policy, coupled with the fact that the economy is in a mature phase of the cycle (where there is less certainty over the optimal path for the central bank), has led the Fed to alter its communications. In particular, given the importance of monitoring the business cycle at the current economic outlook in order to calibrate the upcoming interest rate movements, several voices from within the Fed argue that monetary policy should provide less forward guidance over the coming quarters and be more data-dependant instead.

The consequences of normalising communication

A key effect of giving a relatively precise indication on the future direction of monetary policy is the lower degree of uncertainty over how interest rates will evolve. To the extent that the central bank is credible to investors and analysts, they will align their expectations regarding the future path of interest rates with the Fed’s indications. As a result, financial asset market prices will be less volatile.

One way to test this conjecture is to analyse the sensitivity of market prices to the release of economic variables. Normally, when an economic indicator is higher than expected (for example, a higher-than-expected job creation figure), investors assume that the Fed could be forced to raise interest rates more quickly. However, if the Fed is credible in its future orientation, investors should be less sensitive to surprises in the data. Indeed, when we examine the sensitivity of US sovereign interest rates,3 we see how, since the Fed has been actively using communication to indicate the future trend in interest rates, the sensitivity of market prices to economic surprises has decreased.4 Therefore, it is possible that the greater focus that the Fed is placing on the trends in the indicators may be rekindling this sensitivity, which can come with greater financial volatility.

Relying on the indicators: which ones and what do they tell us?

From now on, it will once again be key to analyse in detail the indicators that the members of the Fed focus on when making their decisions. To this end, in the table below there is a list of the indicators that the Fed places particular emphasis on in its speeches, press releases and meeting minutes, and we show what the recent trend in each one of them suggests.

On the one hand, the main activity and labour market indicators are consistent with a strong economy that is growing above its potential. In addition, the trend in inflation and expectations thereof have not been a cause for concern for the Fed, as they lie around the target rate of 2%. On the other hand, we note how various financial indicators show a less encouraging trend. This could partly be a result of the more restrictive monetary policy that the Fed itself has carried out, with the aim of tightening financial conditions to curb the emergence of imbalances. However, the financial corrections also largely reflect the erosion caused by geopolitical tensions and worsening global investor sentiment due to fear that, with the expansion entering a mature phase, the sources of cyclical growth are becoming exhausted and the economy is slowing down more suddenly.

Faced with this combination of uncertainty, financial volatility and indicators that point in different directions, the Fed is likely to pause the current pace of rate hikes in order to assess more thoroughly the lagged macroeconomic effects of those implemented to date.5 Nevertheless, we must not forget that on the other side of the scales lie a labour market beyond full employment and a risk of the economy overheating. In this regard, the Taylor rule6 suggests that the official interest rate still currently stands 0.4 pps below the rate that inflation and unemployment prescribe. Therefore, this pause should not prevent the Fed from raising interest rates further in this cycle.

1. The Fed announced the end of net purchases of assets in 2014 and the gradual reduction of reinvestments in 2017.

2. The neutral rate is a non-observable variable that currently stands at 2.5%, according to estimates by K. Holston, T. Laubach and J.C. Williams (2017), «Measuring the Natural Rate of Interest: International Trends and Determinants», Journal of International Economics, vol. 108.

3. Specifically, we analysed fluctuations in the sovereign interest rate on the days when the US monthly employment report prepared by the Bureau of Labor Statistics (BLS) is released. The estimated sensitivity corresponds to the coefficient \(\beta\) of the formula \(\Delta i_t\;=\alpha+\beta\left(\Delta E_t-\Delta E_t^e\right)+\varepsilon_t\), where\(\begin{array}{l}\Delta i_t\;\\\end{array}\)indicates the fluctuation of the interest rate on the 2-year US sovereign bond on the day the job creation figure is released, \(\begin{array}{l}\Delta E_t\\\end{array}\) is the job creation figure published by the BLS and \(\begin{array}{l}\Delta E_{{}_t}^e\\\end{array}\) is the job creation figure expected by the Bloomberg consensus.

4. The increase in the sensitivity observed between 2014 and 2015 coincides with the period in which the Fed set a certain reduction in the unemployment rate as a condition for the first rate hike.

5. It is estimated that monetary policy takes at least 6 to 12 months to affect economic activity as a whole. See, for example, E.L. George (2019), «Are We There Yet?», The U.S. Economy and Monetary Policy. 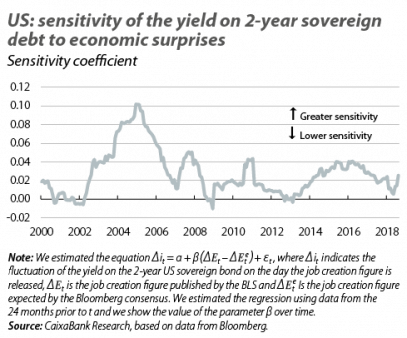 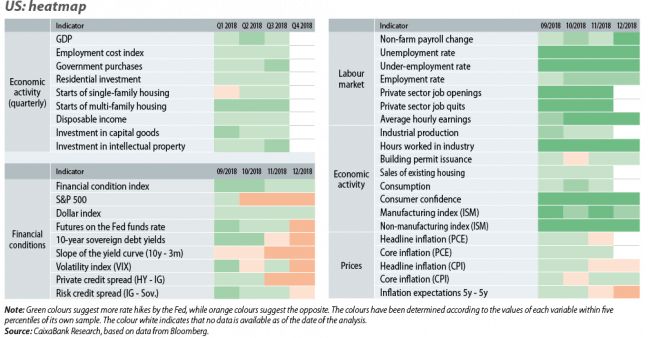 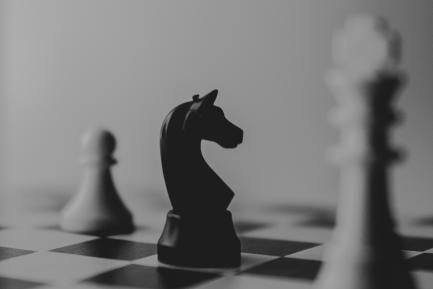