The ECB and the Fed: two mandates, one target

• The ECB and the Fed have initiated a process to review their strategy, the results of which will be published during the course of 2020. This review has been driven by certain structural changes in advanced economies, such as the decline in the equilibrium interest rate and the flattening of the Phillips curve.

• While we do not anticipate disruptive changes, it is likely that the Fed will reinforce the symmetry of its inflation target and that the ECB will adopt a similar model in order to shore up inflation expectations.

In January, Christine Lagarde formally announced a strategic review of the ECB’s monetary policy. In the US, the Fed began this same process in early 2019, and both institutions are planning to publish their conclusions in mid to late 2020.1 Could they raise their inflation targets (for example, up to 4%)? What about incorporating new monetary policy tools (such as extending asset purchases)?

What might change in this review... and what will not

To analyse the strategic reviews of the Fed and the ECB, we must distinguish between the central banks’ mandate and their objective. On the one hand, their mandates are determined by the US Congress and the EU Treaty, respectively - something that neither the Fed nor the ECB can modify.2 For instance, in the case of the ECB, article 105 of the Treaty assigns it the primary task of ensuring price stability, while in the case of the Fed, Congress entrusts it with ensuring price stability, maximum employment and moderate interest rates in the long term.

On the other hand, the objective of a central bank requires a quantitative interpretation of this mandate, and here the monetary institution does have some room for manoeuvre. For instance, following a first strategic review in 2003, the ECB went from defining its price stability objective as «inflation below 2%» to «inflation below, but close to, 2% in the medium term».

Why are both central banks now reviewing their strategy?

Various structural transformations have altered the environment and central banks’ capacity to act. Firstly, the fall in the equilibrium interest rate in major advanced economies3 increases the likelihood of reaching the minimum feasible rate (effective lower bound) and reduces central banks’ margin for manoeuvre to stimulate the economy in future recessions.

Secondly, the link between the performance of economic activity and inflation has weakened, as illustrated by the first chart for the case of the US. There are many reasons for this,4 most notably the decline in business margins, the impact of globalisation (which increases the proportion of goods and services that are imported) and uncertainty over the degree of slack of the labour market. In fact, on this last point various studies show that inflation dynamics in the euro area are best explained when we consider broader unemployment measures.5 Furthermore, in this context, inflation expectations have become much more important for determining inflation.

These transformations help to explain the Fed and the ECB’s repeated failure to comply with their inflation targets in recent years (in the euro area, the target has not been met since 2012) and they have led to a decline in inflation expectations (see second and third charts). This, in turn, reinforces the need to review the monetary policy strategies once the economic turbulence of the last decade has been overcome.

The questions they will answer

First of all, should the inflation target be redefined? In the face of the low levels recorded in recent years, a case has been made both for an increase of the target rates (in order to raise inflation expectations) and for a decrease (accepting that inflation is structurally lower). However, the central banks are unlikely to want to assume the loss of credibility that modifying the target when they are unable to reach it would entail. Thus, they are likely to maintain the 2% inflation targets and incorporate some small recalibration. On the one hand, the Fed has announced that it will maintain the 2% PCE target but will consider whether it is possible to refine it with rules that seek to compensate for the previous deviations around the 2% mark (for example, setting the target in terms of the price level or an average inflation rate of 2% over a given period).

Meanwhile, the ECB’s definition (below, but close to, 2%) has been criticised for being unclear (how close to 2%?) and for having a hawkish bias (in fact, since the year 2000, more than 60% of the inflation data have fallen below 2%). As such, the ECB could recalibrate the inflation target to clarify that it is a symmetrical target around the 2% mark. Moreover, keeping the 2% benchmark (rather than specifying it by a decimal point, for example, at 1.9%) would maintain a certain vagueness in the target, giving the ECB some flexibility.6

It may also be necessary for both banks to consider whether their reference indices measure inflation correctly. Problems such as the influence of globalisation on price formation and the degree to which the set of consumer price categories used in the indices is representative (for instance, the HICP captures the price of housing, essentially, through rentals and with a relative weight of just 6.5%) are challenges that the central bank must take into account.

Secondly, should they modify the tools they use to implement monetary policy? Both central banks used unconventional measures following the Great Recession (asset purchases and forward guidance) and could use these reviews as an opportunity to formalise their incorporation into the set of instruments available to them (which would make it easier to anticipate their reaction functions). They can also assess ways to implement monetary policy more efficiently. As an example, in 2008 the ECB decided to change the way in which it offered short-term liquidity, and since then it does so with a system that satisfies all requests (full allotment). In the case of the Fed, meanwhile, having decided in January 2019 that it would operate in an environment of abundant reserves, it could adjust the way it uses its official interest rates in order to better influence the target interest rate.7

Thirdly, is there a need to improve the communication of monetary policy? Communication is one aspect in which the Fed is, perhaps, ahead of the rest of the central banks. For this reason, we can expect this issue to be more present in the ECB’s review, with proposals to bring it more in line with its US counterpart. These could include the introduction of regular votes to approve monetary policy decisions or the publication of the ECB members’ expectations regarding long-term interest rates (particularly relevant for reducing uncertainty when embarking on a cycle of rate hikes).

All in all, the most likely outcome is that neither the Fed nor the ECB will be particularly disruptive. In the case of the ECB, the most significant change could be a revision of the definition of the inflation target to a symmetrical range around 2.0% (perhaps 1.5%-2.5%). Similarly, it is unlikely that the Fed will abandon its current inflation target, potentially opting to further emphasise the symmetry of the 2% target. In any case, both will have taken a first step in adjusting to changes in the economic environment which are generating much uncertainty. Therefore, it is possible that as their understanding of these structural changes improves further down the line, they will once again adjust their strategies accordingly.

1. The Bank of England and the Bank of Canada have also begun a review of their strategies.

2. In this regard, the process is unlikely to involve financial stability being added to their mandate.

3. This fall is due to factors such as population ageing, lower productivity growth and greater risk aversion. See the Dossier «The future of financial conditions: a paradigm shift?» in the MR02/2019.

5. See the Focus «Inflation and its determinants: a measure of our ignorance» in the MR02/2018.

6. See B. Cœuré (2019). «Monetary policy: lifting the veil of effectiveness». Speech given in Frankfurt. 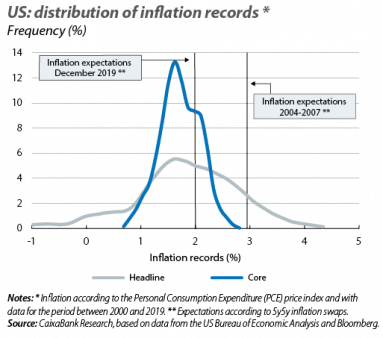 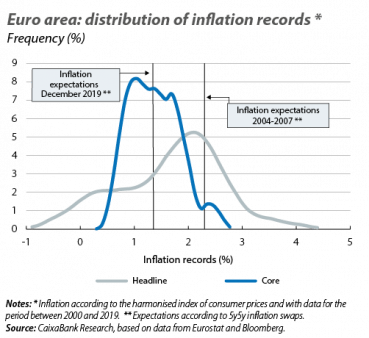