With inflation rates above 8% in the last six months, the Fed has embarked on an accelerated cycle of interest rate hikes. Prices began to rise in early 2021, and while for a few months most analysts were anticipating a transitory rebound as a result of the reopening of the economy in the wake of the pandemic, the fact is that the persistent rise in prices caught us all by surprise. In this Focus we analyse the pattern in the various inflation measures and their short-term outlook. 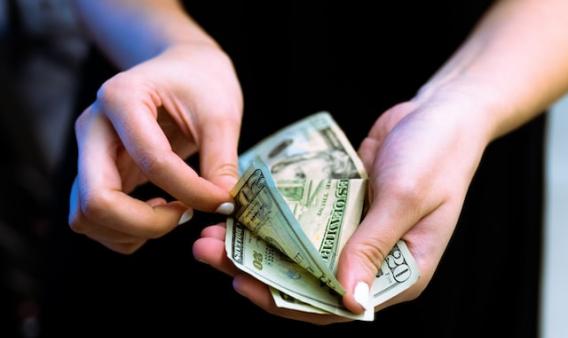 When we talk about inflation, we usually refer to the trend in prices of the typical basket of consumer goods (CPI, for consumer price index). In the US, inflation according to the CPI stood at 8.3% in August. Although down from the June peak of 9.1% (partly due to the sharp fall in gasoline prices), this is still very high.

However, in the US there is another measure of consumer prices which the Fed tends to pay close attention to and for which it makes forecasts, namely, the inflation of personal consumption expenditure (PCE). These two series have followed a very similar pattern since the year 2000: with slightly higher rates in the case of the CPI (around 0.3 percentage points higher). However, since the beginning of the pandemic, the divergence between the two has become evident, with the CPI standing around 2 pps higher so far this year (CPI of 8.3% versus PCE of 6.3% in July). Thus, while both series are well above the Fed’s 2% inflation target, the fact is that the PCE reflects a more contained rally in prices (see first chart). One reason for this recent divergence is that the PCE index does a better job of capturing the way in which many households are substituting certain goods with cheaper alternatives.1

On the other hand, it is worth mentioning other price measures that may be of interest, especially because of their power to predict the prices of the final goods we consume. In particular, the producer price index (PPI) is usually a good candidate (see first chart). This index measures the change in prices received by domestic producers for the goods and services which they sell. Using a simple econometric model which correlates the CPI with the PPI, and taking into account that the PPI has declined in recent months, the year-on-year price variation captured by the CPI should fall to around 6% by the end of this year.2 ,3 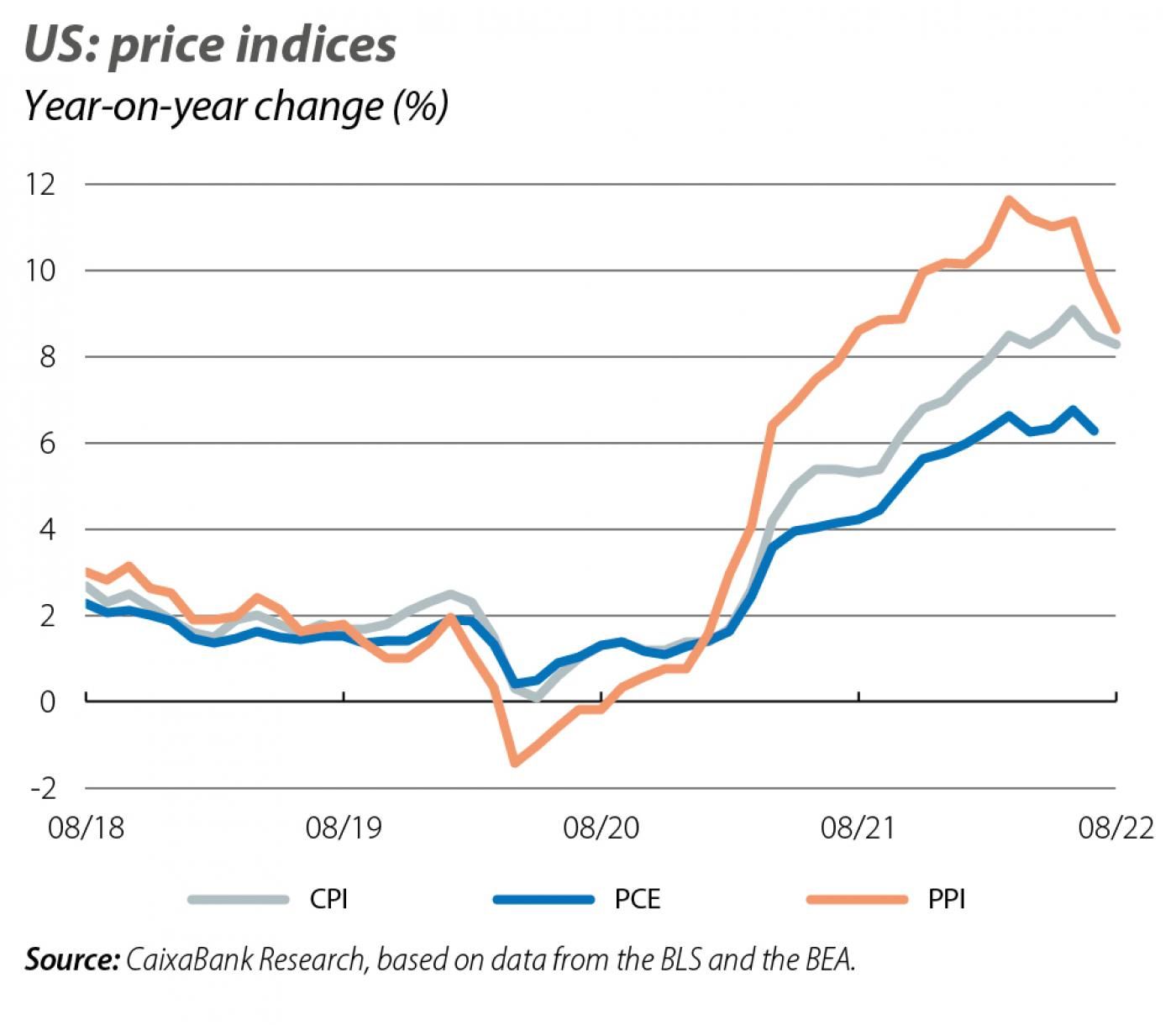 A number of factors will determine the path of inflation over the coming months: (i) commodity prices (especially energy and food), (ii) the resolution of the bottlenecks in global supply chains, (iii) the cycle of monetary policy tightening, and (iv) second-round effects.

With regard to commodity prices, US natural gas prices will remain high (relative to their pre-pandemic levels), affected by the rallies registered in the European gas benchmarks in recent weeks. However, the high level of reserves in Europe and the measures proposed by the European Commission to reduce consumption will help to contain upward pressures in Europe, and this should have a positive knock-on effect on the US gas benchmark.4

Food and industrial metal prices, meanwhile, have declined since Q2, so they should take pressure off both the PCE and the CPI in the coming months, both in the US and in other regions such as Europe (see table). In the case of metals, China’s slowdown and the crisis which its real estate sector is suffering have played a decisive role. In the case of food, meanwhile, the resolution of some of the problems in Eastern European ports (affected by the war in Ukraine) and a better harvest in some large producers such as the US are behind the recent fall in agricultural prices.5

As for the bottlenecks, the latest information shows a clear improvement. For instance, the cost of container ships has been falling since the beginning of 2022, following the peaks reached in the second half of 2021 (see second chart). This should also exert some downward pressure on inflation rates. The main risk in this area remains China’s zero-COVID policy, as the country is central to a large number of global supply chains. 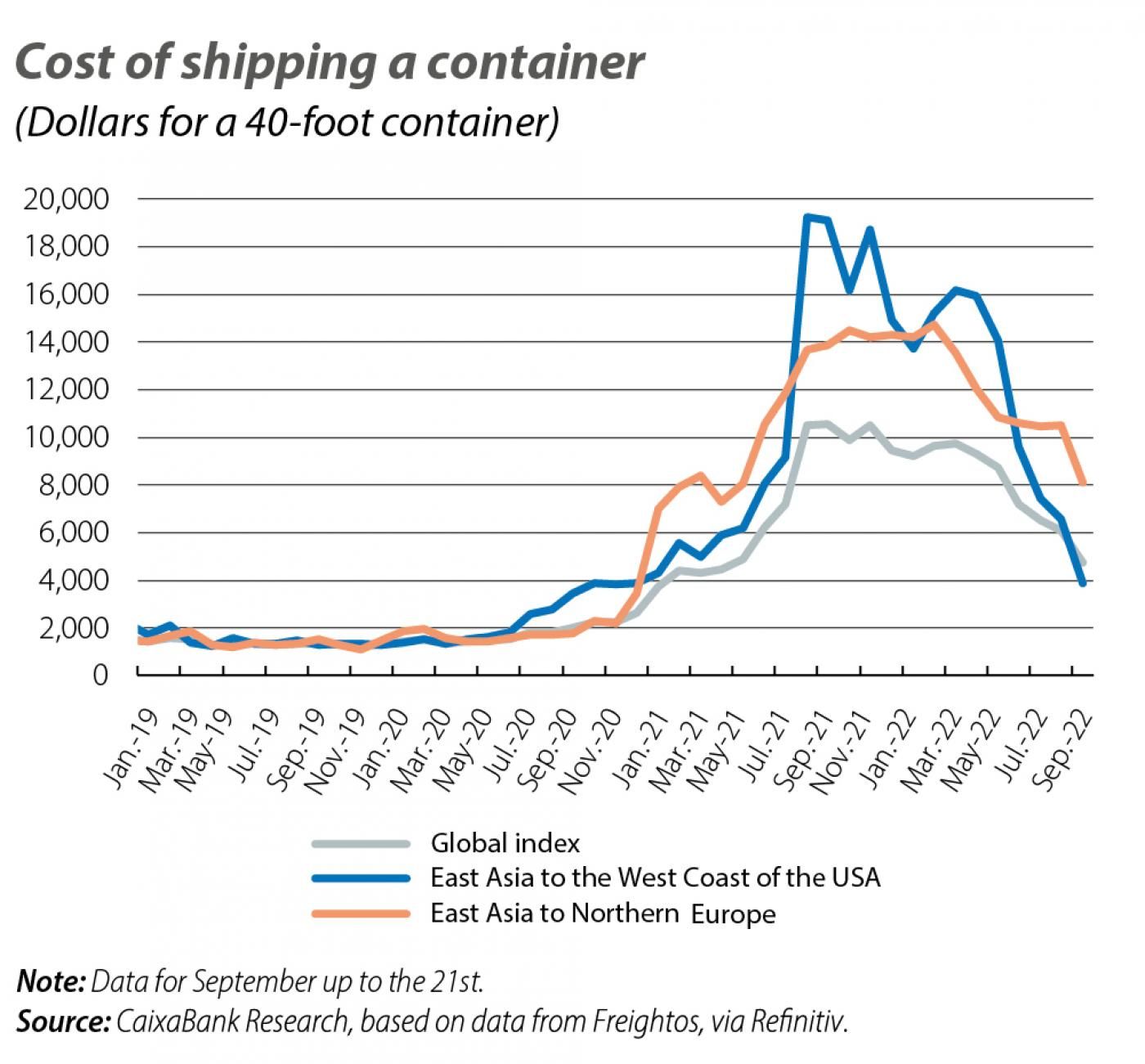 In the sphere of monetary policy, the Fed’s more hawkish stance, with faster interest rate hikes which are resulting in higher rates than were expected a few months ago, ought to take pressure of inflation by curbing demand, especially that of durable goods, which have been hardest hit by the bottlenecks.

Finally, although long-term inflation expectations remain close to the target (see third chart), a stressed labour market, with wage growth slightly above 5% year-on-year, underscores the risks of second-round effects for the US economy.

In short, there are factors on both the supply and demand sides which give cause to expect a shift in the inflation trend in the coming months, although it is still too early to claim victory. 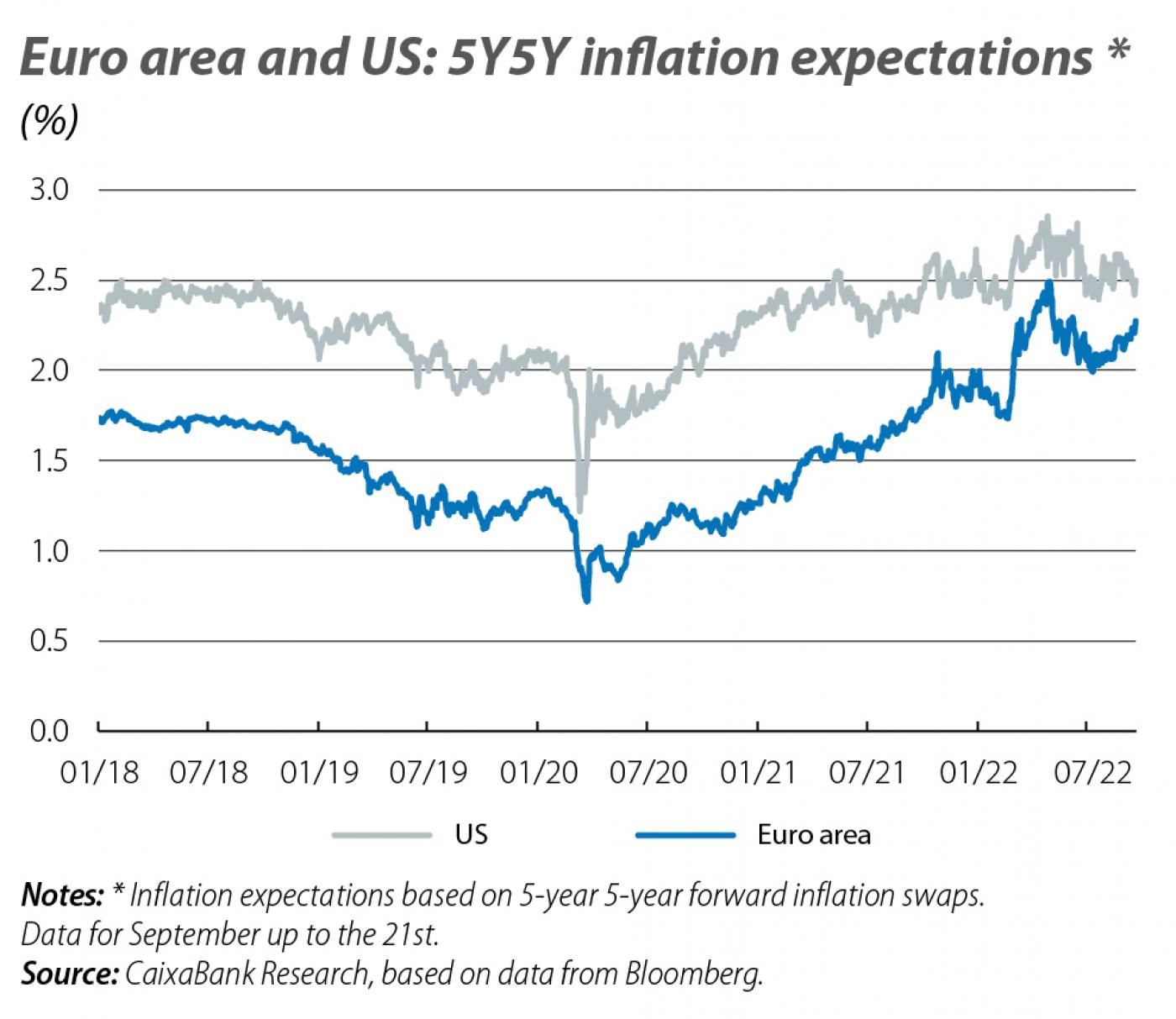