Illiberal forms of economic policy: evolution or radical change from the existing consensus?

In 2018, on the occasion of its 175th anniversary, the weekly publication The Economist stated that: «Liberalism created the modern world, but the modern world is turning against it». This is no light statement, coming from the publication that has embodied a liberal vision of society, politics and the economy come hell or high water. But is this really the case? In this Dossier we will analyse, from different angles, whether economic policies are shifting away from what, broadly speaking, could be considered orthodox practices and what might be the causes and effects of this shift. With this goal in mind, the logical starting point for this first article of the Dossier is to try to precisely define what we mean when we talk about the «emergence of illiberal forms of economic policy».

An attempt at a definition: what are illiberal policies?

In order to understand what we refer to as illiberal (economic) policies, we must first define what we mean by liberal economic policies, since they will serve as our frame of reference. We will then be able to assess the extent to which the economic policies of recent years diverged from this framework.

The essential idea is that there is a reasonably broad and consolidated consensus among economists about what characteristics are shared by economic policies that predominantly improve countries’ economic prospects, both in the short and long term. Far from any simple and universal recipe («do this and the economy is certain to grow more in the long term»), there are a few general principles that are sufficiently common across the board. This is what Rodrik (2005) refers to as first-order economic principles, and they can be defined reasonably accurately by collating a broad series of contributions from across the economic literature of recent decades.1 In particular, these principles emerge from reviewing three major areas of academic work: that which rethinks and modernises the economics of development,2 that which guides the transition towards a market economy in the former planned economies3 and, finally, that which draws conclusions on how economic policy should change as a result of the lessons learned from the Great Recession of 2008-2009.4

So, what are these first-order principles of economic policy on which there is a reasonable consensus? In general terms, we can identify four major areas:

• The markets for productive factors and for goods and services have to be competitive, since this is the primary mechanism for generating efficiency in an economy.

• The macroeconomic and institutional framework has to generate an environment that facilitates stability, since such stability offers conditions (credibility, the anchoring of expectations, the reduction of uncertainty, etc.) which improve the prospects for growth, both in the short and long term.

• Integration into global flows of goods, services and factors is essential in order to improve the prospects for creating prosperity. This integration also has to be as «undirected» as possible.

• The critical long-term economic policy is that of supply, and it has to be coherent with the two previous principles. For example, an industrial policy that tries to select specific sectors or firms (picking winners) tends to be less effective than a broader industrial policy that addresses competitiveness factors that are common to most sectors.

These principles generally share a liberal approach to understanding what the best way for an economy to function is, namely the conviction that growth is the best way to increase prosperity for society as a whole.5 Thus, in this article, as in many others, we categorise this set of principles as the liberal consensus on economic policy.

Therefore, if these are the characteristics or, to be more precise, the principles which guide a liberal approach to economic policy, a departure from them will entail an increase in the degree of illiberalism (a new term that first appeared in the 1990s). In other words, in this Dossier an illiberal economic policy will be understood as one which is significantly removed from all or some of the principles set out above.

A moderate or radical shift from the core principles?

At this juncture, an important question is to what extent this illiberal departure merely represents a more or less pronounced evolution in the consensus or, on the other hand, something more disruptive. Answering this question, however, is no easy task. As the economic literature has highlighted, there are multiple variants of economic policy that can all be considered liberal.6 One example, within the principle of macroeconomic stability, would be everything related to central banks. A fundamental truth in this field of macroeconomic stability is that such stability is difficult to achieve without a framework for monetary stability, and in order to attain such monetary stability it is considered essential to have an independent central bank. The specific institutional manner in which this independence is established is not predetermined, with the system of the Fed and that of the ECB offering just two of many different varieties that do not alter the aforementioned principle. Similarly, monetary policy can be implemented in different ways. For instance, the goal of the Fed, as expressed by the mandate assigned to it by Congress, is to support three objectives: to achieve price stability, to achieve the highest possible level of sustainable employment and to have a moderate long-term interest rate. In contrast, in the case of the ECB only the first variable is considered essential. No one disputes that both alternatives allow their respective institutions to contribute to ensuring macroeconomic stability.

Up to this point, there should be little debate: two distinct institutions with two different policy mandates can be equally liberal. In contrast, a more controversial matter could be assessing the unconventional monetary policy followed by many central banks after the financial crisis. In 2016, the Centre For Macroeconomics,7 a British institution, asked a panel of economists about the role and consequences of unconventional monetary policy. The responses confirmed the division that this topic generates. As an example, some interviewees stated that these unconventional policies were quasi-fiscal interventions that could end up damaging the independence of the central banks. These are strong arguments that would place these practices at the limit of the liberal consensus, if this were the opinion held by the majority and there were evidence to support it.

Beyond the personal views of the authors of this article (we cannot resist expressing that, in our view, unconventional monetary policy, as it has been implemented up until now, is a practice that falls within the principle of seeking macroeconomic stability in the liberal manner set out above), what is important is to understand the difficulty in the real world of objectively judging whether a particular economic policy approach is liberal or not, especially if it is not an extreme approach. In order to avoid, insofar as possible, the subjective biases that are inherent to a value judgement, in the next article of the Dossier we will quantify in a reasonably precise manner the extent to which this departure from the liberal consensus is occurring. Only then can we say that we are entering unknown territory, that of illiberalism, and begin to reflect on causes and consequences, two questions that we will explore in articles three and four of this same Dossier. At the risk of revealing too much (spoiler alert), we can say now that the departure from liberalism, which has occurred in a relatively short period of time, is significant and, in our opinion, should not be taken lightly.

2. In addition to Rodrik, also see J. Williamson (1990). «Latin American Adjustment: How Much Has It Happened?». Washington, D.C.: Institute for International Economics; J. Williamson (2000). «What Should the World Bank Think about the Washington Consensus?» World Bank Research Observer, 15(2): 251–64. And A. Saad-Filho (2010). «Growth, poverty and inequality: From Washington consensus to inclusive growth». New York, NY: UN.

3. See T. Besley, M. Dewatripont and S. Guriev (2010). «Transition and Transition Impact: A Review of the Concept and Implications for the EBRD». Report for the EBRD’s Office of the Chief Economist.

5. This conception of the economy does not fit into the redistributive mechanisms that must be articulated once the objective of increasing the well-being of society as a whole is achieved.

6. In this regard, see Rodrik (2005), who has developed the idea of «one common principle, many feasible institutions». 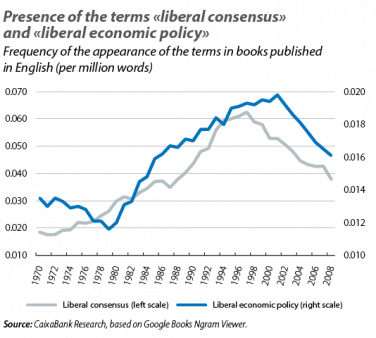