• In mid-December, the US and China announced that they had reached a trade agreement. Specifically, they agreed on a Phase One deal (of a total of three phases), which should resolve the trade war in which the two powers have been embroiled since early 2018.

• Despite the shortage of technical and legal details, the assessment of the agreement is positive. In particular, this is because it reduces trade uncertainty in the short term.

Firstly, the US did not proceed with the tariff hike that was due to come into force on 15 December 2019 and which would have affected some 160 billion dollars of Chinese imports (mainly consumer goods). It also proceeded to lower the tariffs imposed in September 2019 (from 15% to 7.5%) on around 120 billion of imports from China (see first chart for the current tariffs and trade flows).

Thirdly, the agreement covers issues relating to intellectual property rights and technology transfers, matters on which US companies operating on Chinese soil are subject to pressure. The inclusion of these topics, which are so important yet so delicate, was not initially envisaged in this first round.2 While we do not expect this to immediately resolve the multiple demands in this field, their mere inclusion was very well received by the financial markets, especially in the prices of technology stocks, the sector most affected by this part of the conflict. This is well illustrated in the second chart, which shows how the markets reacted more to the publication of such details than they did to the initial announcement of the agreement.

Fourthly, China has undertaken to reduce the current barriers faced by US companies in the agricultural and financial sectors. In the latter case, for instance, limitations exist on foreign capital invested in Chinese financial companies and there are regulatory requirements that discriminate against foreign companies.

Finally, the agreement includes a chapter that sets out currency practices that are to be avoided (such as competitive devaluations) and the need for a high degree of transparency in the setting of exchange rates.

After agreeing on this First Phase, during 2020 the US and China will continue negotiations to reach trade agreements on Phases Two and Three. This could lead to the gradual roll-back of the tariffs currently in force, although it should be borne in mind that the issues to be addressed in the following phases (such as the opening up of Chinese markets and delving deeper into aspects relating to intellectual property and technology) are extremely demanding.

Such agreements would have a positive impact on global economic activity due to the reduction of protectionist measures (direct channel) and, above all, the reduction of uncertainty (indirect channel).3 In fact, the decrease in uncertainty and its positive impact on economic confidence would be the main driver of the improvement in global economic activity, just as it was the main culprit behind its deterioration during 2019. In any case, the recovery of confidence will be a very gradual process: investors have already seen on previous occasions how this conflict appeared to be back on track, only to escalate once again.

2. See «The US and China: escalation of the trade conflict» in the MR05/2018 for more details on the triggers of the escalation in trade tensions between the two countries.

3. See «The threat of protectionism in the global economy» in the MR07/2019 to understand the ways in which the impact is transmitted through the direct and indirect channels. 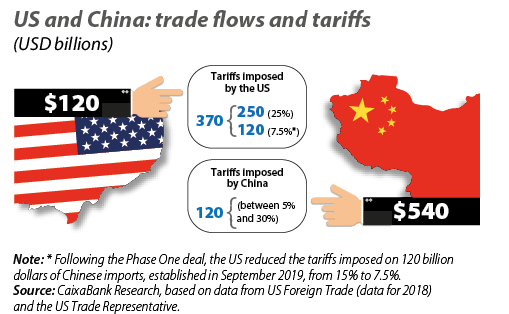 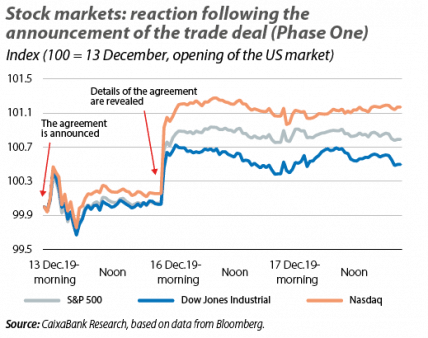