Geopolitics in a globalised world: let the data speak for themselves!

Geopolitics is currently very much in vogue. However, the views provided by most analysts in the media are limited, a mixture of data and opinion. This article looks at how both the current state and trends in geopolitical relations can be measured objectively.

The term «geopolitics» was coined by the Swedish political scientist Rudolf Kjellén early in the 20th century. It was initially defined as the study of geography’s influence on international relations. This definition has gradually evolved, and geopolitics currently refers to any event associated with international relations and the political power interactions between different states and territories.

One way to characterise the state of global geopolitics is by examining the trends in armed conflicts.1 The first chart shows that conflicts with international connotations have tended to increase in the last decade while purely internal conflicts have been in decline since the early 1990s. The percentage share of conflicts with over 1,000 deaths has also decreased notably since the 1950s.

The GDELT database is a source of more detailed information on conflicts. This uses cutting-edge algorithms to obtain real-time data on geopolitical events from the news items produced by a large number of media, including Google News. Based on these data, we have produced a conflict index2 (the percentage of conflicts out of the total number of events). This variable covers not only material but also verbal conflicts. The second chart reveals three distinct periods. The 1980s were a period with high geopolitical tensions; the 90s were relatively calm while the percentage of conflicts has risen again in the period 2000-2017. However, it should be noted that there was a significant drop in the relative number of conflicts between 2016 and 2017. This suggests that, contrary to what might be expected, geopolitical tensions did not increase at a global level in 2017.

1. See the note for the first chart for more details regarding the definition of armed conflict.

2. See the note for the second chart for more details regarding the methodology used to produce the index.

3. The lineal correlation coefficient between the two indices is –0.72. 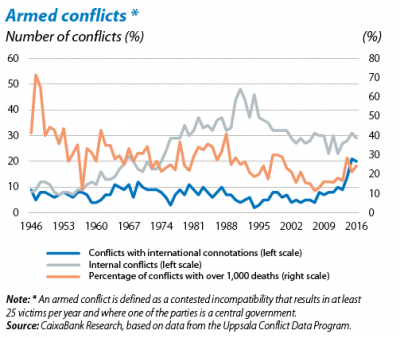 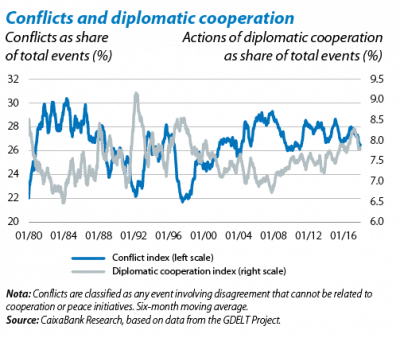 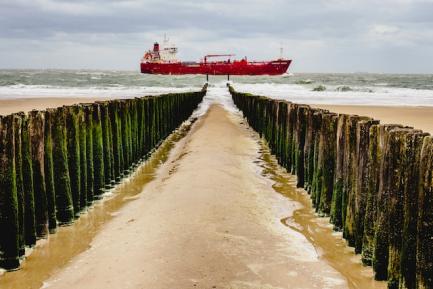