The illiberal shift in economic policy: let the data speak!

There is a perception in recent years that there has been a proliferation of economic policies, and political approaches in general, that diverge from what could be called the liberal consensus. By this, we refer to a series of elements on which consensus had been reached among economists and economic policy-makers as the preferred approach for improving economic prospects (see the article «Illiberal forms of economic policy: evolution or radical change from the existing consensus?» in this same Dossier). However, in order to determine whether this perception is a reality, we must find a way to quantify this shift towards more illiberal policies as accurately as possible. It is precisely this endeavour that will be the goal of this article, which proposes an explicit measure of the illiberal shift that will allow us to explore which areas of economic policy have seen a greater departure from the liberal consensus.

Identifying and quantifying the illiberal shift

As mentioned in the previous article of this Dossier, although distinguishing a liberal economic policy from an illiberal one is feasible in theory, making such a distinction in practice is not so simple and, furthermore, ideological biases are difficult to eliminate. In order to address this challenge, one possibility is to «translate» political proposals into some form of quantitative measure. This is the exercise carried out by the economists De Bolle and Zettelmeyer (2019). This exercise allows us to obtain a numerical measure of just how liberal the election programmes were among the parties participating in elections held before and after the Great Recession of 2008-2009, across a large group of countries.1 This measure is developed on the basis of an assessment of the various economic proposals of the parties contending the elections in question, assigning each one a numerical value according to its degree of illiberalism.2 In this Dossier, we have used the information available in this exercise by De Bolle and Zettelmeyer so as to illustrate the issues that interest us, namely the way in which the illiberal shift is materialising, its causes and its effects.

Specifically, seven spheres of economic policies introduced by these economists have been used in order to «translate» the first-order principles defined in the first article of the Dossier into specific areas. This allocation is as follows:

• The departure from the principle we call «competitive markets for productive factors and goods and services» is assessed by analysing the economic policy sphere known as «illiberal competition policy».

• The assessment of the macroeconomic and institutional framework aimed at ensuring stability is conducted in the sphere of «macroeconomic illiberalism».

• Departure from the principle of liberal supply-side policies is assessed through the sphere «illiberal industrial policy».

For each of these spheres, a measure is obtained that approximates the degree of illiberalism present in the political manifestos of the various parties in each country, weighted by each party’s share of the vote in the elections in question. Finally, averaging the results of the seven spheres in each country provides an aggregate measure of illiberalism.

Which areas explain the shift towards a more illiberal policy agenda?

We are now in a position to answer the question of how the illiberal shift has materialised. When we analyse the spheres mentioned above, a first observation is that all of them, with the exception of restrictions to FDI, have diverged away from liberalism towards illiberalism.3 The extent of this divergence is quite varied, being more apparent in the spheres of macroeconomic illiberalism and restrictions to immigration, followed some distance behind by changes in the spheres of illiberal industrial policy and restrictions to international trade. It should be noted that these spheres are central to the current orthodox consensus on economic policy, as they encompass issues such as having an adequate macroeconomic stability framework (which includes key aspects like having an independent central bank) and the assumption that integration into the global economy and financial system is key to generating prosperity.

A logical question at this point in the discussion is to try to determine the scale of these quantitative changes in the measure of illiberalism. In the absence of sufficient temporal context (unfortunately, a comprehensive history of elections is not available), what can be compared is the variation between countries, from which certain information can be extracted. Specifically, if we choose the US – a country which, historically, we can clearly associate with the liberal consensus – and we compare it with China – a state that we can qualify as illiberal without too much discussions –, the difference in the degree of aggregate illiberalism (the average of the seven spheres) is 0.9 points. Therefore, a deterioration of 0.2 points in the aggregate index and for a broad set of countries in a relatively short space of time should not be looked upon with complacency.

Advanced and emerging countries: two increasingly similar worlds at the aggregate level, but with differences depending on the sphere

The above conclusion is reinforced even more when we analyse the differences observed between advanced and emerging countries. The illiberal shift materialises with few differences between the two groups, at least at the aggregate level, such that the gap in the degree of illiberalism between advanced and emerging markets remains stable in a context of an increase in the phenomenon. However, the spheres affected are somewhat different: whereas the areas that undergo the biggest changes in more developed countries are immigration policies, anti-multilateralism and restrictions to international trade, in emerging countries the two main areas are macroeconomic illiberalism and that of industrial policy.

As for individual countries, the most illiberal countries are Russia, India, Italy, China and South Africa. With the exception of China, which has seen a significant drop in its degree of illiberalism over the period in question, all four other states are among those that have seen the biggest increase in their illiberalism. At the other end of the spectrum, the most liberal countries are, in this order, South Korea, Japan, Canada, Australia and the US. In the first three, illiberalism has fallen, while in the last two it has increased, albeit not excessively.

Ideology matters and is expressed in different spheres

When we analyse the preferences expressed in electoral programmes and their tendency to shift towards greater illiberalism, as might be expected the differences between what we will refer to as left and right, for the purposes of simplicity, are quite stark. For starters, the data suggest that parties on the left of the political spectrum tend to shift more noticeably towards illiberalism than those on the right. Here the reader could raise the possibility that right-wing parties were already more illiberal before the period studied (i.e. left-wing parties had more room to diverge from liberalism). Nevertheless, the available data suggest that there is no clear relationship between parties’ level of illiberalism and the change observed in recent years.

In short, this review of the data provides an important conclusion, in addition to confirming the shift towards illiberalism taking place in economic policies: there are notable differences depending on the sphere of economic policy in question beyond the type of country and party ideology. This will be the fundamental line of investigation for determining, with reasonable accuracy, the root causes of the departure from the liberal consensus. Follow us in the next article to the heart of the study on the causes of the illiberal shift.

1. Specifically, De Bolle and Zettelmeyer (2019) analyse, for each country in the G-20, the programmes of the parties participating in elections before (typically held between 2004 and 2007) and after the Great Recession (the election following the crisis is avoided, in order to best capture more permanent preferences, such that the majority are held between 2014 and 2017). See M. De Bolle and J. Zettelmeyer (2019). «Measuring the Rise of Economic Nationalism». Working Paper 19-15. Peterson Institute.

2. The scale ranges from 1 to 5, where a 1 is allocated to clearly liberal political proposals and a 5 to clearly illiberal proposals. For illustrative purposes: in the field of competition policy, if a party proposes that cartels are illegal and that an independent authority in the field of competition is essential, this measure will be allocated a score of 1. Meanwhile, if another proposes abolishing this authority in order to foster the formation of cartels or monopolies and thus create «national champions», it will be given a score of 5.

3. In the case of restrictions to FDI, it should be mentioned that is a sphere for which only a minority of parties express their preferences, so we should not read too much into this somewhat atypical situation. 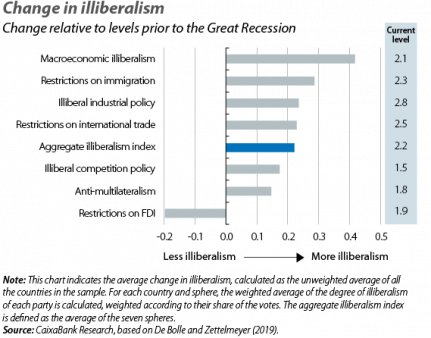 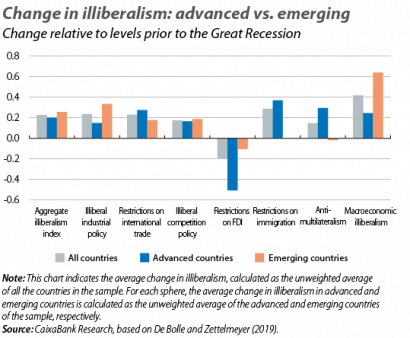 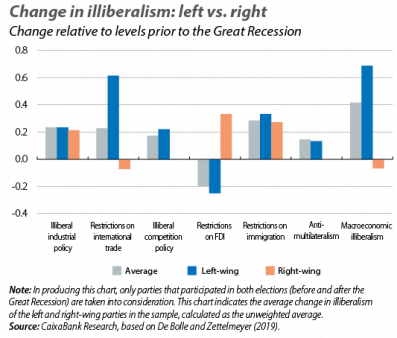