The economic impact of the dreaded coronavirus: should we be worried?

• Without a doubt, the coronavirus will have a negative impact on China’s economy and that of the rest of the world in 2020. At present, however, it is very difficult to give a precise estimate of this impact.

• An initial estimate indicates that if the epidemic reaches its peak in Q1, the impact on economic growth could be relatively contained: –0.4 pps in China and –0.2 pps for the global economy.

At the end of December, the Chinese authorities detected the existence of a new coronavirus (the so-called COVID-19) in the city of Wuhan. In January, the World Health Organization (WHO) declared a global health emergency and the financial markets were hit by fears that it could have a high economic cost. To what extent should we be concerned about the economic impact of the virus?

The economics of the coronavirus

Through what channels could this negative impact on growth in China and in the world materialise? Starting with China, faced with the effects of the virus and the uncertainty that accompanies it, we will see a significant reduction in household consumption, linked to either fear or the restrictions imposed by some authorities on going to public spaces (a pattern already observed in another epidemic in 2003, with a 5.0-pp drop in the year-on-year growth of retail sales in the three most severely affected months). In parallel, the lower economic activity associated with mobility restrictions and the increase in workforce absenteeism are other factors that could erode the economy. In fact, there have already been disruptions of this type, with limitations on tourism, the prolongation of the Chinese New Year holiday, the closure of shops and problems in production due to interruptions in supplies.

At the international level, the lower influx of Chinese tourists, the reduction in exports to the Asian giant, disruptions in global supply chains and even the spread of the virus beyond China (the numbers we will present in this article assume that the epidemic is confined essentially to China) are the main channels through which it could take a toll on the global economy.

Before assigning figures to these disruptions, it is important to stress that it is very difficult at the present juncture to make accurate estimates of the impact of the coronavirus epidemic on global economic activity. This will largely depend on our ability to contain the virus, which in turn depends on how the health crisis is managed, the availability of vaccines, the possibility of the virus mutating and of the epidemic spreading to other countries.

In order to shed some light on the possible impact, it is useful to compare the current coronavirus episode with SARS (Severe Acute Respiratory Syndrome), a coronavirus that originated in China in 2003 and which shares some similarities with the current situation. This previous episode suggests that these types of phenomena can entail a substantial economic cost, but that their impact tends to be contained in both time and geographical scope, and they are followed by a rebound in economic activity in the following quarters.

All in all, while this is a useful comparison insofar as it provides a benchmark to compare against, it is far from conclusive in itself: they are different diseases, and the state and weight of China’s economy in the global economy is very different now compared to back in 2003. In fact, the current coronavirus is more contagious than SARS (at the beginning of February, the number of people affected by the coronavirus was already triple those affected by SARS in 2003), suggesting that it could spread further and lead the authorities to impose bigger restrictions. However, it has a much lower mortality rate (around 2%, compared to 10% in the case of SARS). It should also be borne in mind that SARS reached its peak in terms of the number of people affected daily fairly quickly, in April 2003 (the WHO had declared a global emergency on 12 March), but from then on the rate of its spread slowed and by July it ceased to be a threat.

Focusing on the macroeconomic figures, the impact of SARS on China’s GDP was concentrated in Q2 2003, in which growth slowed by 2.0 pps (going from 11.1% in the first quarter to 9.1%). This slowdown is very similar to that captured by our economic activity index, which measures the real-time evolution of the economy based on the main economic sectors. In the third quarter of that year, however, the growth rate recovered, propped up in part by fiscal and monetary stimulus programmes. Although estimates of the impact that SARS had on growth for the year as a whole differ, they tend to be in the range of a few decimal points. In fact, the IMF’s report for the following year spoke of an insignificant impact, which is not surprising for an economy that ended up registering growth of 10% that year.

If we assume that, like SARS, the coronavirus reaches its peak in Q1 2020 and loses strength from then on, then the cost for the Chinese economy in terms of GDP growth could be around 0.4 pps. This entails the economy coming to a complete standstill in the first quarter (0% growth relative to the previous quarter), with a rebound beginning in the following quarter. In this scenario, which serves as our baseline forecast, growth would be 5.5% instead of the 5.9% that we envisaged previously. However, if the epidemic were to be prolonged and were not contained until Q2, Chinese growth in 2020 might drop to around 5.0%.

Beyond the impact in China, what would be the impact on the global economy? If we take our estimates for the impact of a slowdown in China and apply them to the rest of the world1, then the impact on global growth would be around 0.2 pps, with a variable effect depending on each economy’s degree of integration with the Chinese economy.

We cannot end the article without emphasising the high degree of uncertainty that exists over the impact of the coronavirus outbreak. At the global level, the repercussions are likely to be somewhat greater than in 2003, given that China is now much more integrated into the global economy (it currently represents 17% of global GDP, versus the 4% it represented in 2003). At the domestic level, the Chinese economy also has a very different productive structure compared to in 2003: the relative weight of private consumption is now lower (39% of GDP, versus 43% in 2003), while there has been a rise of e-commerce. This combination may dampen the negative impact of the COVID-19 virus to some extent. However, the message of this article is clear: the coronavirus is a source of significant risk that will affect the growth figures for this year. It is, therefore, a phenomenon to be monitored very closely, and not only from a medical perspective. 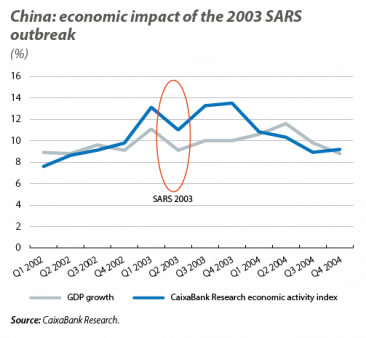 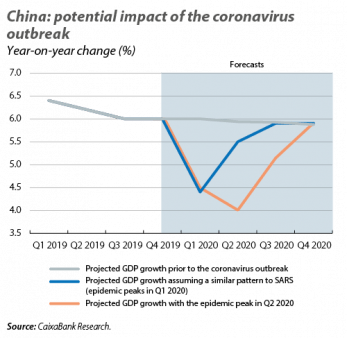